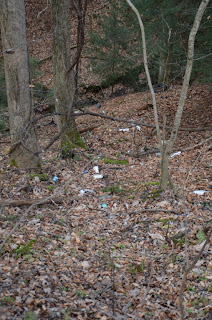 Looks can be deceiving. This trash-strewn Jackson County, Ohio gorge is actually a beautiful place, and would look nearly pristine were it not for the cascade of old appliances, bottles, mattresses, fast food containers and various and sundry other junk. It never fails to amaze me how people can so thoughtlessly abuse their own environment. But this is an all too common garbage disposal technique in southern Ohio - cast the rubbish down the steepest slope around.

We - Nina, Heather, and I - were standing roadside here last Saturday, doing our best to pick up the nasal tinhorn trumpets of a Red-breasted Nuthatch. We were tallying avifauna for the Beaver Christmas Bird Count, and our mission was to find as many birds as possible, and the little nuthatch had thus far eluded us. Across the steep-sided ravine was a wall of stately Eastern hemlock trees, their lacey evergreen boughs providing a jarring contrast to the avalanche of litter on our slope. 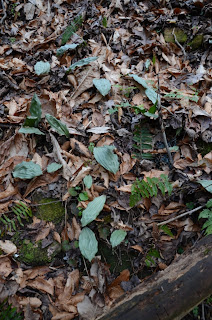 Suddenly, sharp-eyed Nina announced a nice find, but not of the feathered kind. She had spotted a small colony of one of our most interesting orchids, the puttyroot, Aplectrum hyemale, far down the hill. This find is proof that binoculars come in quite handy when botanizing, as our optics allowed for good views and confirmation of the identity. 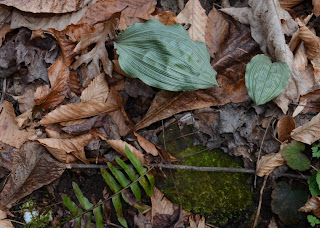 Distant views through the bins simply was not good enough, and we slip-slidingly wallowed our way down the treacherous slope. Not only was there jaggedly dangerous rubbish to contend with, but damp leaves cast over muddy ground on a 1 to 1 grade makes for tough hiking. But we eventually arrived at the orchid patch, and I was able to make some photos.

Here we see the distinctive overwintering oval-shaped puttyroot leaves. They are blue-green and thinly pin-striped, like the fabric of some fashion-challenged pimp's zoot suit. The color and pattern look quite nice on these leaves, though. As is so often the case with flora and fauna, the scientific name is instructive: Aplectrum =  "without spur", which refers to the flowers' anatomy. The specific epithet hyemale is more telling - it means "of winter". 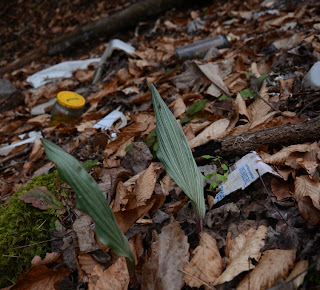 Puttyroot - and its ally the cranefly orchid, Tipularia discolor - are unusual in that they are more easily found in the dead of winter. Their leaves push from the rich humus of mature forests in fall, and persist throughout the winter, doing their photosynthetic magic and pumping sugars to the underground parts. 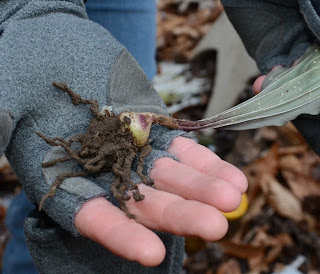 Here is the source of the orchid's common name. The tuberous root does indeed resemble a glob of putty. Within this subterranean structure all manner of orchidological magic is taking place, even when northern plant enthusiasts' minds are far from flowering plants, let alone tropical orchids. Throughout our coldest snowiest months, the puttyroot leaf is capturing the feeble short-lived rays of the winter sun, and building up steam for next spring's botanical eruption. We of course replanted this specimen back in its niche after taking photos. 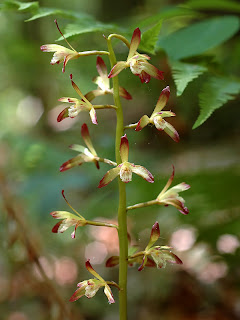 Photo courtesy Delaware Wildflowers: http://www.delawarewildflowers.org/
Voila! Come mid-May, after the pinstriped leaves have largely withered to nothingness, the puttyroot sends forth a beautiful spire of delicate orchid blooms. Their flowering takes place in a very different landscape than the winter scene in which the leaves are found. Nina's plants, when they blossom, will be serenaded by Louisiana Waterthrush, Hooded and Worm-eating warblers, Scarlet Tanagers, and myriad other songbirds. The orchids will add their radiance to a sea of showy spring wildflowers such as toothworts, large-flowered trillium, and wild blue phlox. 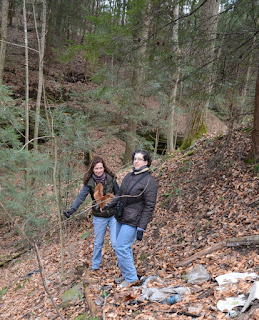 That's Nina on the left and Heather on the right, deep within the puttyroot gorge. As we inspected the area, we were delighted to notice many of the massive leaves of the very rare umbrella magnolia, Magnolia tripetala, littering the forest floor. This exotic treelet is at its extreme northern limits here, and is listed as threatened in Ohio. We probably would not have noticed the magnolias had not the orchids' allure enticed us down the slope.
at December 21, 2011

Nice piece, Jim. I've enjoyed Aplectrum leaves for many, many years, but like Tipularia (and many other orchids, for that matter), it doesn't bloom every year. In fact I have never succeeded in finding Aplectrum in bloom! Of course I do sometimes get distracted in May ...

Thanks. I didn't know this orchid although where I live in SW FL, we are the orchid capital of North America. You might be interested in this blog:

Hi Mark, yes, one does see scads more leaves than flowering spikes. I've seen blooming puttyroot a number of times but have yet to get a decent photo. Look forward to seeing you at New River!

Thanks for the link, Vince. Still would love to see a ghost orchid in bloom!

The ghost orchid at nearby Corkscrew Sanctuary had as many as 7 blooms the last few years but that can be anywhere from late July to October. I saw my first one about 10 years ago on a swamp walk down in the Fakahatchee Strand after wading in waist-high water with alligators, water moccasins and hordes of mosquitoes (Biblical proportions) all in a pouring rainstorm. What fun!

Wow, the flowering spike of the Puttyroot is beautiful! I would like to get back there in May to see it in bloom. Would the magnolias be in flower at the same time?
And thanks for highlighting the trash dumping. It always makes me furious to see such thoughtless pitching of refuse over hillsides like this.

Generally the magnolias bloom a week or so later, heather, but there could be some overlap. If time permits, i'd love to revisit this site in late May and finally take some decent puttyroot flower pics!

We love puttyroot orchid! It's always a cause for celebration when we stumble across it. Happy winter solstice!