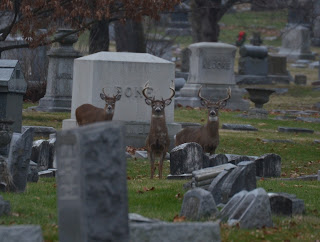 Last Sunday, Bernie Master and I were patrolling the expansive Green Lawn Cemetery on the south side of Columbus, Ohio, tallying birds for the local Christmas Bird Count. Suddenly a bonus trotted into view - these three buck white-tailed deer, Odocoileus virginianus. They were accompanied by five anterless deer, does apparently. 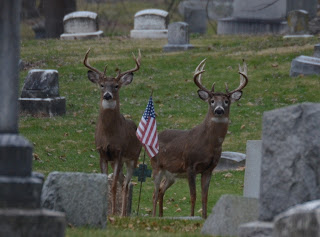 These two were the studs, without doubt. Anytime the antlers (rack) flares outward beyond the ears, the animal will look impressive. By my reckoning, both of these beasts are 10-point deer. The terminus of each antler branch, or tine, counts as a point and in the eastern U.S. the custom is to add all of the points up for the point score. In the west, they typically count only one side, so on the other side of the Mississippi these would be five-pointers. 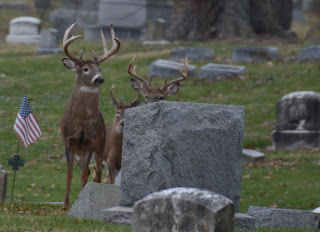 Eight of the points are obvious (the small central brow tines count). Look closely and you'll see a small spur tine on the forward right beam of the deer on the left side of the photo. Both of the big bucks had these small spurs on both of their beams, and by Boone & Crocket rules a tine must be at least one inch to qualify as a point. By my eyeball reckoning, they were, thus the animals are ten-pointers.

A big white-tail buck can go 250 pounds or more, and I'd say these two were in that range. You can see a lesser male in the backdrop, peeking between the studs. I'm sure many a hunter would dearly love to harvest one of these animals, but these deer are completely off limits within the confines of the 360-acre cemetery.
at December 23, 2011

How did they get in there? There is city all around that graveyard.:-O I thought Columbus was a cow town, not a deer town.:-D I guess I'll have to watch out for bucks when I head back down there :-D

Hi Steve, Green Lawn is 360 acres, and these deer probably seldom if ever leave. There's also scruffy woods on the east side, where they can retreat and bed down.