A massive murder of crows

"The dusky bird is a notorious mischief-maker, but he is not quite so black as he has been painted" (William L. Dawson, 1903) 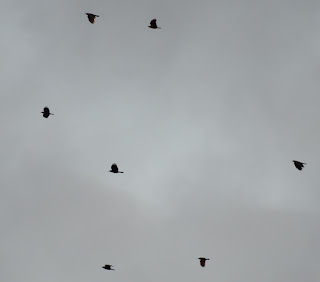 At the conclusion of a long day of birding in the remote hills of northern Jackson County yesterday, Heather, Nina and I found ourselves heading back north on route 35, not far south of the Ross County line. As twilight's gloom settled in, we glanced up to a distant ridge and saw some American Crows. Well, not just "some". Oodles, actually. "Stop! Turn around"! shouted your blogger, and we soon jagged off the highway onto a rural lane, and motored to a spot that offered a commanding view of the spectacle.

Crows have long had a big roost in this area. We were down there to participated in the Beaver Christmas Bird Count, and I've done nearly every count since its inception many years ago. On my yearly crack of dawn drives, I'd often see massive numbers of crows radiating out from their hilltop roosts on the high ridges just southeast of Chillicothe. This year, they've apparently relocated the party several miles to the south, and in our count circle. So, Nina, Heather and I watched the day's closure along with an estimated 6,000 crows, although we weren't nearly as loud.


Here's a brief video of a small portion of the roost. It can be really hard to pinpoint exact numbers of birds in roosts such as this, but 6,000 was our best shot and it may well be low. The din created by this pack of birds was impressive. Seemingly every one of them had a report to give on the day's activities, and the birds even drowned out the drone of the eighteen-wheelers passing by on the interstate.

Crows are highly social, and large winter roosts are a regular occurrence. Although 6,000 birds seems like a lot, it pales in comparison to some of the larger Ohio roosts. Long-lasting roosts in Springfield, Cambridge, and other Ohio locales have hosted 25,000 or more crows.

I imagine the spectacle of thousands of loudly cackling, cawing crows streaming in and bedecking the trees is a bit unnerving to some of the citizenry. To me, the birds are totally impressive and a thing of beauty. And just to be clear, a "murder" of crows is just an odd term for an assemblage of these wily mischief-makers.
at December 18, 2011

The Springfield roost was estimated for the Clark Co CBC at 30,000 again. It's a spectacle for sure. Glad I haven't heard talk of putting out poisoned corn in local fields to "reduce the levels" lately. There have been a few years where that was floated, supposedly because of impacts to crops. They congregate in those numbers in Springfield after harvest most years, and just eat the waste grain.
Brian

Big group like this in Mahoning county along 680 near RT 224, around dusk they start gathering to roost for the night on either side of the highway

This was a new and awesome experience for me, and I'm glad to have witnessed it first-hand. Brian, if you happen to be monitoring comments on this post, where in Springfield is the crow roost? I grew up there, but didn't sprout my birding wings until I moved to southeast Ohio, so I'm unfamiliar with the roost locale. Thanks in advance. -Heather

Heather, The Springfield crows move around a little, but most evenings they gather in the big trees along the Buck Creek Corridor in Snyder Park/Cliff Park/Veterans Park. Often as they disperse in the morning you will see mobs of them in trees near Water St. and Columbia St. up to Main near Schuler's Bakery (BEST donuts ever),and the trees along the ridge below High Street. As the sun goes down, they come in from the surrounding areas, and you can see a river of them flowing in from all the way to the horizon
Brian

Brian, thanks for that info. I know where you're talking about. And yes, I remember Schuler's donuts very well! Thanks again! -Heather
(And thanks for letting us hijack your comments, Jim!)

Great post and video, I love crows too! I drove to Springfield to observe the roost and was happy I did. Great show! Does anyone have other locations for some top notch crow viewing?