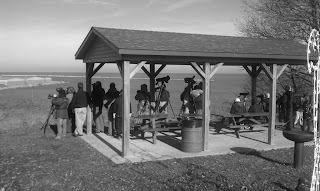 The scene at Ashtabula's Lakeshore Park yesterday morning. Peter King and I headed up to Lake Erie bright and early yesterday, to bask in the aura of Ohio's first state record Black-tailed Gull, and look for other rarities. I should have snapped this photo earlier. When we arrived, there were so many birders that I couldn't even slot my scope into a favorable position. I took this shot shortly after the gull made an appearance and rewarded everyone with excellent looks. Much of the crowd then moved on.

All of us who are interested in rare birds owe a debt of gratitude to Craig Holt, who found the Black-tailed Gull back on November 16th. Since then, hundreds of people have seen this beautiful bird, and I'd bet it was a life bird - not just a state bird - for nearly all of them. Craig's find has made its way into the media numerous times, including the first (HERE) and second (HERE) largest circulation Ohio papers, and of course the Ashtabula Star Beacon. All of this attention has surely piqued nonbirders' curiosity about birds, and that can only be a good thing.

Major thanks also go to Jen Brumfield, who has diligently kept the birding community aware of the Black-tailed Gull's every movement. The bird blinks, Jen reports it :-) She even created a mapping system of the Ashtabula lakefront to help people better navigate to the best viewing spots. Also, props to Jerry Talkington, who is a lakefront legend and an extraordinary birder, who has been a major asset to birders on the scene. Jerry is great about helping everyone find the gull, and other interesting birds in the area. 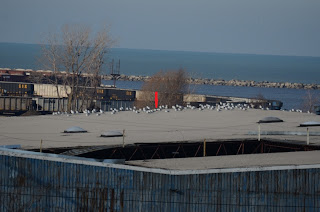 That litter of gulls on yon distant roof hosts the Black-tailed Gull, trust me. The elongate red arrow points directly down at the bird. The range was too much for my camera, but through scopes and binoculars we were treated to outstanding views. There was also a Snowy Owl sitting on the distant breakwall, and two first-cycle Glaucous Gulls were cavorting in the surf just beyond. One later wandered over and landed on the red arrow roof. A Peregrine Falcon also spent quality time basking on a limestone chunk on the breakwall, and Jerry Talkington spotted a Red-throated Loon whipping by low over the lake. To top it off, someone found a Purple Sandpiper nearby, on another distant breakwall. The latter was a LONG ways off, but certainly recognizable. But it surely would have been nice to see this latter Ohio rarity a bit closer... 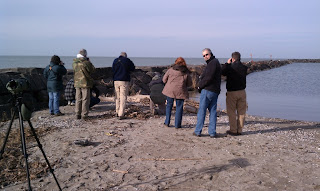 After savoring Ashtabula's avifauna, Peter and I headed over to nearby Conneaut Harbor, and headed out to the sands of the impoundment. Upon arrival, we saw this curious little knot of birders, seemingly looking at their feet. Aha! I knew this weird behavior could pretty much mean but one thing! 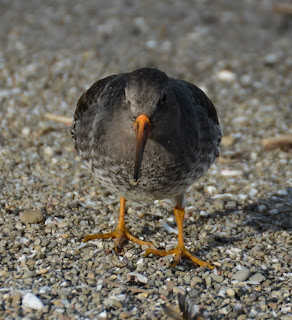 Purple Sandpiper! This species is extraordinarily tame, and I have absolutely no doubt that if someone lay down on the beach and didn't move a muscle, the bird would have just clambered right up and over them. At times, this purple piper bumbled to within ten feet of our group, seldom even casting a glance in our direction. Far more satisfactory views than the distant Ashtabula bird offered!

Note the extraordinary rotundness of the bird. I imagine a healthy Purple Sandpiper is a little blubber cart, the insulating fat helping it to deal with the frigid temperatures and hostile climates that these small beasts must endure. 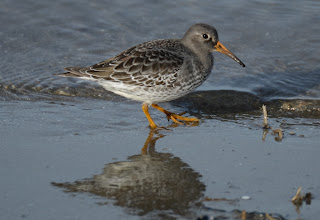 We see only a relative handful of Purple Sandpipers in Ohio, and nearly all occur along Lake Erie in early winter. This has been a lean year, with only two or three reports. If one is expecting a neon-purple bird ala Barney the Dinosaur, they'll be mildly disappointed. Purple Sandpipers are a beautiful shade of smooth slate on the breast and head, and the tone is quite stunning in good light. Seen very well, a purplish sheen glints from the back feathers. The bright yellowish-orange bill base and feet and legs create a faintly jarring contrast to the soft tones of the plumage.

Map courtesy Cornell Lab of Ornithology
Make no mistake, these Purple Sandpipers are tough customers. They breed in the highest reaches of the Arctic, some 1,800 miles or more north of Conneaut, Ohio. Unlike many of their long-billed shorebird brethren, the purples don't peregrinate to the balmy climes of the southern U.S., the Caribbean, or Central or South America. These plump little toughs ride out the winter in the northern Atlantic maritime region along with Common Eiders and Harlequin Ducks. Chances are this Conneaut bird will soon end up in a place like Barnegat Light, New Jersey. 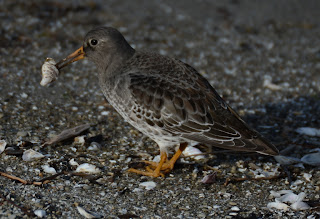 I was a bit disappointed at the greeting we gave this purple. It was foraging in a rack of non-native zebra mussel shells, intermixed with the washed up rhizomes of invasive giant reed plants, Phragmites australis. Yet the bird appeared happy as a, well, clam and eagerly rooted about the shells like a feathered piglet. I can't imagine the remnants of long-dead zebra mussels pried from their shells is all that appetizing, but apparently the purples are not picky eaters. 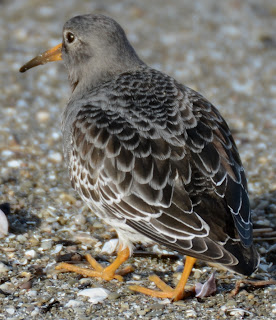 A well seen Purple Sandpiper is an objet d' art; a study in beautiful intricacies of color and pattern. The broad frosty tips to this bird's wing and back feathers mark it as a juvenile, meaning this individual was probably born in June. In a miracle of genetic coding, first-year Arctic-nesting sandpipers make the long journey south to their wintering grounds without guidance from older birds. The adults normally depart the Arctic well before the crop of juveniles. 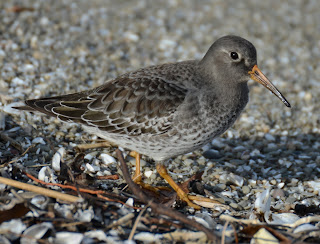 This Purple Sandpiper has survived long odds to make it this far. A great many shorebirds never make it beyond the egg stage, as nests are plundered in great numbers by predators such as Arctic foxes. If they do make it to hatching, young sandpipers are precocial, meaning that they can run about and begin feeding themselves within hours. At this stage, they become exceptionally vulnerable to aerial threats such as jaegers. But if all goes well, we see the stunning results of the parent's labors, as above. 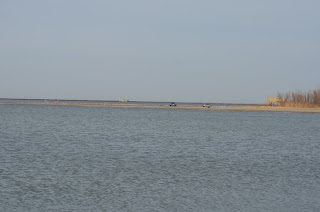 Conneaut Harbor. This protected Lake Erie impoundment is a major port of call for an enormous number and diversity of migrant shorebirds. The harbor also serves scores of ships, which ply the waters of the Great Lakes and far beyond. However, the nautical journeys of vessels stopping at Conneaut pale in comparison to the global wanderings of the sandpipers and plovers that stop here to rest and refuel. At least 33 species have been found at Conneaut, and collectively they will continue on to wintering grounds throughout the Americas. Some will travel as far as southern South America, the other end of the globe.

Click on the photo, and you'll see the new framework of an observation tower that the city is erecting. Conneaut's leaders know that the harbor is a big draw for birders and nature enthusiasts, and they are taking steps to accommodate people with such interests. But in this same photo, you'll see a pickup truck. Were you there, you couldn't have missed it as the idiot behind the wheel spun high speed donuts through the sand, scattering all of the gulls and other birds and disrupting everyone who was on the flats for legitimate purposes. Such motorized mayhem is quite common here. Not exactly the sort of thing that one wants to observe from the new lookout tower.

It would be great if the port authority would close off the sand flats to motorized vehicles, and permit birds and people their peace.


I'll leave you with a short video of the Purple Sandpiper putting on a show for its admirers.
at December 04, 2011

Purple Sandpipers are an annual winter visitor to the NE Coast of Florida, something your map doesn't show.