I was pleased to recently receive a raft of wonderful photos, courtesy photographer Chuck Slusarczyk of Cleveland. His stunning images of a Pomarine Jaeger, Stercorarius pomarinus, bear sharing and Chuck was good enough to allow me permission to post them here. 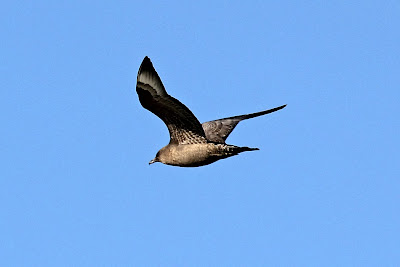 Photo: Chuck Slusarczyk
A beautiful, fierce subadult Pomarine Jaeger wings by Wendy Park near downtown Cleveland. This bird has been hanging out in this area for a while. In general, jaegers are rare in Ohio and nearly all records come from Lake Erie. Most birds are in rapid transit in fall and early winter, and probably quickly move west to east down the lake and remain out of sight to land-bound observers. Occasionally a "Pom" finds a desirable locale, and sticks around, like this bird is doing. 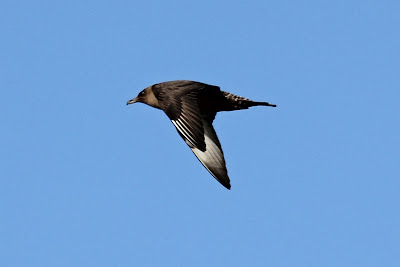 Photo: Chuck Slusarczyk
Immature jaegers can be tough to ID, and this is a group where lots of comparative experience with the three species is very helpful (Great and South Polar Skua are also in genus Stercorarius, but they are very different beasts, and strictly marine. About zero chance for either in Ohio). Long-tailed Jaeger, Stercorarius longicaudus, is by far the rarest of the lot in Ohio. Long-taileds are the smallest, lightest and consequently most bouyant of the jaegers. One weighs less than half that of the much sturdier Pomarine. They appear ternlike in flight, especially when compared to the burly purposeful flight of a Pom. Perhaps one Long-tailed is reported every year or two in Ohio, and they're early birds - usually seen in September or October.

SIDEBAR: I've said this before and I'll say it again. One of the great, simple innovations of the landmark 2000 Sibley Guide to Birds is David's inclusion of weight for each species. I suppose other guides omit that vital statistic under the premise that one can't see weight. Not true - the weight of the bird can effect its overall look and flight characteristics, especially in comparison with similar species.

Separating Pomarine Jaeger from Parasitic Jaeger, S. parasiticus, is often problematic. The two are fairly close in size, although if we go back to the Sibley weight reports, an average Parasitic weighs about 1/3rd less than a Pomarine. In comparison with the ever present Ring-billed Gull, a Parasitic should appear slightly smaller, while the more massive Pomarine will appear larger. Pomarines also show a nice "double flash" of white at the base of the underside of the primary flight feathers, as Chuck's first photo beautifully illustrates. A Parasitic normally has a single broad band of white. 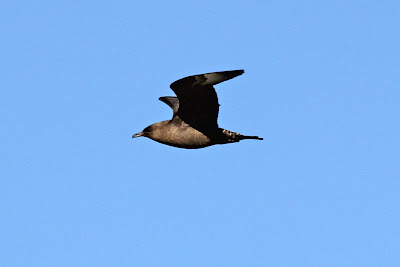 Photo: Chuck Slusarczyk
All of the identification issues aside, jaegers are just VERY COOL BIRDS. Jaeger is an English spelling of the German word Jager, which means "hunter". It's an apt moniker for these warlike birds that make their living by pursuing gulls and terns that have caught prey, and harassing them until the legitmate earner of the fish is forced to drop its prey, which is then quickly snatched up by the jaeger. Such bullying behavior is termed kleptoparasitism. No one likes a bully, and the gulls seemingly detest the presence of a jaeger. When a jaeger enters the scene, it often causes an electric ripple of palpable tension among the gulls, who will often rise in mass. Observing a jaeger single out a gull and acrobatically pursue it until the bird disgorges its fish is a thing of beauty, no matter what one thinks of avian bullies.
Jaegers nest in the high reaches of the Arctic tundra, and there they subdue their thuggish instincts somewhat and become highly dependent upon a small mammal, the brown lemming. So wedded are breeding Pomarine Jaegers to these furry little sausages that their breeding success correlates closely with lemming population booms and busts. In fact, Poms will actually locate lemming burrows and dig the little beasts out! But once a hood, always a hood, and they also grab eggs and nestling birds.
The vast majority of jaegers are pelagic in winter, spending the season far out at sea. Thus, a wintertime Pomarine Jaeger on Ohio's freshwater "sea", Lake Erie, is always a treat. Thanks to Chuck for sharing his excellent photos.
at December 28, 2011