I get lots of calls about this or that; often from people wondering about some odd animal or plant. In the vast majority of cases, their "mystery" organism is something common, at least to me. But I'm always glad to try and help, and what's common to me may not be to others. Anyway, a few days ago I received a call from a lady who started out by saying "I'm worried about my hummingbird..."! Whoa! My ears pricked up like a jackrabbit, knowing that the bird was likely a Rufous Hummingbird, with a remote possibility of some other western species. Our only breeding species, the Ruby-throated Hummingbird, should be long gome by now and hummingbirds seen after mid-October should be closely scrutinized.
Following is a pictorial story of this hummingbird, which is frequenting a feeder near Marysville, Ohio. 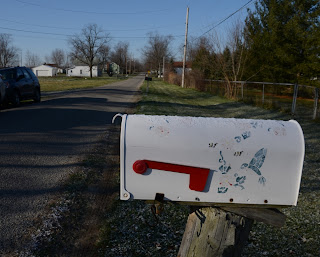 I knew I was in the right place when I wheeled up to the house and saw a hummingbird stenciled on the mailbox. The homeowners are crazy about birds, especially hummingbirds, so it is especially fitting that this little rarity chose ther home to fixate on. 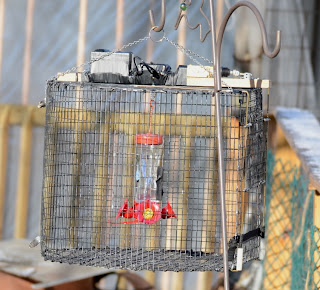 Today was the first day I could get to the site, but Tim Daniel, photographer for the Ohio Division of Wildlife, was able to get there two days ago and make some stunning images. From those, I knew it was a hummingbird in the genus Selasphorus - either a Rufous Hummingbird or an Allen's Hummingbird. Separating females and immature birds in the field is very tough, and our bird fit into this category. I got on the horn with expert hummingbird bander Allen Chartier of Michigan immediately after seeing Tim's images, and he was able to arrange to visit the site this morning. Capturing the bird not only reveals its identity for certain, it allows for the bird to be banded and other useful data points to be collected.

In the photo above is Allen's specially designed capture cage. The wire enclosure is hung in the same spot as the feeder that the bird visits, and the feeder then hung inside the cage. The open door is on the right side. Normally this contraption doesn't deter the hummer at all, and it'll shoot right up, circle the cage until it spots the opening, and dart right in. 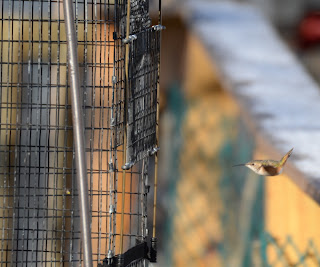 Aha! About three minutes after Allen set the rig in place, our hummingbird shot onto the scene. I managed to capture this image a split second before the bird flew through the open trapdoor. That's right - trapdoor. Allen was lurking nearby with a remote trigger, and as soon as the hummingbird was in the cage and drinking from the feeder, he triggered the remote which drops that trapdoor. And we had our hummer. 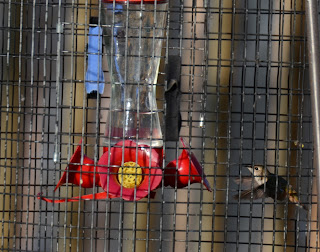 You'd think placing a large cagelike structure around the feeder might raise a red flag for the hummingbird, and cause it to stay away. Not so, and it usually doesn't even slow them down. As you can see, our hummer is now within the confines of the trap. 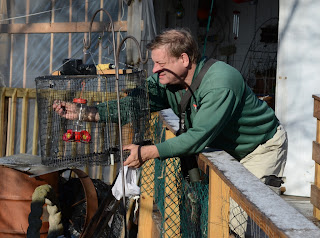 Here comes the tricky part - extracting the elfin bird safely and without incident. I've been on numerous hummingbird bandings with Chartier, and am always impressed with how quickly he can gently remove them. Experience counts, and Allen has caught scores of hummingbirds over the last decade. He is one of very few licensed hummingbird banders in this region, and we're lucky to have access to him as a resource in Ohio. 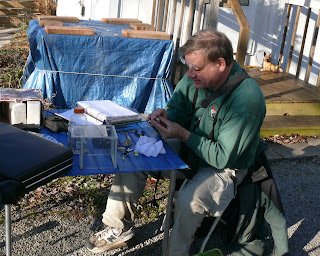 Once the bird is in hand, it's off to the makeshift lab which has already been set up nearby. Allen first places an impossibly tiny little metal band around one of the hummer's legs, then quickly gathers other information such as weight, fat content, bill characteristics, tail features, etc. Banders keep a keen eye on the bird's behavior, watching for signs of stress, and even keep a supply of sugar water at hand. Sometimes its good to allow the bird to lap up some of the liquid during the data collecting operation, just to ensure the bird keeps its metabolism at full rev. 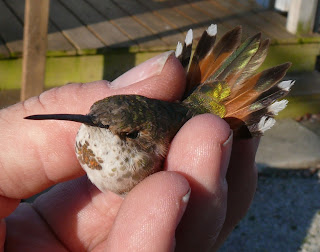 Here's the little beauty, up close and personal. By now we know it is an adult female Rufous Hummingbird, Selasphorus rufus, with a weight of 3.65 grams. For comparison, a new copper penny weighs 3.11 grams. In order to separate immature/female Rufous and Allen's hummingbirds, S. sasin, one must be able to carefully inspect the tail feathers, or retrices. That isn't easy to do on a hyperactive free-flying hummingbird. But in the hand, there is no problem and the characteristic features of a Rufous are obvious in this photo. The tail feathers - each is a rectrix; plural, retrices - are numbered from inner to outer. On a Rufous, retrix 2 is slightly notched, but is entire or unnotched in Allen's. Retrix 5, closer to the outer edge of the tail, is broader than the almost needlike narrow R5 of an Allen's. 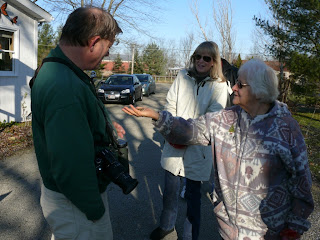 When it was time to liberate the hummingbird, Allen carefully placed it in the homeowner's hand. 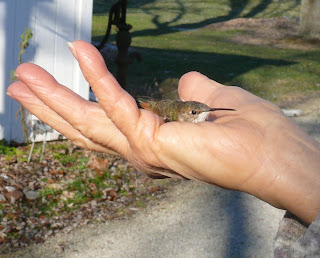 Sometimes the newly freed hummer will instantly dart off; other times, such as in this case, it'll just sit there for a bit looking around. After nearly a minute, little Ms. Rufous suddenly blasted off as if shot from a cannon. She roared by within inches of your blogger's ear, uttering squeaky little profanities all the while. But as always, I am prepared to put my life on the line and deal with dangerous beasts such as this hummingbird to bring you the story. 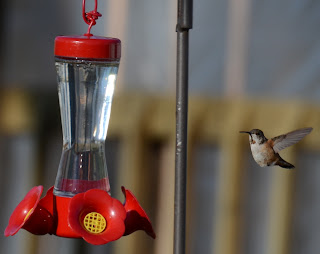 Within minutes, the Rufous Hummingbird was back at the feeder as if nothing had happened.

Ohio's first Rufous Hummingbird dates to 1985, and we've had something like 70 records since. This species' breeding range is from Oregon and Idaho north through western Canada and as far north as Anchorage, Alaska. They are exceedingly tough little birds, and quite able to deal with cold temperatures. It dipped to the high teens here last night, and it was 22 degrees when Allen caught the bird.

Banding has revealed that some of these seemingly wayward western hummingbirds will return to the same eastern locale for one or even more years. As the ones that appear at our latitude don't overwinter - this bird will probably leave before long - they obviously head to warmer climes whether it is the Gulf Coast, or the typical wintering grounds of western Mexico. Presumably they then head north to the breeding range for the summer.

The reasons for the upward surge in western and southern hummingbird species well east and north of their normal ranges is unsettled, but there are some likely explanations. That's another post however, but I'll try to put up some theories on this topic later.
at December 10, 2011

We had one in Southeastern Massachusetts see http://photobee1.blogspot.com/2011/11/rufous-hummingbird-in-wareham.html

Rufous Hummingbird migration patterns are crazy and unexpected. I animated some eBird sightings maps for my own amusement and was shocked at what I discovered. I don't know of any other species with migration patterns like these cute little hummers.

Awesome. And how sweet that the homeowner was able to hold this little gem.

Thanks for the info about the MA bird, Photo Bee! And great series of maps, Robert! Yes, she was thrilled to hold that hummer, Marianne. She said she couldn't even feel its weight, but COULD feel its little heart thumping away!

A major part of maintaining a bird cage cleaners and cage area is prevention of the mess in the first place. There are many barriers available to put around the bottom bars of the cage. Using these guards save many hours of cleaning because they cut the mess. There are a number of specialty products to put around the cage, but there are also ways to carry out the job without spending a lot of money.