Blast from the past: Ocellated Turkey

I was delighted to pick up my new issue of Winging It today, and see an article by Ohio's own Ashli Gorbet plastered across the front page. Winging It is the newsletter - "official!" - of the American Birding Association and as such, is probably the largest circulation birding info-sheet in the Americas.
Ashli, who was hatched in Westlake, Ohio, now hails from Albuquerque, New Mexico where she is secretary of the New Mexico Ornithological Society and works with the Rio Grande Bird Research, Inc. She's smitten with the tropics, and her Winging It article was all about birding in the tiny country of Belize, the northernmost Central American country. Belize is little more than 1/5th the size of Ohio, and its population is only 1/3rd that of my city, Columbus - about 330,000 people, the lowest population density of any Central American country.
A visit to Belize is high on my list, and I hope to finally make it there next year. Ashli's article mentioned some of the fabulous birds that can be found in exotic Belizean haunts, such as White-collared Manakin, Black-headed Trogon, and Keel-billed Toucan. Those birds are old friends from other tropical excursions, but I'd like to see them again, in addition to other possibilities that I haven't seen. 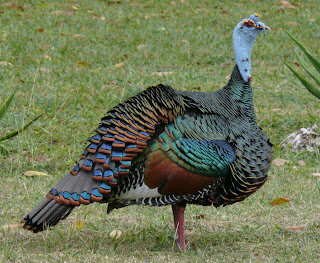 One of the species that Ashli mentions is this splendid glittering chunk of a beast, the Ocellated Turkey, Meleagris ocellata. I took this photo in 2010, in the country just to Belize's south, Guatemala. This is the other turkey; one of only two species in the genus Meleagris. Its sibling species is, of course, the Wild Turkey, M. gallopavo, which is so familiar to North American gringos. Ocellated Turkeys have a far more limited distribution, being found only on Mexico's Yucatan Peninsula and its immediate environs.


Here is a short video of a tom Ocellated Turkey "singing" as it pulls out all the stops to impress the hens at Tikal in Guatemala. It impressed your blogger.

In addition to Belize, another Central American trip you may find of interest is the Ohio Ornithological Society's upcoming expedition to Guatemala, March 4th thru 13th, 2012. You'll see the gaudy Ocellated Turkey and much more. All of the details are RIGHT HERE.

Congrats to Ashli on a fine article, and I'm sure I'm not the only one she's inspired to jet south to Belize.
at December 15, 2011

I also saw my lifer Ocellated Turkey at Tikal in 1993. After birding all over Belize, we drove the 40-mile "road from hell" from San Ignacio on the western Belizean border to Tikal in Guatemala. At that time, there was still a border dispute between the two countries so it was a bit unnerving to cross the border driving. Seeing Ocellated Turkey among the ancient Mayan ruins of Tikal was surreal as I'm sure you will agree Jim, since you have been there. Go to Belize, You won't regret it but much has changed in that country since I was there in 1993.