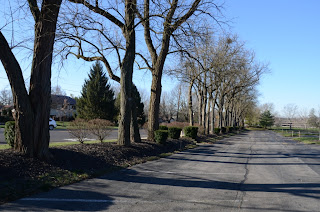 I have known this gnarled line of sentinels ever since I was a little kid, and old enough to range a mile away from the familial homestead. They're osage-orange trees, Maclura pomifera, and to me they exude a certain twisted charm. When I was just a lad, these trees stood tall, buffering one of Worthington, Ohio's main arteries. I've always harbored a niggling fear that the neighboring office complex maintenance staff would one day hack them down, disgusted with the trees' annual dump of large pulpy fruit.

But apparently others in the area have succumbed to the charm of the "hedge-apple", and so they remain. 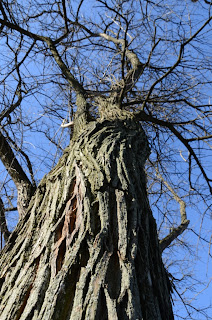 As osage-orange trees go, these are titans. The state champ - biggest known specimen in Ohio - is a Coshocton County resident, and it stretches 60 feet skyward. These trees aren't all that far behind. Our line of trees was planted many decades ago, back when neighboring Wilson Bridge Road was just a rural lane. Now, the amoebic ever-expanding suburban sprawl has long eaten the farm fields that these windbreak trees once sheltered. Many of my boyhood wildlands have been consumed by pavement, homes, offices, and box stores, but somehow these tough-wooded trees have survived the axe. 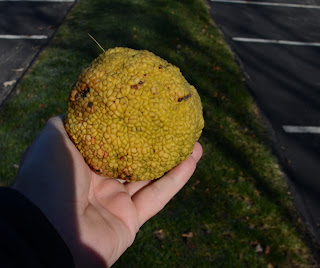 The brains of the tree - in botanicospeak, an aggregation of fleshy drupes. We'll call it a fruit :-) These hedge-apples resemble the lobes of a brain, with the tightly packed drupes forming  a random squiggly mass. One of these things weighs a lot, too, and I can tell you that osage-orange fruit make formidable projectiles when opposing gangs of young boys dispatch them against the opposition. 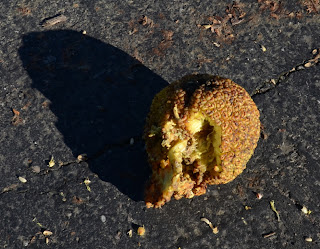 For the most part, animals shun the pulpy hedge-apples, probably in part because they are well-saturated with a foul whitish latex somewhat like the goo found in milkweed plants. But some animals go for them. When I wheeled into the neighboring office complex's back lot, which was strewn with fruit, I surprised two gray squirrels which were industriously tearing the hedge-apples apart. 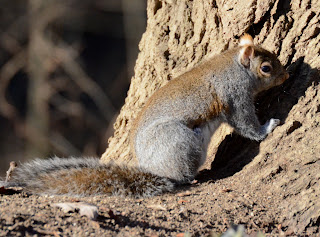 Apparently squirrels find it worth their while to do battle with the gummy pulp in order to get at the (presumably) tasty seeds buried within. Thus, squirrels may be agents of dispersal for this tree, but they probably aren't the animals that co-evolved with osage-oranges and once acted as the prime transporter of its seeds. This is the boot-shaped native range of osage-orange - just a limited portion of Texas, and a wee nip of Arkansas and Oklahoma. All the trees that one sees out of this area were brought there by people. A theory has it that now extinct large mammals, possibly giant ground sloths and other large Pleistocene mammals, were the primary consumers of osage-orange fruit. These animals went extinct not long after the first humans colonized North America, and thus the tree's spread was sharply arrested. That's a cool hypothesis.

One animal that still does use the tree heavily are Loggerhead Shrikes. Ones study of nesting shrikes not far from the native range of osage-orange found that nearly 70% of the 57 located nests were nestled within the dense gnarly boughs of Maclura pomifera. Such a tree is an Eden for the "butcherbird". The thick branching provides wonderful cover and support, and the thorny twigs offer plenty of spears on which these feathered impalers can skewer their victims.
at December 13, 2011

Love these trees. One of my favorites.

cool post, Jim. Our family farm has a patch of old-growth woods and mixed in from the old hedge rows are some monstrous examples of osage-oranges. my father is quite the woodsmith and is always on the look out for a good piece of osage to make his homemade bows with. a straight, non-twisting or knotted piece is almost impossible to come by!

FYI, you can play soccer with hedge-apples in the hallway of your college dormitory. They make great kick balls. It's a lot of fun, until the custodial staff finds them, that is. Then you are on your own. I take no responsibility for what might follow.

Wood from the Osage is a beautiful color. My husband turned a small bowl from it. It was a bright yellow at first. As it aged, it began to turn more of a yellow-orange, and now has an ochre patina.

Thanks for your comments, all! Good to see there are other fans of the hedge-apple!

We have a couple of stretches of them at our field station, gradually being swallowed by the regenerating forest. I'm starting to replant them in memory of the settlers who used them as living fences.

I saw my first hedge apple just a few weeks ago at the Yuba River State Park in Nevada County, CA. I had never seen such a fruit, so took one home and then googled "green brain looking fruit"-- the answer came right up. Nice to read a bit of its history here.

Excellent keyword selection, Robin! Glad my blog was helpful in providing some hedge-apple info, too!

Neat story. Don't know the origin, but as kids we grew up calling the osage orange a part of a monkey's anatomy!

Osage oranges were planted as hedge rows in Central California and a few giant trees remain in some areas. In Yolo county these trees seem to be less afflicted with mistletoe than other trees along roadsides, which might have contributed to their longevity. Our family collects Osage oranges for Christmas display near the fire. Don't know the source of this tradition.

A friend of mine saw these green brains for sale at a craft show/farmers market, for the price of $2.00 each. Apparently they're being sold as a natural insecticide.

In my childhood neighborhood we had crabapple wars. I'm sure glad there wasn't any osage-orange trees around. The boys could have killed us girls. DD

The hedge apples are apparently great repellers of insects, notably cockroaches. They used them with success in a kitchen used by grad students (at Blandy Experimental Farm in VA) after trying everything else. The roaches left. I put several in my car every fall to annoy the little guys that hitchhike on the plants I deliver to clients. Makes life easy!