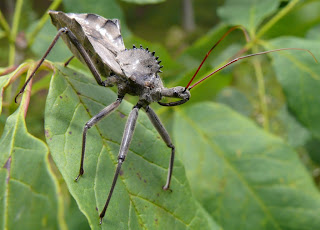 A wheel bug, Arilus cristatus, in repose. These beneficial native assassin bugs are ten kinds of cool, squared. I always consider it a treat to encounter one, and have shown many people their "life" wheel bug. Invariably, they are impressed. Of course, I would explain the valuable roles that they play in nature, and the incredible mechanics of the beast. These prehistoric-looking insects truly are miniature works of art, and deserve our respect.

Thus, I was mortified when I encountered an alleged "news story" about the fearsome wheel bug. The reporter used bizarre inflammatory rhetoric to describe these small insects, such as "The horrific monster or insect..." I'm not kidding. As he spouted this sort of nonsense, he whipped up some local Pittsburgians into a frenzy of fear over the terrifying wheel bugs. It was as if an army of six-legged Vlad the Impalers had descended upon the bucolic Pennsylvania neighborhood.

WATCH THIS SILLY VIDEO HERE. Then, on behalf of wheel bugs everywhere, I would encourage you to leave a comment on their website that protests this ridiculous bit of "journalism", and stick in a good word for the bug!
at November 18, 2011

I've never seen a wheel bug, even though I'm always keeping an eye out out for them. (When I was working in Georgia, one of my coworkers who knew I was a "bug person" showed me a picture of weird insect she'd taken with her cell phone, asking if I knew what it was. It was a wheel bug. She didn't understand why I was so excited and so jealous!) They're incredibly cool, and why someone would make up sensationalist claptrap about a harmless and wonderful insect is beyond me.

Apparently they only accept comments if you have a facebook login. But I had a pretty good one, if someone wants to post it for me: "You make this sound like a zombie apocalypse, for pity's sake."

Don't you LOVE the reaction that's "honored" in this video: OOH, it looks WEIRD. Let's KILL it!!!

I found my first-ever wheel bug earlier this fall and was absolutely amazed and thrilled.

I am fascinated by insects and this is a truly cool one. Thanks for this post.

Just found one of these -sadly dead - on our deck this afternoon. Almost 40 years here in Ohio, and this is the first I've ever seen!