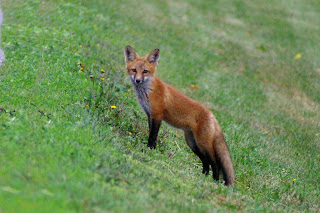 Photo: John Howard
Just about everyone loves red foxes, Vulpes vulpes. Well, maybe not everyone. Chicken farmers who are unsuccessful in defending the coop don't like foxes. Conservationists trying to protect certain species of birds and other small animals may take issue with the bushy-tailed beasts. And the folks who put together the International Union for Conservation of Nature's list of the top 100 species of worst invasive species put the red fox in the lineup.

The red fox is found far and wide; it is distributed more widely than any other animal in the Order Carnivora. They're now found in places where they weren't, historically. In fact, the line between native and non-native foxes in North America is very blurry. Some authorities believe that prior to European settlement, red foxes were found only in regions to the north and west of the once vast eastern deciduous forest, while the woodland-loving gray fox occupied the latter habitat. But as has happened elsewhere, people didn't waste any time introducing red foxes to parts of North America where they probably weren't, and the clever adaptive little mammals quickly ran wild.

But, unless a fox is caught making off with their kitten, puppy, or steak on the grill, most people just love red foxes. I wrote one of my Columbus Dispatch columns on the red fox back in March, HERE, and was fairly inundated with email from infatuated fox enthusiasts. 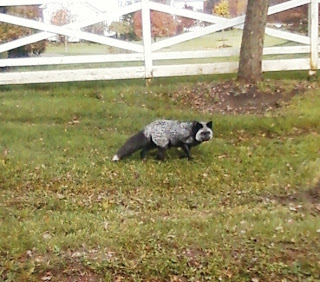 Photo: Daniel Redfern
But most fox hounds ain't seen nothin' like this! Dan Redfern of rural Geauga County, Ohio sent along some photos of a most amazing fox. I can see why someone would do a doubletake, lunge for the camera, then grab the field guides to sort this one out. 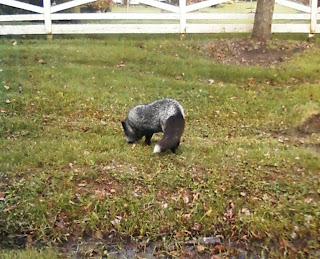 Photo: Daniel Redfern
Quite the handsome fellow, and that's saying something as "normal" red foxes aren't too shabby in the looks department. This is a "silver" red fox; a melanistic form that is apparently quite rare. At least I've never seen one, and I'm not sure I know anyone who has. While this form is selected for and bred on "fox farms", it does occur rarely but regularly in the wild. Chances are that all of this animal's litter mates were of the normal red color. 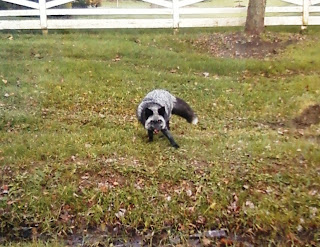 Photo: Daniel Redfern
Red fox can be quite variable in coloration, although at least in these parts the vast majority are reddish, just as the one in John Howard's beautiful photo at the top of this post. At least eight different consistent color forms have been described, but this silver form may deserve the tiara for winning the beauty contest. Apparently silver fox pelts were highly coveted by European nobility at one time, and an excellent skin was more valuable than 40 beaver pelts. John James Audubon said this of the silver form:

"In the richness and beauty of its splendid fur the Silver-gray Fox surpasses the beaver or sea otter, and the skins are indeed so highly esteemed that the finest command extraordinary prices, and are always in demand."

An extraordinary find indeed, and thanks to Dan Redfern for sharing his photos!
at November 02, 2011

What a beautiful guy. those black ears are something else.

I knew someone that had 2 of these color morph foxes as pets years ago(~20 years ago in Preble County).
They were purchased at the now somewhat infamous animal swap/sale/auction down near Lucasville. My first instinct on seeing these photos is that someone's fox escaped from its pen. Hopefully it's a wild fox whose wacky canid genes are showing how plastic they can be.
Brian

The silver fox is quite a strange-looking fella! With a thick silvery neck ruff & raven-black face & snout, it's lookin' more like a beaver ('cept the tail, that is) than a fox!