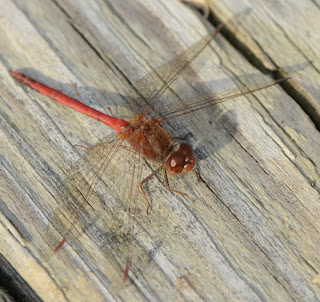 The last dragonflies to be on the wing, at least in appreciable numbers, are the meadowhawks. And of the eight Sympetrum meadowhawk species that have been found in Ohio, the one above is the hardiest of the lot. It is the autumn meadowhawk (formerly yellow-legged meadowhawk), Sympetrum vicinum. I made the photos above and below yesterday while on a lunchtime stroll around the grounds where my office is located. 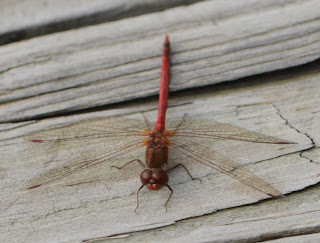 Male meadowhawks are striking animals. The cherry-red abdomen is a conspicuous feature, but these are small dragonflies and often dart away with such rapidity that an average hiker may not see them well enough to appreciate their fiery tones. Separating the various species can also constitute an issue of identification, especially with the females. Males are easier, and two of the features to look for on autumn meadowhawk is the blood-red face and the pale straw-colored legs.

It's routine to see autumn meadowhawks on the wing in November, and I've even seen them out and about on cool blustery days with temperatures in the 50's. Yesterday and today was nice, sunny, and in the 60's and the meadowhawks were quite active. 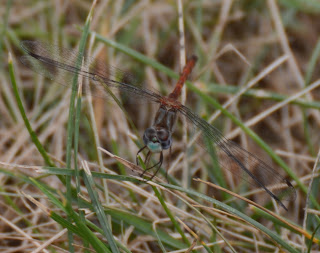 This meadowhawk is a much rarer insect than the species above, at least in these parts. Or at least I think  it is. It is a blue-faced meadowhawk, Sympetrum ambiguum, and this specimen was the first one that I had seen. I found it back on September 5th in Green Lawn Cemetery in Columbus. The animal was wary and hard to approach, and would only alight on the lawn, so it made for tough photos. Note its beautiful bluish-white face.

There is a small pond not far from where I observed this blue-faced meadowhawk, and perhaps they use it as breeding habitat. Or it could be that blue-faced meadowhawks wander as do some of the other dragonfly species, and this individual had come from some distance away. Green Lawn Cemetery is an oasis of greenery in a sea of heavily urbanized cityscape, and attracts large numbers of migrant birds and other flighted organisms.

Don't know what specific species, but I noticed a number of small red dragonflies on the wing when I was in central Wisconsin over the weekend. (Now, here in NORTHERN Wisconsin, I suspect we've had enough hard freezes by this point to take out even the hardiest dragonflies.)

Good chance they were also autumn meadowhawks, which I believe occur throughout WI.

I loved this post. We saw tons of dragonflies this year in Calgary and in Saskatchewan including Cherry-Faced Meadowhawks so I really enjoyed your photos. However we have snow now so I will have to wait for next year to resume dragonfly watching.

Thanks for the comment, Guy. I imagine it is about time to start building the igloos up there!