Cuckoos have come back from far southern climates 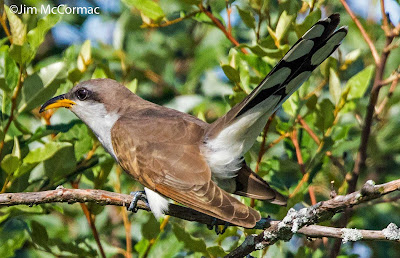 
…He was but as the cuckoo is in June, Heard, not regarded…
William Shakespeare (from Henry IV)

On a recent photographic foray to Glacier Ridge Metro Park, I had an amazing experience with one of our most enigmatic birds.

While in a meadow admiring bobolinks, I heard the loud junglelike call of a yellow-billed cuckoo. The bird was secreted within an isolated grove of trees. As I neared my quarry, it dropped from thick cover and headed across the meadow.

I issued my best cuckoo imitation, which caused the bird to pivot and return to the trees, giving me beautiful photo ops. In short order, it snapped off a twig and took it to a nesting site.

Yellow-billed cuckoos (and our other species, black-billed cuckoos) are far easier to hear than see. Although large — the size of a mourning dove — cuckoos typically remain concealed in dense leafy cover.

Cuckoos are late migrants, with many not arriving until early June. They have come a long way: Almost all spend the winter in South America.

One reason for the tardy return is their prey. Caterpillars, especially large ones, form cuckoos’ dietary staple. It’s best for the cuckoos to wait until the caterpillar crop matures before arriving to feast upon them.

To the caterpillar, having a cuckoo in the tree is akin to Freddy Krueger entering the house. Cuckoos are adept at locating caterpillars and making mincemeat of them. This is one of few birds that eat the hairy Eastern tent caterpillars that form silken nests in cherry trees. A ravenous cuckoo was documented downing 47 of these larvae in six minutes.

Cicadas are also a favored food. The emergence of periodical cicadas can stimulate localized booms in cuckoo populations. Much of eastern Ohio will experience a 17-year cicada emergence next year. There should be lots of cuckoos to exploit the bounty.

Cuckoos can become nest parasites. In addition to raising its own young, a female cuckoo might drop eggs in other birds’ nests. The unwitting surrogates then raise the cuckoos. Common hosts include catbirds, robins and wood thrushes.

It takes only 17 days for a cuckoo to go from egg to fledgling.

Naturalist Jim McCormac writes a column for The Dispatch the first and third Sundays of the month. He also writes about nature at www.jimmccormac.blogspot.com
at July 05, 2015

Another thought about these cuckoos. The park where we walk a lot had an outbreak of the 7-year?? cicada. The one with the red eyes. Anyway, they were thick and it seemed to us that there were more cuckoos around this summer. I wonder if they knew it was the year for these cicadas to emerge.??? Another wonder.

Thanks as always for your comments, Lisa. Cuckoos are well known to exploit cicada outbreaks, as well as tent caterpillar booms. They are quick to locate such food sources, and alert the troops, as it were.

I have noticed a significant increase in Cuckoo numbers near my home in Crawford County.