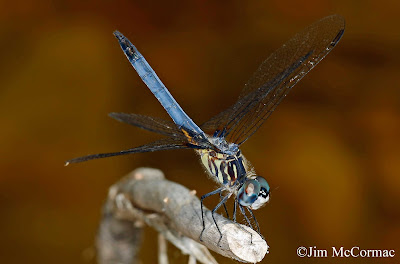 A Blue Dasher, Pachydiplax longipennis, poses for the camera. While casing out sites for Mothapalooza field trips a few weeks back, I came across a beautiful pond in the depths of Shawnee State Forest. Its marshy verges were filled with dragonflies, and my attention was diverted to shooting images of the spectacular beasts. Blue Dashers are often about the most common dragonfly in such habitats, but I never tire of shooting them. The animal in the photo is "obelisking" - pointing the tip of its abdomen towards the sun to minimize heat absorption. Sometimes, on very hot days with the sun overhead, they'll stick their abdomen up until nearly vertical.

While shooting the dragons, I noticed that several interesting birds were close at hand, including a singing Yellow-throated Warbler. Wanting photos, I switched camera gear over to the 500mm lens, and put the whole affair on the tripod. As I stalked the warbler, I began to hear a strange call from the small creek that fed the pond. Certain it was an amphibian, but unsure as to what species, I wandered over to find the singer. 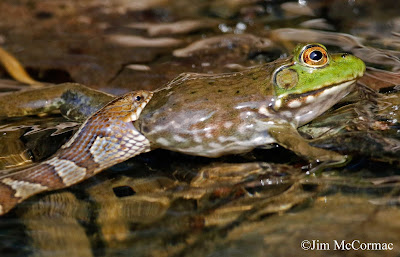 Well! Small wonder I didn't recognize the sound! A large Bullfrog had been seized by this Northern Watersnake, and was issuing soft plaintive bleats quite unlike its typical calls. I pivoted the big lens to this drama, and began snapping away. 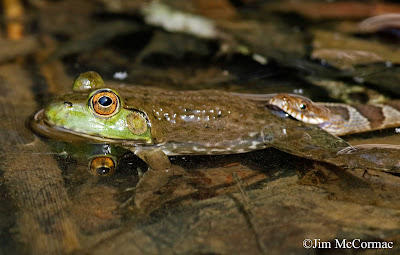 The snake seemed to have a firm grip on its prey, but the frog was large and powerful enough to occasionally drag the snake about as it tried to escape. After about ten minutes of this (I'm not one to interfere in such affairs), the frog appeared to be tiring. Birds forgotten, I was determined to photo-document this tale to its end, whatever that might be. Although some snakes, apparently including this species, can dislocate their jaw and thus open the mouth to incredible proportions, I didn't see how the snake would ever manage to swallow such a large prey.

I never got the chance to find out. Finally, the frog lunged forward in a mighty burst, and shook free of its tormentor. It was gone in the blink of an eye, leaving behind a presumably hungry and frustrated snake. NOTE: When we came back to this spot the next day on the formal field trip, this snake (I would suppose) was in the same spot, hiding under streamside vegetation. It occasionally thrust out into the clear waters and grabbed minnows, so fear not, it wasn't going hungry.

Here's a short video of the frog-snake encounter. Turn up your audio and you'll hear the curious bleating sound given by the seemingly doomed frog.
at July 07, 2015

This certainly isn't a noise that you would associate with a bullfrog. I bet he will be watching for that snake next time around that side of the pond.

You did the right thing man!!!