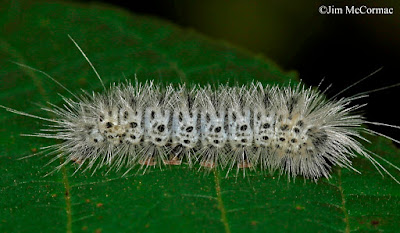 I interrupt the irregularly unscheduled programming of this blog to offer up a Public Service Announcement about a caterpillar that has been generating lots of questions and comments of late.

The fuzzy bag of goo in question is, as shown above, the caterpillar of the Hickory Tussock Moth (HTM), Lophocampa caryae. I've received more than a few queries about these hirsute white cats, and so have many others. Perhaps you've seen one or many yourself this summer. 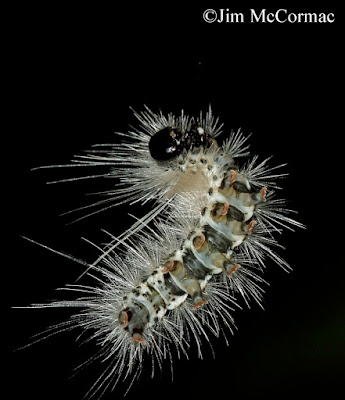 While the HTM caterpillars are often seen alone and on the march, they are sometimes found twisting in the breeze, suspended by a silken belay line suspended from the overarching foliage. This probably happens when some leaf-going threat startles the cat and it drops from the leaves, catching itself in midair with its strand of silk. Or perhaps it is just (literally) hanging out. Some caterpillars avoid potential predators amongst the leaves by whiling away the time dangling aloft.

When seen marching across the ground, seemingly with a purpose, the caterpillar is probably near ready to enter the pupa stage and is looking for a good spot to build and secrete its cocoon. HTMC's overwinter in their cocoon phase, hidden in leaf litter. 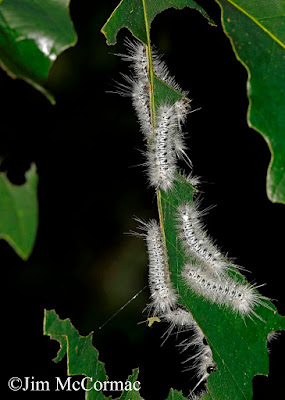 In their early instars (growth stages), HTM cats are conspicuously gregarious. As they mature, because they're feeding in close-knit quarters, the caterpillars can cause noticeable leaf damage. Even so, the defoliation is usually limited to a small section of whatever plant it is that they're feeding upon. I found the animals above last Sunday snacking on an oak, and even though the cats were plentiful, their damage was quite localized. 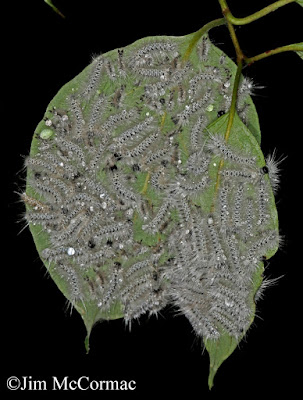 HTM cats are highly polyphagous - they can and will eat nearly any type of woody plant. Oaks and hickories seem to be preferred, though. It's common to find a resting group tightly packed together and nearly covering the entire lower surface of a leaf. The cats above, which I also found last Sunday, were on Flowering Dogwood, Cornus florida.

This species has distinct boom and bust years, and at least in central Ohio this is decidedly a boom year. Rare would be the trip afield, right about now, where a sharp-eyed observer would not see some HTM caterpillars. Nothing to be alarmed at, though, as they'll not do any lasting damage to the trees, at least insofar as I'm aware. But do be aware, sensitive people can receive a rather nettlelike rash from handling the caterpillars. The effects are normally mild and fade fairly quickly. A good rule of thumb with caterpillars is to NOT HANDLE them, especially hairy or spiny species. Many species, such as this one, are armed with stinging hairs as a predator deterrent. 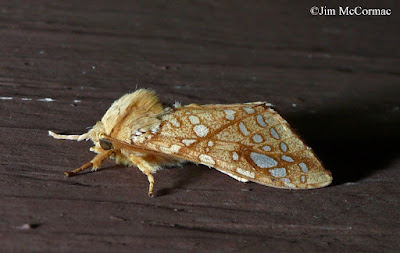 The mortality rate of HTM caterpillars is extreme, and only a tiny percentage of the crop will make it all the way through to the adult stage. Those that don't become food for legions of predators, thus playing a pivotal role in the vast and complex food web. The ones that do make it through the entire life cycle will become the beautiful animal above: a Hickory Tussock Moth.

I love the fascinating degree of detail in these photos!

Definitely a boom year for them in Dayton/Springfield area too. They are seemingly everywhere if you are in or near any woods.
Brian

Would you believe that I've co-authored a paper on these beasts??
http://www.ncbi.nlm.nih.gov/pubmed/20015715