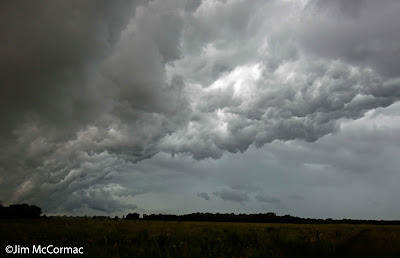 Ominous skies boil over the prairies of western Indiana. It didn't take a meteorologist to predict an imminent monsoon, and sure enough, the skies soon let loose.

I finally made a long overdue trip to Kankakee Sands in Newton County, Indiana, to see one of the Midwest's most notable prairie restoration projects. This site is only about an hour south of Chicago, and my friend and Chicagoan Joyce Pontius bopped down to join me, and we were to meet up with Mike Homoya and Roger Hedge of the Indiana Department of Natural Resources. Mike and Roger wisely decided to cancel, as they had a long drive and the day looked like a complete washout. 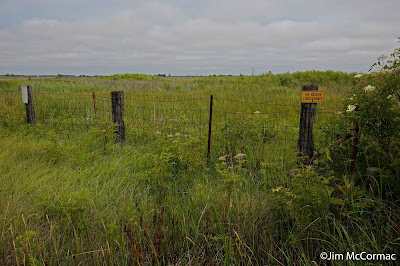 But as fate would have it, the weather soon cleared and conditions became fine for exploration. Warm weather and mostly clear skies were essential ingredients for finding my primary target. More on that in a minute.

This region once was covered by a marsh so vast it was known as the "Everglades of the North". Tens of thousands of acres of wetlands interspersed with prairie and oak savanna that attracted clouds of migratory birds and hosted scores of breeding animal species among a dizzying array of plant species. It didn't take long for people to begin plundering the bounty of Beaver Pond, as the area was also known. Eventually the agriculturists set about attempting to drain the vast wetland, and by 1930 they had largely succeeded.

In the late 1990's, The Nature Conservancy got a rare opportunity to purchase a big chunk of this area, and dubbed it Kankakee Sands. They and many partners now own and manage nearly 8,000 acres, with the long-term goal of interconnecting and restoring 20,000 acres of former prairie. 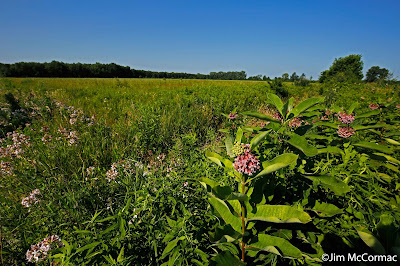 Massive prairie meadows await the visitor, and they are rich in biodiversity. Birders go crazy here. Henslow's Sparrows are everywhere, as are Dickcissels. Blue Grosbeaks are easily found, as are several dozen other breeding birds. Plant diversity is huge, and includes several prairie species that don't quite make it as far east as Ohio. Many are rare in Indiana; all told, about 130 state-listed plant and animal species occur at the Kankakee Sands. We were fortunate indeed to stumble into one of the harder to find rarities: the Western Slender Glass Lizard, Ophisaurus attenuatus. This bizarre reptile lacks legs and is incredibly snakelike. I got some nice photos, and if time permits I'll write about the glass lizard later. 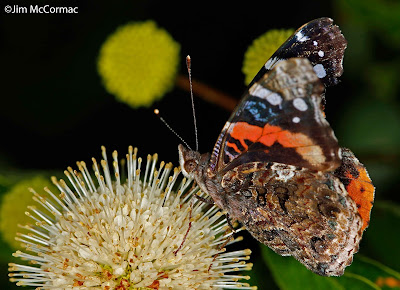 The primary objective was a gorgeous butterfly; everything else was gravy. As befits a huge prairie with lots of flowering plant diversity, there were butterflies everywhere. This is a Red Admiral, Vanessa atalanta, nectaring at the flowers of Buttonbush, Cephalanthus occidentalis. As you may have noticed, it's a boom year for them. 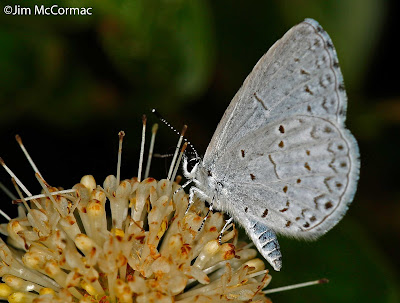 Summer Azures, Celastrina neglecta, were also everywhere. This one is also sipping from Buttonbush. This plant is a great native for the yardscape, especially if you like to draw in butterflies. 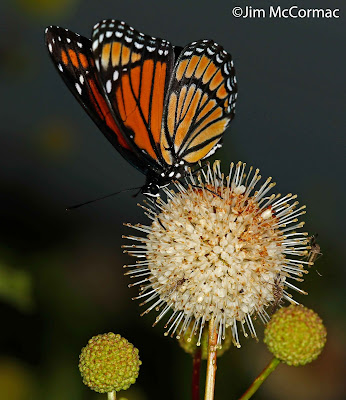 I don't recall ever seeing such a high density of Viceroys, Limenitis archippus. Wetlands and roadside ditches were full of various willows, which are primary host plants for this species. 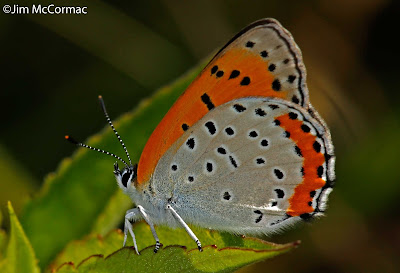 A bit scarcer and much harder to find than the aforementioned buttonbush-loving butterflies is this, the Bronzed Copper, Lycaena hyllus. While large for a copper, it is still a tiny butterfly and they tend to stay low in the vegetation of wet meadows. Finding a few was nice, but out target butterfly is far rarer than this. Yes! It didn't take long to find Kankakee Sands' most celebrated lepidopteran resident, the Regal Fritillary, Speyeria idalia. This is a big butterfly, near the size of the more familiar Great Spangled Fritillary, Speyeria cybele. Like the latter frit, Regals are extroverts and easily spotted. 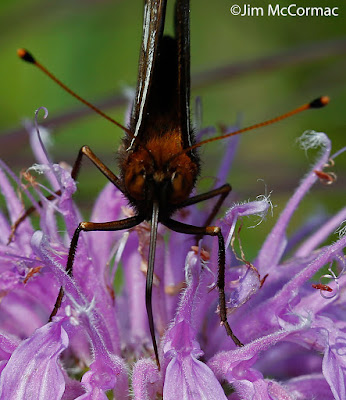 We didn't see many Regal Fritillaries, perhaps 4-5, but I'm sure a higher tally could have been achieved by ignoring all of the other cool fauna and flora, and focusing on butterflies. This one is tapping nectar from Wild Bergamot, Monarda fistulosa, a favored food plant. 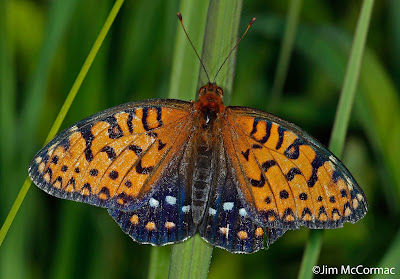 The Regal Fritillary has become a poster child for butterfly conservation, due to the species' alarming collapse. They used to occur in Ohio - many counties - but it has not seen for at least two decades, and is now considered extirpated. It's disappeared from perhaps 14 other states in its range, too. The Kankakee Sands population is the only one left in Indiana, I believe.

While no one knows exactly why the fritillary is disappearing, it's - like so many other declining rarities - probably a combination of factors. Death by a thousand cuts, sort of. Their host plants are various species of violets in the genus Viola, and those of course must be present. Viral infections have been implicated in diminishing isolated populations. In some areas, excessive use of pesticides may cause collateral damage to the fritillaries. Increased fragmentation of suitable prairie and meadow habitats has undoubtedly taken a toll - this is a species that seems to need large tracts of appropriate habitat. But the undeniable HUGE factor is outright loss of habitat. Over 99% of original Midwestern prairie has been lost, mainly to agriculture, but other types of development have also  eliminated prairie.

Hopefully, restoration of prairies such as at Kankakee Sands can stave off the demise of iconic species such as the Regal Fritillary, and many other prairie-dependent animals and plants.