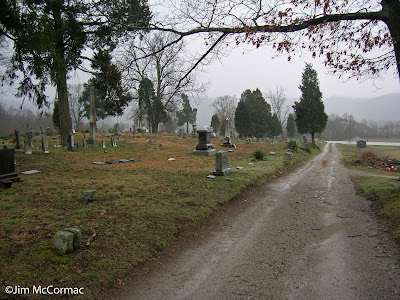 Yesterday, I engaged in a biodiversity-filled field trip to Adams County with three of my favorite people: Dave and Laura Hughes, and John Howard. Our main mission was to find unusual beetles, and that we did. More, perhaps, on that in a future posting (Don't hold your breath and turn red, though - I'm sitting on so much material I'll never get to it all). With this crew, I knew surprises would turn up, and they did.
We started the mission at Sandy Spring Cemetery and vicinity. This spot sits on a massive sand terrace of the Ohio River, and is fabled for rare flora and fauna. Those hills in the backdrop of the foggy photo (taken some time back) are in Kentucky; the mighty river lies between my camera's lens and those hills. 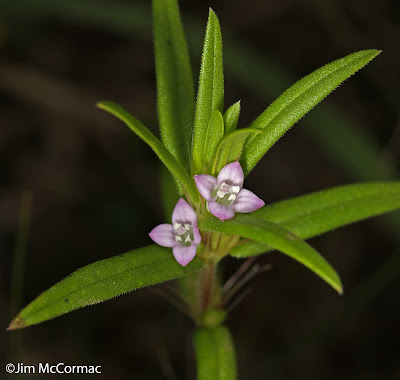 The elevated areas of the sand terrace are high, dry, and well-drained. The sands support an interesting community of xeric (dry-loving) plants, such as our only native cactus, prickly-pear, Opuntia humifusa. Far less conspicuous is rough buttonweed, Diodia teres. The plants stand but a few inches tall, and the tiny bluish-rose flowers hide in the leaf axils. Small as this plant may be, it grows in profusion and forms carpets over the sand in places. It may be a central figure in this story, too.

As we traipsed through sandy cactus-laden soils looking for velvet ants and whatever else, I was pleased to glance ahead and spot this magnificent caterpillar laying on the ground. We moved in, and quickly became baffled. None of us northerners could recall seeing anything like it, although we knew it was some sort of sphinx moth caterpillar.

This was no wee cat - the tubular beast was a few inches long, although it blended well with the sandy substrate. It, like most caterpillars, was also an eating machine. Note the fresh piles of frass - caterpillar scat - near its rear (left). I wonder if that frass might be the chewed remnants of the rough buttonweed depicted earlier. The buttonweed, or at least similar species in the same family, are known host plants for this species. 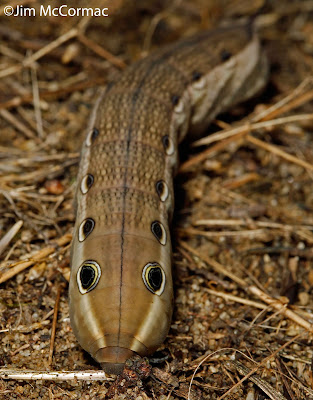 As caterpillars go, this was an intimidating one. Very much the snake mimic, apparently. When disturbed it would shake violently, furthering the intimidation factor. Such a ruse probably often works with would-be predators such as songbirds, and might even serve to shake away lethal parasitoid wasps and/or flies.

Anyway, it took little time to determine its identification once books were accessed: Tersa Sphinx, Xylophanes tersa. Small wonder none of us had seen one. This is a largely tropical moth, typically occurring from the southern U.S. south as far as Argentina. 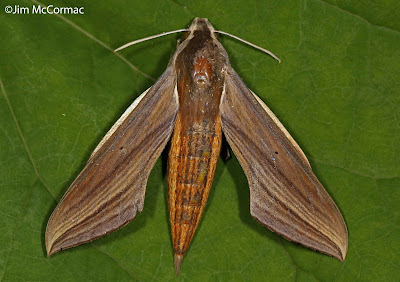 This is what the adult Tersa Sphinx looks like, and the animal in this photo is the only one that I've seen. It appeared a few years ago at John Howard's night lights at his Adams County house, and he was kind enough to bring it along on a field trip so that we could see it.

Tersa Sphinx moths are well known for their migrations, which can bring small numbers far north of the usual range. Very small numbers appear in Ohio most years, but I did not think they were known to reproduce here. Obviously, based on our caterpillar find, they at least attempt to. I posted a photo of the caterpillar on Facebook, which prompted a few interesting responses. Bob Placier reported seeing a caterpillar in Hocking County a few years ago. And Sherri Werdebaugh encountered a few caterpillars in NW Ohio several years ago, but had reason to believe that they might have been imported on nursery stock.

In the case of our find, I wouldn't think there'd be any question that a free-flying moth deposited the eggs that led to this caterpillar.

Winged insects are proving to be hyper-responders to warming mean annual temperatures, with an ever-increasing cast of southern butterflies and dragonflies leading the charge. Southern and even tropical species are appearing far to the north of their "normal" ranges with increased frequency, or so it would seem. One might predict that this beautiful sphinx moth will become a regular part of Ohio's Lepidoptera before long.
at July 06, 2015

Wonderful blog. Came upon this while researching the tersa sphinx. I found one at work today (Rocky Fork metro park) near new Albany. I think its awesome that you mentioned Bob Placier in this as I graduated from Hocking in May.