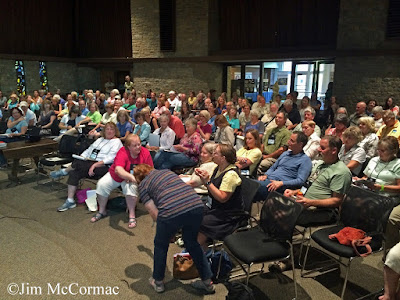 The crowd at last weekend's Midwest Native Plant Conference gathers for Friday night's keynote, Don Leopold. This was the 7th year for the conference; the 6th at Bergamo Center on the grounds of Mount St. John in Dayton, Ohio. It sells out every year, and this year it took only about 30 days after registration opened to fill all 175 slots.

We try to bring in the best speakers possible, and this year the cast was exceptional. They were: Kenn Kaufman, Don Leopold, John Magee, Michele Banker, Cheryl Harner, Erika Galentin, Jason Larson, Bethany Majeski, Hal Mann, Carol Mundy, Judith Nastally, Lisa Rainsong, Elisabeth Rothschild, and yours truly. A big thanks to all of the field trip leaders, and everyone else who had a role in the conference.

Huge thanks to all our sponsors as well. CLICK HERE for a listing. 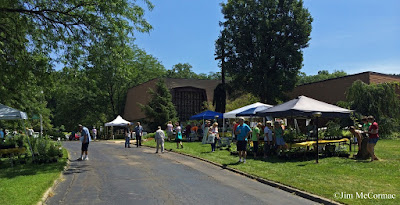 A big part of the conference are the vendors. We want everyone to go away with armfuls of native botanical magic to stick in the ground. This is vendor's alley, in front of the Bergamo Center. Between everyone that's there to sell, an enormous diversity of plant species can be had. I'm sure it is the greatest selection of native plant species assembled anywhere in the state, and you'd probably have to go for a fair bit beyond the state's borders to find anything comparable.

CLICK HERE for a list of this year's vendors, and get some good plants from one of 'em. 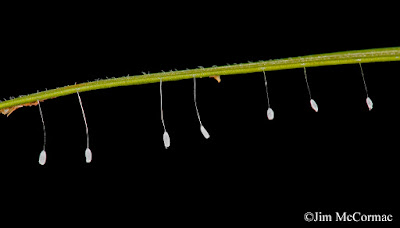 Strange and interesting things always seem to occur around the vendor's wares. Last year, a pair of mating Honey Locust Moths turned up on someone's potted Helianthus decapetalus sunflower that was for sale. This year, Jan Hunter of Naturally Native Nursery approached me with a small Cylindric Blazing-star, Liatris cylindracea, that was for sale. That was cool in its own right, as this little blazing-star is rare in the trade, and also rare in the wild on Ohio. But what was even cooler was the little strings hanging from a leaf, with tiny sacs hanging from each thread. They are the eggs of a Green Lacewing, an interesting predatory insect that likes to attack and eat aphids. 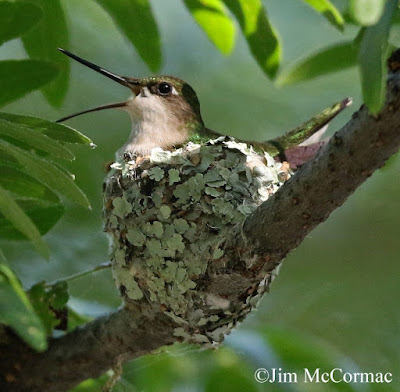 This little beauty stole the show, although she chose this moment to yawn at the photographer. Yvonne Cecil found a Ruby-throated Hummingbird's nest in a Honey Locust tree practically over the sidewalk in front of Bergamo Center. It was only about ten feet high, and easily seen. She was incubating eggs - an apparent second nesting - and as word spread, more people came to see her. The hummer cared not a whit, and despite all of the activity below, she diligently cared for her clutch. I bet well over a hundred people got to see their first hummingbird nest thanks to Yvonne's discovery. 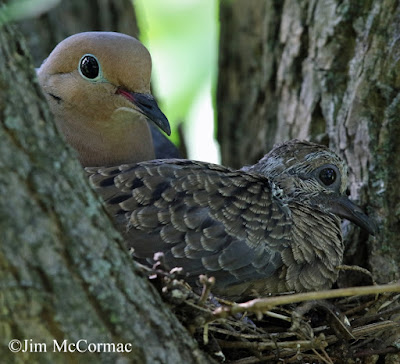 We always have hikes on Mount St. John's 160 acres of grounds, which sports a great array of native plants thanks to almost three decades of effort by Don Geiger. It is the season for second broods, and we found a nest of Mourning Doves on one of the walks. She was tending to two squabs, one of which is practically underneath the adult and not visible in this photo. Of course, I don't know what brood this might be for the dove this year - they are prolific nesters and have been documented breeding in every month of the year in Ohio. 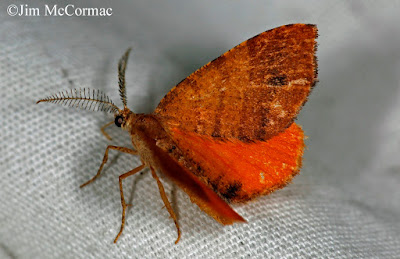 Scott Hogsten brought his mothing gear, as in year's past, and set up near the building. He lured in lots of cool stuff on both Friday and Saturday nights, including this Orange Wing, Mellilla xanthometata. 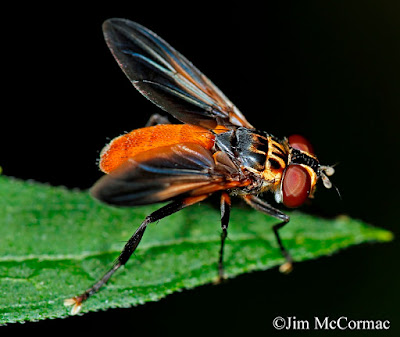 The night hikes are always popular. All we have to do is walk out the front doors of the Bergamo Center and we're soon finding lots of interesting things. Dozens of people scouring the landscape with flashlights usually turns up some noteworthy animals, such as this showy Feather-legged Fly, Trichopoda pennipes. 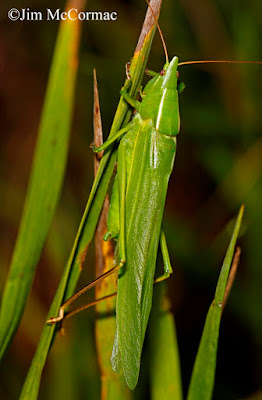 Lisa Rainsong and Wendy Partridge help with the night hikes, which is fantastic as they are experts on the Orthoptera, or singing insects. Perennial crowd-pleasers are the coneheads, and they didn't disappoint this year. Above is a Sword-bearing Conehead, Neoconocephala ensiger. I think some people think we're pulling their leg when we tell them about these big bullet-shaped katydids with the funny names. But they're quite real, and after one of these nocturnal forays everyone has a much greater appreciation for coneheads. 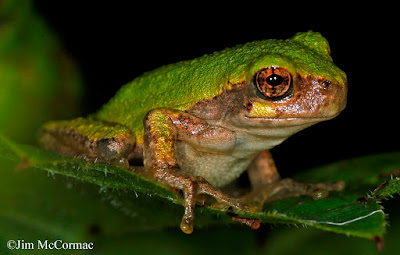 Sunday concludes with field trips to one of the nearby prairies, wetlands, or woodlands. Experts who know the sites well lead these, and it's a great immersion in natural history. I lead the trip to Cedar Bog, and we always find lots to look at, which is not hard at this place. Cedar Bog has perhaps the richest botanical diversity of any similar-sized site in Ohio, and that spawns lots of animal diversity, such as this Gray Treefrog, Hyla versicolor.

To date, the Midwest Native Plant Conference has raised over $50,000, which has been awarded to worthy conservation organizations in Ohio. This year's recipients were Cedar Bog, the Ohio Chapter of The Nature Conservancy (for their Sunshine Ridge Corridor project), Beaver Creek Wetlands Association, and the Marianist Environmental Education Center.

Next year's Midwest Native Plant Conference will be held, once again, at Bergamo Center and the dates will be July 8, 9, & 10. Hope to see you there.

I am so excited that so many people are excited about native plants! Woo hoo! :)

Awesome photos Jim!
We were so excited to see our first hummingbird nest!