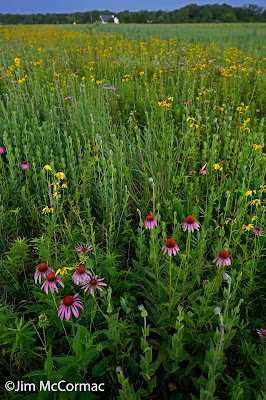 A palette of color, courtesy of some Grade A prairie plants, stretches as far as the eye can see at Prairie Oaks Metro Park in Madison County, Ohio. Franklin County Metro Parks has long been on a mission to restore big chunks of the former Darby Plains prairie, and their successes are there for all to see. We're fortunate indeed to have such a fine parks system in Central Ohio; a park system that thinks as much of native flora and fauna and natural ecosystems as it does ball fields, playgrounds, etc.

I was on a photographic mission in the prairies and fens west of Columbus today, and managed many keeper images of a wide-ranging cast of subjects. The scene above was a no-brainer; anyone armed with a camera would have stopped for photos. However, as I took the image above, to my back was a great prairie thunderstorm rolling in from the west. Shortly after making the image, I was forced into the car and beat a retreat to the building that's visible in the backdrop of this photo. 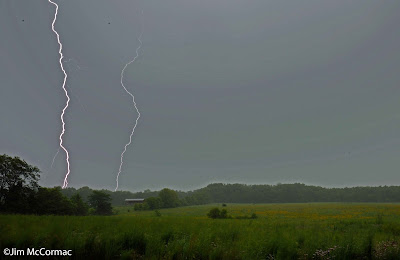 Always one to make lemonade from lemons (or sometimes, at least), I saw the roofed, east-facing porch of my sheltering building as an excellent spot to try for some lightning images. Thor only knows enough of it was zapping down from the turbulent rain-filled skies, each strike followed by the loud booms of thunder.

So I grabbed my tripod, Canon 5D Mark III, the Canon 16-35 f/4 lens, and a remote shutter release and beat feet to the shelter of the porch. I had never tried shooting lightning, but sort of knew the principles behind it. I took a lot of images, but managed only this one keeper. Part of the problem was there was still too much light, despite the blackish skies. That meant it was hard to get a decently underexposed image with a super-slow shutter speed. After realizing this I rushed to the car to grab a polarizing filter, as that would kill a few stops of light. But by then, it was such a monsoon my filter got wet and I forgot to grab a soft cloth to dry it with.

Ah well - live and learn. Anyway, for those of you into photography, here's the parameters for this shot: Canon 5D Mark III with 16-35 f/4 lens set to 35mm, tripod-mounted and shutter tripped with remote release. F/22; ISO 50; shutter speed 1.3 seconds. The crazy settings were an effort to slow down the shutter speed as much as possible, with some intentional underexposure. I think lightning shooting would be much easier at night, and I look forward to trying. 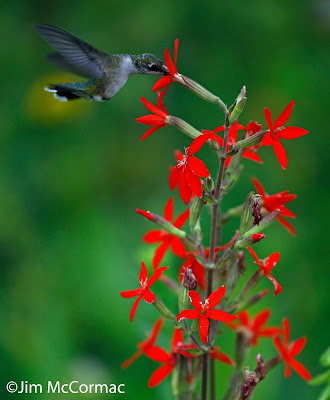 Before I was forced to the building, I had a remarkably fortuitous experience with a female Ruby-throated Hummingbird. I was shooting this Royal Catchfly, Silene regia, with a 180mm macro, and experimenting with various exposures and angles. Shooting bright red flowers, and not blowing out the color, is harder than one might think. Anyway, as I was shooting I noticed this hummingbird rocket into the image just as I pulled the trigger. Voila! Not bad for some dumb luck. The bird took a quick pull of nectar and shot off, probably seeking shelter from the storm, too.

Royal Catchfly is one of the coolest native plants that can grace a garden. I will GUARANTEE that if ANY hummingbirds are in the neighborhood, they WILL be frequent visitors to your catchfly. This weekend's Midwest Native Plant Conference in Dayton will be awash in a diversity of excellent natives courtesy of our various vendors, and I'm sure someone(s) will be selling Royal Catchfly. If you can swing it next Saturday, stop by the conference and pick up some catchfly and other highly valuable native plants. Your yard, and the world, will be better for it. Conference details are RIGHT HERE. While the conference itself is long sold out, all are welcome on Saturday for the plant sale.
at July 19, 2015

Ditto what Linda says. And oh my gosh, the reds on that flower are almost blinding!!
Nicely done!