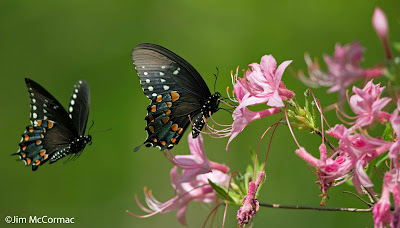 A Spicebush Swallowtail, Papilio troilus, pulls nectar from the blossom of a Pinxter-flower azalea, Rhododendron periclymenoides. A rival flutters in from the left, and it displaced the other butterfly a second later.

I made this image back on May 15 in Shawnee State Forest, Scioto County, Ohio. The azaleas were in full bloom, and offered irresistible photo subjects. It didn't take long to see that swallowtail butterflies were drawn to the blossoms in large numbers, and soon those became the target of my lens.

Pinxter-flower is a rare plant in Ohio, with an official designation of threatened. Just to roil the botanical waters a bit, there is a very similar species, the so-called Roseshell Azalea, Rhododendron prinophyllum. The latter differs in its shorter stamens and pubescent undersurfaces of the leaves. At one time they were lumped (rightly so?) as varieties under one species, Rhododendron nudiflorum.

The blurry taxonomy of this beautiful azalea is not the point here, anyway. Its pollination is. A few weeks after I shot this photo, and observed numerous swallowtails pillaging the pinxter-flowers, an interesting paper came out from a researcher at North Carolina State University. Biologist Mary Jane Epps, along with colleagues Suzanne Allison and Lorne Wolf, published a study entitled Reproduction in flame azalea (Rhododendron calendulaceum Ericaceae): A rare case of insect wing pollination.

While the target of Epps' research was Flame Azalea, it should be noted that that species is very similar structurally to Pinxter-flower and it would seem likely that the same pollinator requirements come into play. As a footnote to plants in the genus Rhododendron, the species with deciduous leaves are the azaleas; those with leathery evergreen leaves are generally called rhododendrons.

For those into photography, I made the image using my bird rig: Canon 7D Mark II mounted to Canon's 500mm f/4 II lens, on a tripod. Shooting the butterflies posed a topographical challenge. The best, most floriferous azaleas were on very steep slopes and it was nearly impossible to ascend to them and balance one's self on the loose soil near the plants. So I discarded the idea of using close-range macro gear and just set up the big rig on a flat stable surface by the road below. Worked like a charm, and I was able to get better images than I would have with the usual macro setup. This would only work well on the largest butterflies such as swallowtails. I'll stick with macro gear for lesser butterflies.

Your photographs are stunning. I am fascinated by the pink rose coloured moth image you posted here. Amazing image, amazing creature.

Just found your blog, Very nice stuff. Thanks for the photo info too. I'm using a Nikon 3200 with a 300mm lens and photographing birds in the woods has proved to be an issue. Mostly with focusing quickly. The 3200 is at the lower end of the DSLR spectrum so surely that is an issue, but wold interesting in how you set your camera's AF up. Thanks!

Hi Jim,
I am the editor of American Butterflies, the quarterly magazine of the non-profit North American Butterfly Association. We are going to run an article by Mary Jane Epps about pollination of azaleas by butterflies and would like to use your photo of Spicebush Swallowtails at a pinxterbloom azalea to help illustrate the article, attributing the photo to you, of course. If this is OK with you, I'd appreciate it if you would send a high-resolution, uncropped version of the photo, without copyright notice or watermark, to me at glassberg at naba.org.

Thanks for considering this request!