Back on July 17, I had an early morning meeting in Athens, Ohio. The meeting was early, because this is a beautiful part of the state that's full of interesting biodiversity, and I wanted time to explore after the work was done. My fellow meeting attendees were amenable to the early morning rendezvous, and I'm grateful as it left plenty of time to explore the outdoors afterwards. While, as always, I was interested in just about everything I could see, there was a primary focus to the field work - locating one of our coolest orchids. 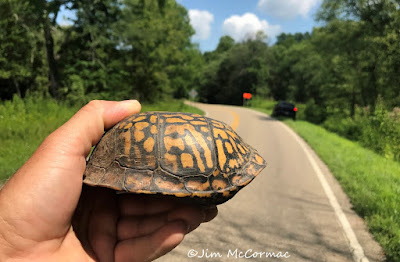 After departing Athens, I headed to neighboring Vinton County, long a favorite of mine among our 88 counties. Vinton County is sparsely populated and mostly wild, and there is always lots of intriguing flora and fauna to be found.

On the way, I noticed a Box Turtle attempting to cross the two-lane state highway I was motoring on. As is often the case when a vehicle goes by, the turtle stopped its SLOW and perilous progress and boxed itself into its shell. This, of course, ups the odds that they'll get pancaked. Fortunately, this was not a busy road and I jammed the brakes, whipped off the road and trotted back to grab the animal. He was placed far off the road, on the side he was headed for, and my future good karma credits increased. These amazing little tortoises can live for many decades, and merit all the help they can get. 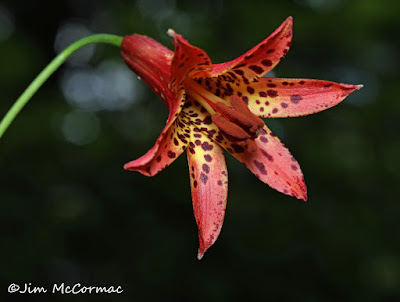 Before long, I began to notice the enormous candelabras of flowers of one of our most spectacular native lilies, the Canada Lily, Lilium canadense. It would have been irresponsible of me not to stop and admire some of them. A whopper can reach well over one's head in height, and the inflorescence might sport ten or more of the reddish fawn-spotted flowers.

Nice as the lilies were, my target remained to be found. 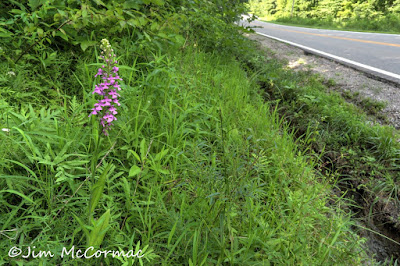 Ah! A bright pink spike of flowers erupts from the springy soil of a roadside seep! This is it, the incredible Purple Fringeless Orchid, Platanthera peramoena, certainly one of the showiest of Ohio's 47 native orchid species. While I've seen this orchid a number of times over the years, it had been too long since renewing its acquaintance. When that Athens meeting came together, I realized it would be prime time for purple orchids, and they would be fairly close at hand. Heading out to find it was a no-brainer. 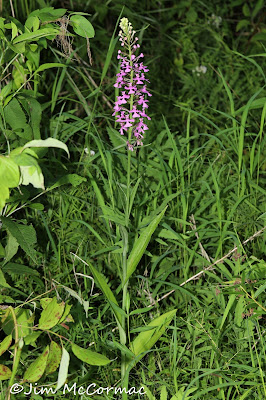 It wasn't too tough to locate some plants, but none were truly exceptional specimens. After a bit more road cruising, I came across the champion above, which towered over two feet skyward, and whose blooms were pitch-perfect. I spent a lot of time admiring this plant, and playing with different photography tactics. 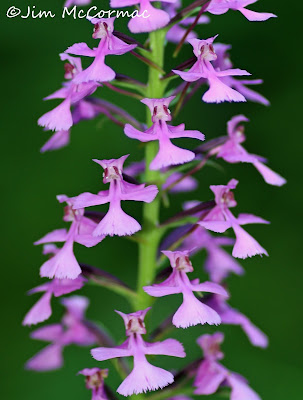 The flowers are beyond awesome; little screaming purple angels, wings spread wide. It seems to me that if everyone knew we had plants like this, everyone would become a botanist. How some people can be utterly indifferent to such beauty is completely beyond comprehension.

You may have noticed the fringes on the flowers' petals. But it is named the "fringeless" orchid. As a point of comparison, there are a couple of species of "fringed" purple orchids and their fringing is so extreme that I guess this species doesn't even count in the petal laceration department.

Apparently the primary pollinators of Purple Fringeless Orchid  are hummingbird moths in the genus Hemaris. I would have loved to have photographed one in the act of orchid pollination, but despite staying around as long as I could, no moths made the scene. Ah, well, one should always have goals and shooting a hummingbird moth at Purple Fringeless Orchid remains one of them. 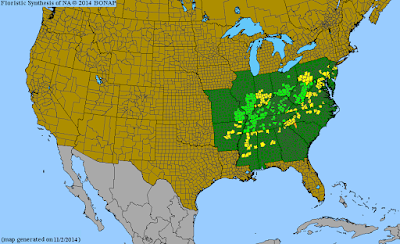 Ohio lies at the northern limits of the Purple Fringeless Orchid's range, and it isn't common here. It certainly doesn't occur anymore in some of the counties marked on this map.

While it takes a bit of effort and knowledge of its locales, locating Purple Fringeless Orchids is a definite botanical highlight of mid-summer.

I've never even been aware of this one, but we do have the Prple-fringed Orchid, and yes the fringe is very obvious. Otherwise a very similar plant.