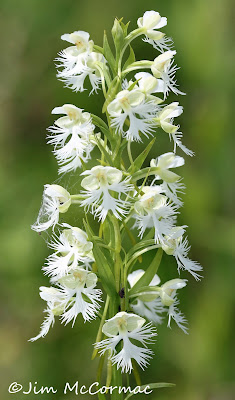 “Strike while the iron is hot.”
— John Deere
So said the famed purveyor of plows, shortly after launching his first chisel plow in 1837.
Once agriculturalists got a way to cut the thick sod, they wasted no time converting rich prairie biodiversity to crops. In little more than a century, most of Ohio’s prairie had been plowed.
Today, the destruction is nearly total. Of the million acres of original prairie that blanketed Ohio before European settlement, about 99.9 percent has been planted with a botanical triumvirate of beans, corn and wheat.
There have been untold losers in the prairie apocalypse. Midwestern prairies harbored some of North America’s richest biodiversity. Legions of plant species flourished in the rich soil. They in turn fostered a bewildering array of insects, which served to fuel scores of higher animals.
Many prairie plants are now imperiled. Among the rarest is the prairie fringed orchid (Platanthera leucophaea). This stunning plant was probably common in Ohio’s prehistoric prairies, but it is now reduced to a smattering of small populations in a half-dozen counties.
The prairie fringed orchid is a plant of stupefying beauty. A whopper can eclipse 3 feet in height and be bedecked with dozens of creamy-white flowers arranged on a spike. These flowers are deeply cut and fringed, and they look every bit as exotic as any tropical orchid.
For having the temerity to grow in soils destined to become America’s bread basket, the prairie fringed orchid has nearly vanished. It is listed as federally threatened — the rarest of the rare and one of only six plant species thus designated in Ohio.
Fortunately, there are a few protected populations. One of these is under the stewardship of the park district in Clark County, a county west of Columbus that includes Springfield. Land managers there have done well in fostering the plants.
One does not just sow orchid seeds and expect plants to burst forth. Most orchids, the prairie fringed orchid included, require the presence of mycorhizal fungi. The specialized fungi forge an alliance with the plant’s roots and help it to better utilize water and nutrients. Artificially creating this specialized subsurface relationship is nearly impossible.
Moths are another vital ingredient for the prairie fringed orchid. Each flower is equipped with a specialized nectar spur; this tubular appendage can be 2 inches in length.
Come dusk, the flowers emit a subtle sweet perfume. This scent lures any of a few species of large moths, which then plumb the depths of the nectar spur with extraordinarily long proboscises. In the process, they cross-pollinate plants.
I had long wanted to see the moths in action, and try to photograph them. So, on the evening of June 26, I encamped near a giant orchid deep within a beautiful prairie remnant in Clark County, and I awaited a moth.
As time passed and I began to wonder if I was on a fool’s errand, there it was! Like a fluttering wraith, a large Carolina sphinx materialized from the gloom and began to plumb the orchid’s flowers. I managed a few images, one of which appears with this column.
One can only wonder what miracles of nature we destroyed with the wholesale slaughter of our prairies. Had our species only had the vision to protect even 10 percent of this magical ecosystem, our world would be a far richer place.
Naturalist Jim McCormac writes a column for the Dispatch on the first, third and fifth Sundays of the month. He also writes about nature at www.jimmccormac.blogspot.com 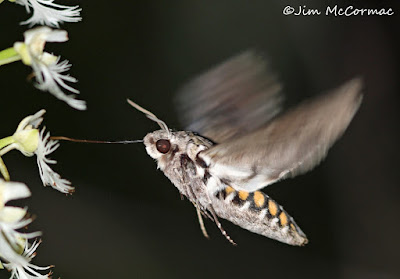 A Carolina sphinx moth snaking its long proboscis into a prairie fringed orchid
at July 30, 2017

What an amazing photo! It was nice seeing you on Saturday. We took a really nice stroll through the wildflower meadow at the bottom of the hill, as you suggested.

Wonderful article and beautiful photos ! The power of words and pictures to tell the stories ! Great work.
L