Boom in fearsome stag beetles a boon for ecology 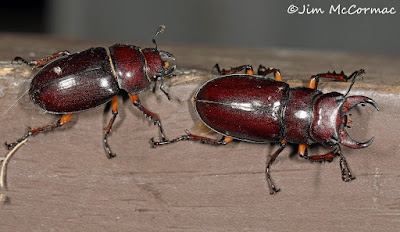 A female stag beetle, left, has smaller "horn" than does a male, right

The scene has played out scores of times this summer: People are sitting in their yards, a park or anywhere outside, when suddenly a giant buzzing bug whirs in.
To the terror of entomophobes, the insect sometimes lands on people.
Meet the reddish-brown stag beetle, or “pinching beetle,” Lucanus capreolus.
At first blush, an adverse reaction is understandable. A stag beetle is a superficially intimidating insect. It tapes out at about an inch and a half, and that’s not counting the impressive mandibles. The latter are what people notice first.
A male stag beetle’s mandibles are a pair of ferocious-looking curved appendages arcing forward from its head. The female’s “horns” are much smaller; the accompanying photo shows both sexes.
Although one of these beetles can give a good nip if mishandled, they are not aggressive and do not ordinarily pinch people. Like many horned or antlered mammals, the male beetles use their impressive appendages to spar with one another during breeding season. Presumably the dominant alpha gets the girl beetle.
This has been a boom year for stag beetles. Blizzards of reports have surfaced on social media and elsewhere, from nearly all quarters of Ohio and beyond. This species occurs throughout the eastern U.S. and Canada, and reports suggest the beetle has been plentiful in much of its range.
A chance encounter with a stag beetle is an opportunity to inspect one of our most interesting insects.
Adults feed on tree sap and are mostly nocturnal. They are strongly attracted to night lights, which is why they often turn up on porches and at other illuminated spots.

These beetles can live for two years, but much of that time is spent in the larval stage. The grubs are as impressive as the adults. They are finger-sized tubular bags of goo capped with a chestnut-colored head capsule. You’re unlikely to encounter the larva, though — they remain ensconced in decaying wood.
Stag beetles play a vital role in the decomposition of rotting wood. The larvae chew and digest the woody cellulose, and in the process convert vegetative matter to digestible protein. This is much to the benefit of woodpeckers, who seek out the grubs. Even to a crow-sized pileated woodpecker, a stag beetle larva is the equivalent of eating a footlong hot dog.
In general, dead and dying trees support far more life-forms than healthy, living trees do. The stag beetles are part of an enormous ecological web associated with timber that is, in forestry parlance, “over-aged.” If you are fortunate enough to have timber on your land, leave as many dead and downed trees, stumps and logs as possible. You’ll be making great contributions to the circle of life that we all depend on.
The recent stag beetle boom might be due to the invasive emerald ash borer. This beetle has decimated our ash population, and the landscape is full of dead and dying trees. If so, this would be an interesting twist— a terribly destructive invasive beetle causing a spike, at least temporarily, in the population of one of our most valuable and interesting native beetles.
Naturalist Jim McCormac writes a column for The Dispatch on the first, third and fifth Sundays of the month. He also writes about nature at www.jimmccormac.blogspot.com.

Jim, I've seen a many of these guys on our school playground/garden (I'm a pre-k teacher in the Short North). The kids LOVE them!

Btw, I love your site! I'm starting a nature connection program at my school, and I've used your site and info a few times for reference. Thanks for doing what you do!