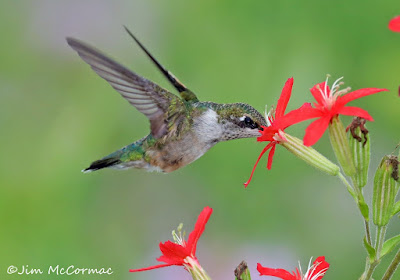 A Ruby-throated Hummingbird plunges its long swordlike bill deep into the corolla of a Royal Catchfly, Silene regia, flower. Hummingbirds are the primary pollinators of this beautiful prairie plant.

I promised in the last post to share a few photos of the fruits of my hummingbird photography labors. Last Thursday, July 20, I was at Huffman Prairie near Dayton, Ohio shortly after dawn. I knew the catchfly would be at peak flowering, and this would mean lots of hummingbirds. There are few if any better situations in which to photograph Ruby-throated Hummingbirds, and as that was probably the only day I'd get a crack at this, for this year at least, I wasn't going to waste it.


Botanist Thomas Nuttall, a man who had seen a tremendous spectrum of our flora, called the royal catchfly "one of the most splendid species in existence." Adding to its allure is the fact that Ruby-throated Hummingbirds are its primary pollinator. Standing in a large prairie dotted with the scarlet spikes of catchfly, with numerous hummingbirds darting about tending to the colorful flowers, is near magical.

Even if I never attempted a photo, I'd still savor the time spent watching these feathered sprites shooting about the rich prairie, tapping nectar from catchfly plants, snapping tiny insects from the air, and constantly sparring with one another. The sheer aggressiveness of these elfin birds is astonishing. As often as not, I'd be setting up on a hummer that starting exploring a plant's flowers, when another bird would strafe in at top speed and send my photo subject packing. Occasional, two birds would get in a real dust-up, spiraling up, up, and up, chittering and buzzing around each other until they were tiny specks in the sky. 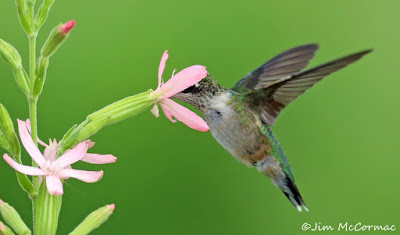 Royal Catchfly flowers are normally the brilliant scarlet of those in the preceding photo. However, a very small number of plants at Huffman Prairie sport these gorgeous pale pink blossoms. I've only seen this variant one or two other places, both in Ohio prairies. It apparently does occur very sparingly in a few locales outside of Ohio.

I picked my photo spot carefully. The patch of trail that I set up on had plenty of normal catchfly plants, including a few large sentinels. Best of all, though, were two nearby fine pink-flowered specimens. I figured that sooner or later, a hummingbird would visit these botanical oddities and give me a chance to shoot it in the act of going pink. Sure enough, I did get a few opportunities and the shot above is one of the successful attempts.

Photographing hummingbirds isn't easy, and requires considerable patience. At least if you're shooting them in the wild, on their own terms - not at a feeder. I spent about four hours, mostly in the same spot, awaiting opportunities. None of it is time wasted. One learns tons about hummingbird behavior by doing this. Plus, bonuses abounded. A Dickcissel chattered its song from nearby high-rise plant stalks the entire time. Bobolinks passed overhead, giving their mellow pink pink call notes. The soft insectlike hiccup of a male Henslow's Sparrow provided aural accompaniment. Two rival Common Yellowthroat males routinely launched into their flight songs, ascending about 25 feet vertically into the air all the while delivering a more ornate version of their song, then fluttering feet down back into the vegetation.

I tried a new tactic with equipment this time, screwing on my Canon 800mm lens to the 5D IV. More is better, you know. It was overkill, and I probably won't use it again for hummers. That lens has a minimum focusing distance of about 19 feet, and on several occasions hummers came much closer than that, sipping from nearby flowers and offering what would have been awesome shots with a lesser lens. I've got a smaller, lighter 500mm that focuses to 7.5 feet, acquires focus faster, and is just as razor sharp. That's the lens for hummers, at least in a situation like this. Fill flash came from a single on-camera Canon 600 II speedlite intensified with a Better Beamer, all of this equipment atop a tripod, of course. I used shutter speeds ranging from 1/2000 to 1/3200, depending on lighting conditions. On high speed sync mode and at shutter speeds above the 1/200 sync speed, the flash loses a ton of intensity, and its working distance becomes ever shorter the higher the shutter speed goes. ISO becomes the ruling factor - I don't like running it beyond perhaps 1600, and am much happier with 800 and below. Nonetheless, even though these images were made at ISO's over 1000, they still look pretty clean and noise-free even without much post-processing work. I also shot the lens wide open - f/5.6 - to permit entry of as much light as possible.

Good to learn simultaneously about the Prarie flora & fauna and your shooting strategies. Does the flash appear to affect the hummers?

Yes. It singes most of their feathers off. Fortunately, they grow back before migration time :-/

We have a pink catchfly this year. It appeared first time ever in a place where we previously had no catchfly. We have about a dozen (red) plants in the garden/yard so we suspect it self-seeded. Nice photos but do watch singeing those hummer feathers :-)