I visited the famous Huffman Prairie last Thursday, mainly to photograph hummingbirds. The Royal Catchfly, Silene regia, is at peak bloom, and there are many Ruby-throated Hummingbirds. This plant is primarily pollinated by hummingbirds, and I can think of no better setting or situation in which to photograph these tiny birds. I did manage some nice images of hummingbirds face deep in the catchfly flowers, and will perhaps post some of those here later. CLICK HERE, though, and you can see my efforts from last July.

A prairie as rich as Huffman always has legions of INTERESTING THINGS, whether they be floral or faunal in nature. After packing up the big lens, I had a few minutes before I had to leave to go teach a macrophotography course, so I clipped on a macro lens and set out to see what I could find in a short time frame.

I didn't have to wait long. I'd barely got 30 paces from the Jeep when a strangely shaped, largish tan and black blob whirred by. Giving chase, I followed the UFO for a short distance, trying to place what I was seeing, when it had the good manners to alight on some foliage. Scroll on... 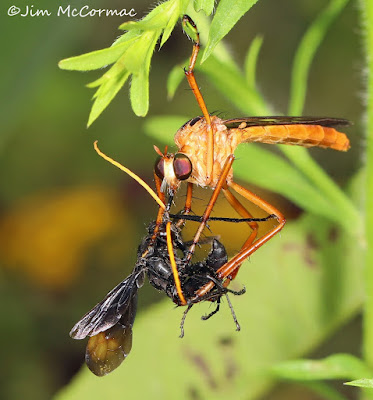 A "Hanging Thief"! Not only that, but it had bagged a large wasp! This is the aggregation of predator and victim that buzzed by me, and why I had a hard time placing it while on the wing.

The so-called hanging thieves are robberflies in the genus Diogmites. There are supposedly two dozen or so species in North America, and I'm unsure of the species involved here. Maybe someone can let us know. They've earned the name "hanging thieves" by their peculiar perching habits. Our star in this scene illustrates this perfectly. Note how it casually dangles from one leg, its "foot" wrapped around a leaf, while it deals with the wasp with its other five legs.

Robberflies typically hunt from perches, and when a suitable victim flies by, the robber launches and strikes it on the wing. It uses its long, spiny legs to embrace the prey in a death grasp, and administers the coup de grace with its long syringelike proboscis. Debilitating neurotoxins are pumped into the victim, nearly instantly disabling it. Other compounds cause a speedy liquefication of the innards. The robberfly retreats to a comfortable perch, as this one has done, and casually sucks out the sloshy contents with the same proboscis that dealt death to the hapless prey.

I will tell you right now, were these robberflies the size of swans, it would be the stuff of our worst nightmares. They are entomological Clint Eastwoods; true tough guys seemingly without fear and capable of taking down even the most dangerous of insects. I'm not sure which wasp species this hanging thief has captured, but it looks like it might be one of the spider-hunting species, which are quite tough in their own right and also pack a stinging punch.

But even a big wasp is no match for a fearsome robberfly.

Just found out these guys existed... saw 1 on our tomato plant in my school's garden and 1 on a Mulberry bush in Westerville... just sitting and waiting for the next victim apparently!

Thanks again for your awesome blog!