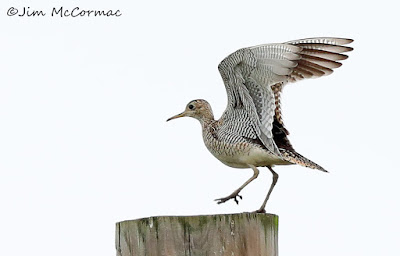 An upland sandpiper alights on a telephone pole in rural Ashtabula County.


No Ohio-breeding bird migrates farther than upland sandpipers.
These long-winged shorebirds breed in hayfields, meadows, prairies and other open places. That stands in contrast to most shorebirds, which choose to breed in wetland habitats.
Upland sandpipers also winter in wide-open country — but at the other end of the world. Most “uppies” migrate to southern South America, with some birds making it as far as Buenos Aires, Argentina. That’s almost 6,000 miles south of Ashtabula County, where I took the accompanying photo.
I recently spent time observing a family unit of upland sandpipers frequenting farmland in Ohio’s largest county, in the northeastern corner of the state.
Shortly after arriving, I saw one of the birds fly to the top of a telephone pole, where it watched over its domain. For the next several hours, the uppies put on quite a show, flying about and landing atop poles, perching on wires, foraging in a field, and keeping tabs on two nearly full-grown chicks.
With its long neck and plump body, this species used to be known as the upland plover. But it is indeed a sandpiper. The small head is punctuated by disproportionately large eyes, useful because upland sandpipers are active at night.
Perhaps most impressive are their wings. While the bird is but a foot in length, the wings span an impressive 26 inches. The upland sandpiper is an extraordinary aerialist, and it flies effortlessly with stiff, shallow wingbeats. Some birds make the passage from North American breeding grounds to South America in a week.
The adults frequently vocalized during my visit, and there are few sounds in nature as impressive as the calls of upland sandpipers. It is an ethereal, mournful whistle, as if the wind itself were singing.
Upland sandpipers occupy a large range that extends across the northern states and through the Great Plains and north to Alaska. But the species has declined tremendously, including in Ohio.
Before European settlement, uppies were probably confined to Ohio’s prairie regions, which covered perhaps 5 percent of the state. The birds adapted well to the small, wildlife-friendly farms, and the population probably peaked in the early 1900s, when nesting was documented in almost all 88 counties.
Unregulated hunting from the late 1800s into the early 20th century decimated many species of shorebirds, including upland sandpipers. Barrels full of birds were shipped by train to big city markets, and some species never recovered.
Large-scale conversion of small bird-friendly farms to massive industrial agriculture and destruction of native prairie have also reduced sandpiper populations. Now, the upland sandpiper is listed as endangered in Ohio, and breeding is known in only a half-dozen or so counties.
The large grassy expanses of airports host many or most of our nesting upland sandpipers. Don Scott Field on the Northwest Side has supported them for several years. This habitat seems fitting, as the birds are among the world’s greatest flyers.
Naturalist Jim McCormac writes a column for The Dispatch on the first, third and fifth Sundays of the month. He also writes about nature at www.jimmccormac.blogspot.com.