Life in a drainpipe: How to make photographic lemonade from lemons

As always, no shortage of material as I prepare this, my 1,708th blog entry since beginning this blog almost exactly ten years ago. Mothapalooza was held last weekend and it was a smashing success. I want to put up some pics and commentary about that soon, but for now, an adventure from yesterday. 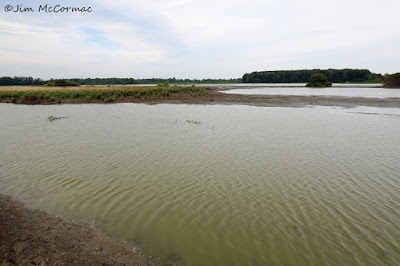 Word has been circulating about great shorebird habitat developing in the easternmost big impoundment at Big Island Wildlife Area in Marion County, so I finally made it there late yesterday to check things out. The reports were not exaggerated; plenty of mudflats and shallow water bode well for waders. We're early in the fall migration for shorebirds - yes, fall migration in mid-July! - and there weren't a lot of birds. Killdeer were most common, probably mostly birds that bred somewhere in the general region. Others included Lesser Yellowlegs, Pectoral Sandpiper, Least and Semipalmated sandpipers, and Solitary and Stilt sandpipers. Most of these birds have already been to the Arctic to nest, but probably experienced nest failure. The brief Arctic summer does not always allow for a second attempt, so the birds head south and begin to appear at our latitude in July.

I took the photo gear, but conditions were not great for photography, so I mostly just watched the birds, and life in the marsh. I've always enjoyed watching groups of shorebirds, and their feeding dynamics. For birds that seemingly always have their bills buried in the mire, they don't miss a trick. Several juvenile Bald Eagles were making regular forays into this impoundment for fish, and if they got too near the shorebirds would often rise en masse before settling back in. Always pay heed to their behavior - they'll tip you to an incoming Peregrine Falcon or other predator long before you'll see it. 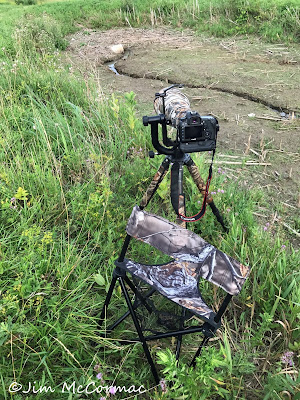 At one point, I decided I wanted another piece of gear from the Jeep, about a third mile from my hiding hole, so I trotted back for it. As I neared the parking area, I saw the grass moving and a brief flash of brown. Juvenile Muskrats! After spending some more time with the shorebirds, I stealthily crept up on the muskrat ditch. That's it, above, after I had settled in with camera, tripod, and camo chair. You can see a culvert at the far end of the ditch - it connects with the big marsh which is about 30 feet or so to the left. Most of the photographic action on this day centered around that pipe. 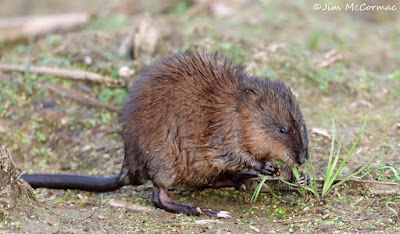 Immediately upon peeking into the ditch, I saw an adult Muskrat grazing on plants. I'm not sure how well these rodents see, or if she just wasn't bothered by me, but she remained in the open for a bit while I made images. Nice as she looks, it wasn't the photographic plum that I sought. 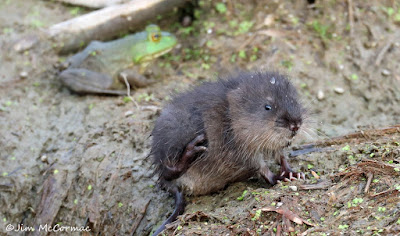 This is the photographic plum that I sought - baby Muskrat! Not long after I settled into the vegetation, this little fellow dropped out of the drain pipe and clambered up onto the adjacent bank. Here, he scratches an itch, while a large bullfrog looks on. The little mammal was not a lot larger than the frog! There was another juvenile 'skrat, and I was hoping to get images of both together - maybe even interacting - but no cigar. 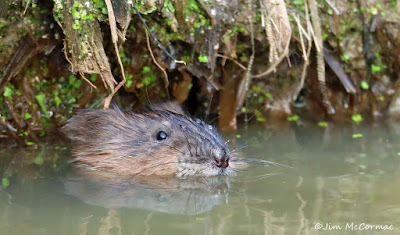 For most of the time that the youngsters were out and about, an adult Muskrat - female, presumably - was around although sometimes hard to spot. Here, she keeps a watch from the entrance to one of her burrows. Muskrats are prolific burrowers, and thus draw the ire of marsh managers as their tunneling can greatly undermine the dikes that hem in many managed wetlands. But we've pretty much invited them into our all too often highly managed world, so what would we expect, especially seeing how we've destroyed most of their natural world. Ohio has lost an estimated 90% of its pre-settlement wetlands. 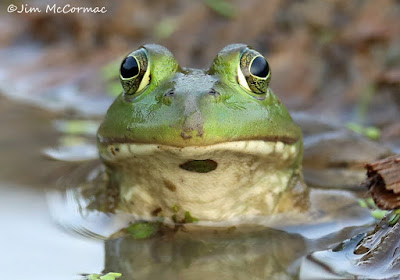 After the Muskrat family retreated back into the drain pipe and probably into the big marsh on the other side, I turned my camera's attention to the large Bullfrogs by the culvert's mouth. Here, a lunker stares inscrutably at the camera. I once saw a huge Bullfrog sitting just like this, with a much smaller Green Frog's head poking out of its mouth. I didn't have a camera then, but would have loved to photographed that scene. 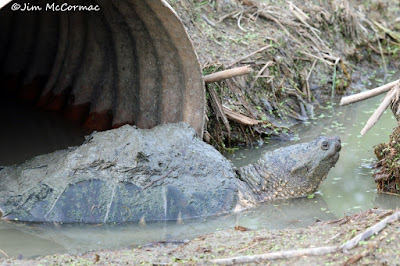 As I was photographing the frogs, I noticed a roiling from within the culvert pipe, with noticeable waves coming from within. I thought that perhaps the Muskrats were in there, but the wave action seemed to extreme. A few seconds later, this absolutely monstrous Snapping Turtle emerged!

As I was above and behind the pipe when the turtle exited, it didn't see me and I ran around to the other side to get this shot. At that point, he/she did spot me and froze, allowing for some close up portraiture work of a beast that totally looks the part of its several hundred million years of evolutionary history. 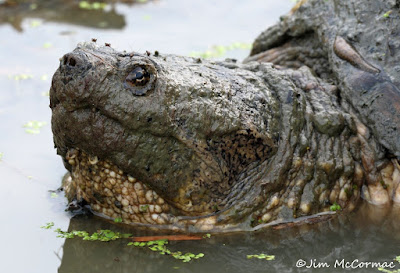 I would not want to get my finger nipped by this brute. A turtle this size could and would do some serious damage if mishandled, and snappers are not known for their friendly temperament. They can live a long time - 50 years or more - and I suspect this one would have to be at least a few decades old. Note the numerous mosquitoes biting its head, and the leech on its shell. Maybe that's why they're ill-tempered.

Photo tip: A perfectly still subject such as this turtle allows for employment of techniques not often possible with animals. I had my camera on a tripod, and moved the rig in as close as possible. Then I used live view on the back of the camera, which keeps the mirror locked up, eliminating even the very slight "slap" caused by mirror motion. Using the two second timer allowed the camera to be totally still when the shot fired. This allowed me to use a very long exposure at a small aperture. Settings for this image were ISO 100, f/16, and a very slow one-third second exposure.
at July 13, 2017

I don't think muskrats can see well. I've had them waddle up to within ten feet of me if I'm holding still.
Ditto for beavers. If I'm paddling my kayak the first time I notice their presence is the shotgun crack of their tail's hitting the water as they dive, but sitting quietly in my kayak in front of a beaver lodge at Alum Creek they totally ignored me.

Enjoy your blog posts!
This Spring I was photographing ducks in Killbuck Creek Wildlife Area when a muskrat went swimming by about 30 feet away making a squeaking noise. On a whim I started lip squeaking to see what happened. Mind you, my squeak really didn't sound like its squeak, but it made the muskrat swim toward me, within about 10 feet, where it eyeballed me, trying to figure out what I was. This happened several times that morning.
So try the squeak next time. :-)

Did you notice the "turtle leech" (the common name we gave them as roving youths). Placobdella parasitica, if my memory serves me correctly. It is just behind the head on the carapce of shot one.

I think I wrote shot one but meant shot two, the close up.

That baby muskrat is so so so so so cute! Love all this life in a drain pipe so very much. Thanks for sharing.