Last night was Columbus, Ohio's major fireworks extravaganza - Red, White & Boom. This is the largest fireworks display in the state, and RWB's 37th year. I was there, and managed a number of satisfactory images.

If you're into fireworks, just scroll through the post and enjoy. Remember, as always you can click the photo to see an enlarged version.

If you're into photography, I've prefaced this post with some fireworks photography tips. Each of the images is captioned with the metadata for the photo, too.

As we all know, fireworks are amazing light shows of color and shape. It's natural to want to record them on pixels; keep a permanent memory of a very ephemeral festival of light. Shooting quality images of fireworks isn't too difficult, but it's a technical enough challenge to make blunders easy to commit, and crisp well-exposed images are quite rewarding. I know that most people who read this blog know me as a photographer of most things natural history, but I've yet to find a photographic outlet that I don't enjoy. Practicing on all manner of subjects will only make the photographer better at shooting his/her primary field of interest.

Anyway, here are some thoughts and tips for those of you interested in fireworks photography:

1) Case out the lay of the land beforehand. Frankly, one of the greatest challenges is finding a shooting locale not interfered with by unsightly buildings, wires, poles etc. I spent nearly two hours driving around and rejecting sites before the fireworks launch last night, and I know Columbus quite well. Some 500,000 people descend on downtown for this event, and I knew I didn't want to be in the thick of that. I was angling for a distant site that would keep me free of the masses, provide a largely unfettered view, allow me to include some of the downtown skyline, and be upwind (so that smoke from the fireworks would be less likely to create haze in my images). I finally found the best site I've hit on yet, and was in and out with no hassles and did not have to contend with throngs of people. The main thing I didn't like about this location is that ugly boxy building in the foreground. My search for an ultimate site will continue.

2) Don't be afraid to shoot from a far distance, or use a telephoto lens. While I would love to shoot RWB from its epicenter someday, with a wide-angle lens, I haven't managed to work that out yet in a way that I wouldn't mind dealing with. The images below were shot from a distance of 2.2 miles from the site of the fireworks launch. As long as atmospheric conditions are decent, this shouldn't be much of a problem, and actually has some advantages. For equipment, I used the Canon 5DS-R, and Canon's remarkable 200mm f/2L telephoto. Most people have a zoom lens that covers the 200mm zone and nearby ranges, thus are equipped for distant fireworks photography.

3) Tripod - an absolute must. We're talking very long exposures, and there is no possible way to handhold the camera over such time frames and create sharp images.

4) A remote shutter release. I use an inexpensive cord that plugs into the camera, and lets me activate/deactivate the shutter without ever touching the camera. Stillness is key here. Plus, you never have to look through the camera once all is set up - just watch the show, and work the shutter remotely at key times.

5) Composition. Select a swath of landscape that includes features of interest other than the fireworks, if possible. In this case, I used the neatly illuminated Lincoln LeVeque Tower to bookend the northern (left) side of the shot, and the Baker-Hostetler building on the other side. This composition allowed me to keep the fireworks as the dominant feature, but still include a stretch of downtown buildings for site context. Again, I wish that ugly box-like building wasn't in the foreground, but I'll keep hunting for the perfect locale.

7) Focus. It's vital to get sharp focus on the fireworks themselves. One advantage of working this far back from the show is that it's easier to get both the fireworks and the nearby buildings in reasonable focus. Fireworks bursts such as these are so large and bright that you should be able to auto focus on one of the first bursts, and thus set your focus that way. Once focus is dialed in, don't change it.

8) Try and fine tune all of your settings early on: focus, composition, levelness of camera, and camera settings. If you can dial everything in pronto, you'll be free to focus on creating images for the vast majority of the show.

9) If your camera has a built-in level - and many/most DSLR's do - use it. In such situations, a perfectly level photo is desirable.

10) Use Bulb Mode. Again, most if not all DSLR's have this mode, although it isn't often used. Bulb opens the shutter and keeps it open until you manually close it using - ideally - your remote shutter release. You could make an exposure that was hours long, or as long as your battery lasted, if you wanted. All of the following exposures were multi-seconds long, and some of them pushed a minute in duration.

11) Keep the ISO very low - ISO 100 is best. You'll be making long exposures, which means much light will be harvested by the camera's sensor, so high ISO's won't be necessary. And in ISO-world, lower is almost always better. The images will be cleaner and less grainy/noisy.

12) Use a small aperture. An f-stop between 8 and 16 will probably be best, but it'll require a bit of tweaking at the onset of shooting to find the sweet spot.

13) Experiment with ultra-long exposures by using a dark object to temporarily block the lens. For last night's work, I found that, depending on the color and intensity of the fireworks, I could not expose more than 10-15 seconds without overexposing the image, and we don't want overexposure. However, by leaving the shutter open, but temporarily covering the lens with a dark object every so often to avoid overexposure, you can create one image that displays numerous bursts of fireworks - far more bursts than could be captured without covering/uncovering the lens. This technique is as much art as science, and requires practice.

14) Be prepared to adapt to changing light. Brilliant white bursts of fireworks will necessitate shorter - sometimes significantly shorter - exposures than cooler lights, such as blue.

15) Try and make a quick study of each image on the camera's viewing screen immediately after creating it. By so doing, you'll quickly get a sense of what's working and what isn't, and what tweaks you'll have to make.

16) As always, as in any kind of shooting, use your camera's histogram to evaluate exposure, and make sure the camera's "highlight alert" feature is activated. The latter indicates overexposure by causing overexposed portions of the image as seen on the viewfinder to blink. If you get a case of the "blinkies", you know you've got to either shorten the length of exposure for that situation, or shut down the aperture some more, or some combination of both. Conversely, if the histogram and your eyes indicate underexposure, you'll have to open the aperture, or lengthen the exposure, or some combination of both. 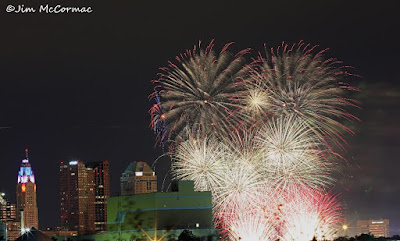 f/13, ISO 100, 51.3 second exposure. This image includes many fireworks bursts, and was created using an ultra-long exposure and periodically briefly covering the lens with a dark object. 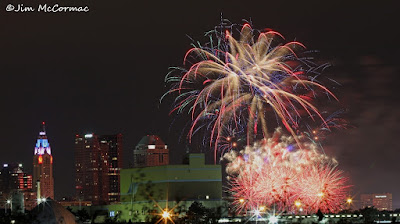 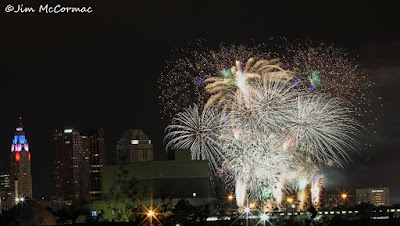 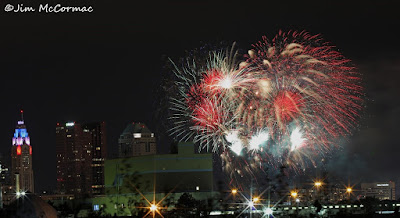 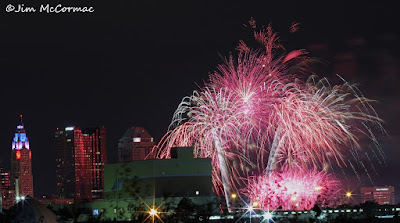 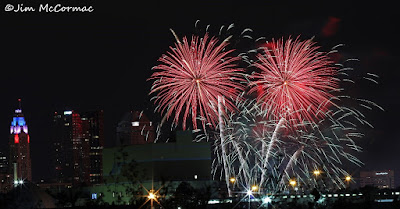 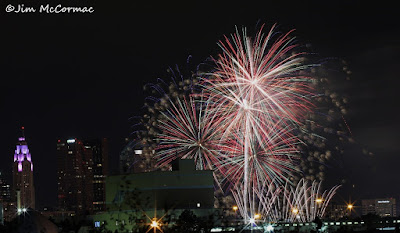 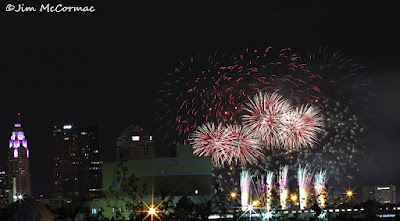 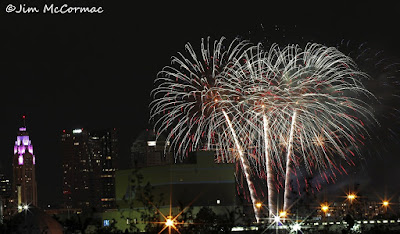 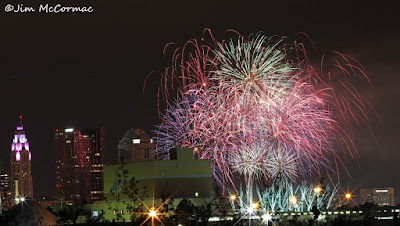 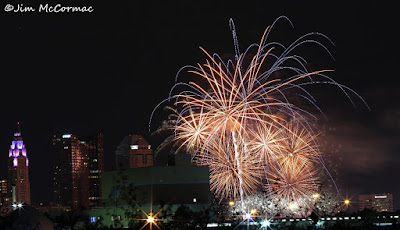 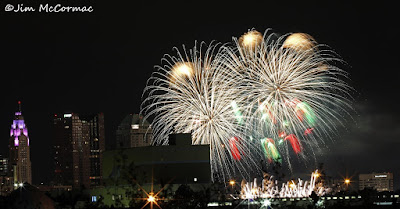 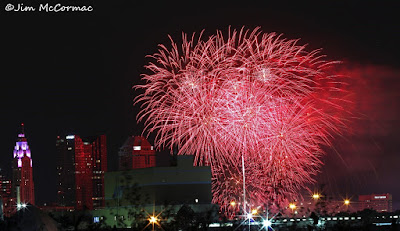 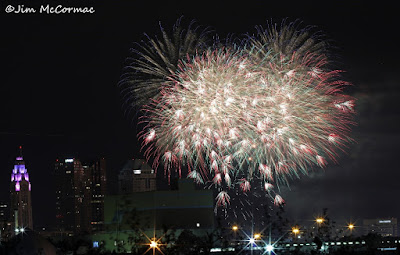