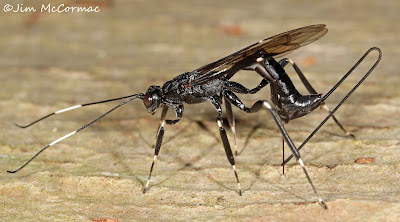 On May 12, I trekked into a wild area of Hocking County along with top-notch biologists Dave and Laura Hughes, and Joe Moosbrugger. We found scads of interesting flora and fauna.

Trumping all was a 1-inch wasp. As we navigated a steep slope, someone noticed an ornately marked wasp on the bark of a dying sugar maple. Its most distinctive feature was an incredibly long ovipositor.

We had found one of the giant Ichneumon wasps and settled in for a ringside seat to part of its amazing reproductive cycle.

The female wasp somehow divines the location of beetle grubs feeding deep in the wood of trees. She then unfurls an ovipositor that might exceed her body length. The wasp slowly bores deep into the wood until her ovipositor makes contact with the victim.

Once she reaches the grub, she squirts a semi-solid egg down her ovipositor and onto the grub. The egg soon hatches and the wasp larva chews into its host and begins eating it alive. It ultimately kills the beetle grub, then forms a cocoon and metamorphoses into an adult wasp. Other Ichneumon wasp species prey on caterpillars, spiders, flies and others.

It took 15 minutes for the wasp to complete her wood-drilling operation. Ichneumon wasps are vulnerable during the process; many are snapped up by birds or other predators as they are lodged in the wood.

Entomologist Ross Hill identified the wasp as Xorides stigmapterus. Naming most Ichneumon wasps is not easy. About 24,000 species have been named to date worldwide. There may be two or three times that many yet to be described. At least 3,300 species have been found north of Mexico.

Xorides stigmapterus preys on wood-boring grubs of the six-banded longhorn beetle. This large beetle is thought to be rare. I’ve seen only one, and it was sensational: bold yellow with tigerlike black bands, and enormous recurved antennae.

Six-banded longhorn beetles are associated with old-growth timber and feed within large sugar maples — the tree species our wasp was on. Thus, it is likely that the wasp also favors climax stage woodlands, mature woodlands dominated by fully grown trees. Such forests are rare and worthy of protection, as they are major contributors to biodiversity.

Fortunately, the site where we observed this wasp — and myriad other critters — is protected as a private nature preserve.

Charles Darwin, upon learning of the horrific (to us) reproductive strategies of Ichneumon wasps, wrote to the American botanist Asa Gray: “I own that I cannot see as plainly as others do, and as I should wish to do, evidence of design and beneficence on all sides of us … I cannot persuade myself that a beneficent and omnipotent God would have designedly created the Ichneumonidae with the express intention of their feeding within the living bodies of caterpillars, or that a cat should play with mice.”

Naturalist Jim McCormac writes a column for The Dispatch on the first, third and fifth Sundays of the month. He also writes about nature at www.jimmccormac.blogspot.com.
at June 19, 2016