The Amen of Nature is always a flower.
--Oliver Wendell Holmes 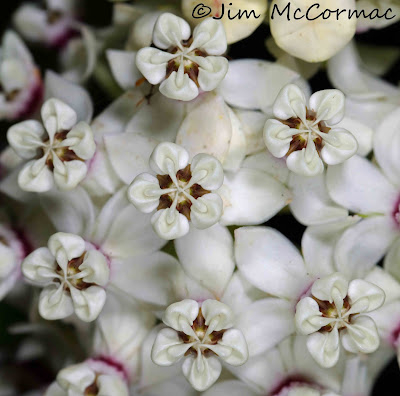 The ivory flowers of White Milkweed, Asclepias variegata, are irresistible to pollinating insects. And photographers.

I had a great day last Sunday down in Shawnee State Forest, birding with Carl and Karen Winstead. We found many species of birds, with good looks at choice feathered bits such as Cerulean, Kentucky, and Worm-eating warblers. Lots of plants, butterflies, dragonflies and other elements of natural history, too.

After the Winsteads and I parted ways in late afternoon, I took the long way out of the forest, stopping to shoot some interesting subjects, mostly plants and insects. And is often the case when loitering around insect-rich plant life, I was witness to a kill by a spectacular flower-stalking insect that hunts other insects. 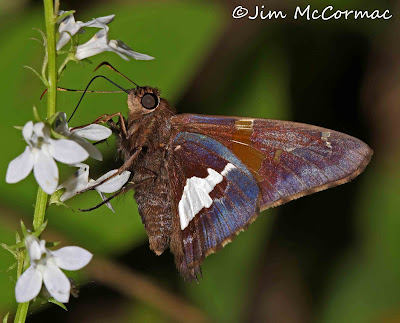 A Silver-spotted Skipper, Epargyreus clarus, taps nectar from the small blossoms of Spiked Lobelia, Lobelia spicata. These large, easily identified skippers are quite common in Shawnee, and are especially smitten with the flowers of American Ipecac, Porteranthus stipulatus, which forms large drifts of flowers along favored road banks. 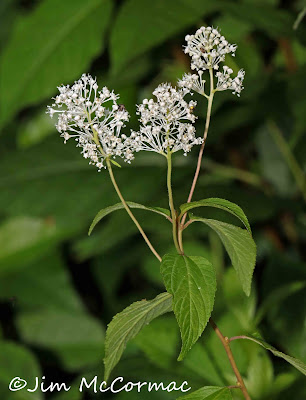 Another plant that is at peak flower right now is the New Jersey Tea, Ceanothus americanus.  This small shrublet often forms rather sizable colonies, and if it is interesting insect activity that you seek, hanging out around the New Jersey Tea is sure to result in some action. 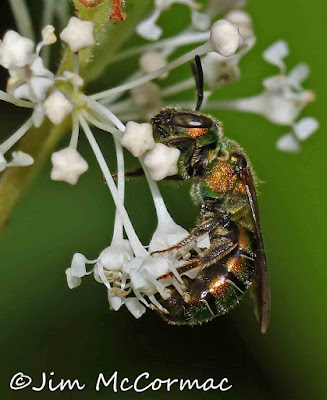 The Lilliputian white flowers of New Jersey Tea are typically awash in small pollinators: beetles, flies, wasps, and native bees such as the one in this photo. 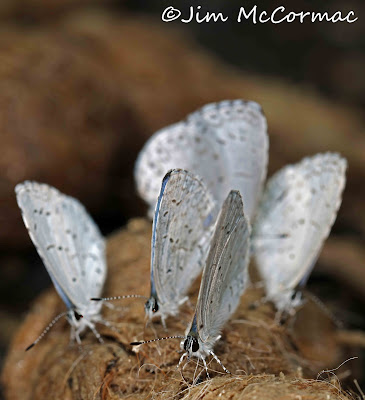 A platoon of Summer Azures, Celastrina neglecta, works over a lump of coyote scat, tapping minerals.  While fresh scat draws many butterflies, they also seek out flowers and the New Jersey Tea is a favorite for some of the smaller species, including this one. 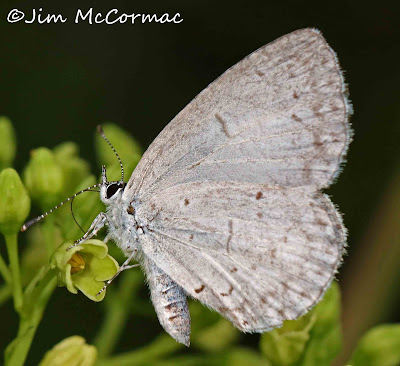 A Summer Azure on a more photogenic backdrop than coyote scat, the flowers of Dogbane, Apocynum cannabinum.

I spent a fair bit of time observing some especially large New Jersey Tea colonies, attempting to photograph visiting pollinators. Many Summer Azures were regular visitors to the flowers. 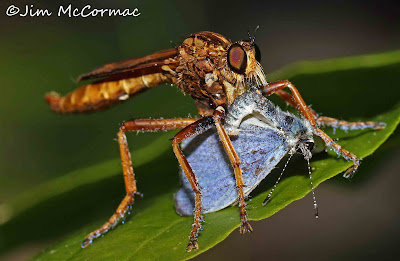 At one point, an odd rather large shape whirred by, looking like it was trailing a small blue flag. Fortunately the unidentified flying object did not go far before settling onto a leaf. A robberfly! With a freshly captured Summer Azure! I crept in and managed a nice series of images of the spectacle.

It turns out that this species of robberfly is Asilus sericeus (thanks to Benjamin Coulter for the ID), and it is well known for attacking butterflies. One source states that it is not particularly common, and my experiences would bear that out. I tend to notice such things as large spectacular robberflies, and don't recall seeing Asilus sericeus before. As robberflies go, it is quite handsome with its rich golden tones.

Once again, the reality of flowers as potential death traps is reinforced. Robberflies and myriad other predators often lurk near flowers that support heavy pollinating insect activity, and routinely make a meal of the flower visitors. Brutal as this may be, it's all part of the circle of life.