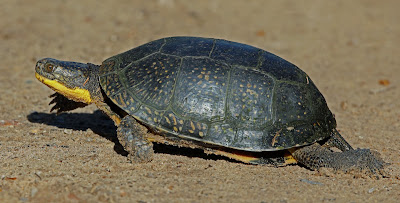 
The average American lifespan is 79 years. One of our coolest reptiles can best that. A cautious Blanding’s turtle can live to the age of 80, or older.
Blanding’s turtle is, insofar as turtles go, a gem. A lunker can reach ten inches in length. The high domed shell suggests the shape of a German WW II army helmet. This carapace is blue-back, and adorned with fine yellow stippling.


This turtle’s most distinctive feature is its lemon-yellow throat and chin. They are highly aquatic, agile swimmers capable of capturing live fish.
A Blanding’s turtle might be thought of as a leaky box turtle. Its lower shell – the plastron – is hinged and can be folded up to seal off the head. But the plastron doesn’t form the drum tight seal of its smaller relative.


Amorous turtles mate in April and May, and commence the business of making little turtles. Gravid females often wander far from water to dig nests in dry soil, in which eight eggs on average are deposited. Temperature dictates which sex the egg will yield. Eggs warmed to 72-82 F produce females; those that reach higher temperatures result in males.
Hatchlings will have to wait at least 14 years before they become sexually mature and ready to add to the stock.


Pioneer physician William Blanding first stumbled into this beautiful turtle while exploring the Fox River in Illinois in 1830. His pickled specimen still resides in the collections of the Philadelphia Academy of Natural Sciences.
It took eight years before the turtle was named. In 1838 herpetologist John Holbrook published its formal description, which included this statement: “… first observed by Dr. William Blanding of Philadelphia, an accurate naturalist, whose name I have given this species.”


William Blanding’s original find came from the western reaches of the turtle’s range. The bulk of its distribution is along the Great Lakes, but populations are relatively few and scattered. The turtle is listed as endangered or threatened in most states and Canadian provinces in which it occurs.
Blanding’s turtle could be a totem of clean waters and healthy wetlands. Habitat degradation has greatly reduced or eliminated them in many areas.


Research has shown that Blanding’s turtles have a penchant for wanderlust. A turtle tagged in 2007 near Toledo turned up again in 2015 – a whopping 17 miles from where it was marked! Their peregrinations make conservation complicated. Protecting only the wetland in which the turtles seem to frequent is not be enough. Much larger habitat mosaics are necessary for their long-term survival.
Blanding’s turtle is listed as threatened by the Ohio Division of Wildlife and confined to Lake Erie and nearby environs. Two good places to see them are Sheldon Marsh State Nature Preserve in Erie County, and Magee Marsh Wildlife Area in Lucas and Ottawa counties.

Naturalist Jim McCormac writes a column for The Dispatch on the first, third and fifth Sundays of the month. He also writes about nature at www.jimmccormac.blogspot.com