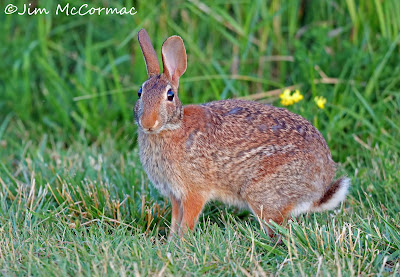 The golden glow of a June sunset in Muskingum County, Ohio illuminates an adult Eastern Cottontail. This is one of the most abundant Leporids (rabbits) in the Americas, ranging throughout the eastern U.S. and south all the way to northern South America. It was even (quite stupidly) introduced throughout the Caribbean and even in Italy. But probably nowhere are they as plentiful as right here in the heartland of Ohio and the Midwestern U.S. 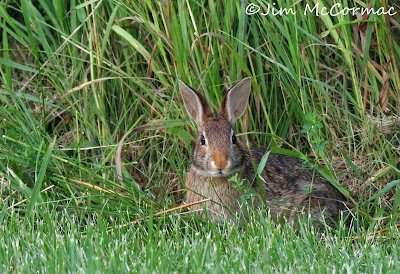 Life is fraught with peril for bunnies. They are basically saltatorial steaks, and many predators avidly seek them. Here, a kit not long out of the nest secretes itself in dense cover along an open grassy area filled with succulent rabbit fare. This youngster must quickly learn the survival ropes; the mortality rate for cottontails is very high.

For whatever reason, the cottontail population seems to be flourishing this year. On last weekend's trip to Muskingum County, I must have seen nearly two dozen, mostly kits. I've also seen lots elsewhere, and have heard others comment on the abundance of rabbits in other areas of Ohio. 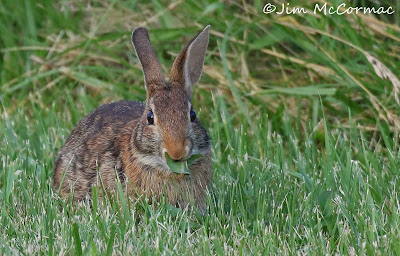 Our secretive little rabbit eventually worked up its courage to enter the open grassy expanse and snack on dandelion leaves. At one point, another kit rabbit joined it and they engaged in a bit of frisky sparring. Who knows, it may have been a prenuptial courtship display - some cottontails mate and produce young in their first summer. Since the average lifespan for one of these rabbits isn't much over a year, no sense in wasting time.

Eastern Cottontails, cute as they are, are an essential ingredient in the predatorial web. They are important fare for foxes, coyotes, bobcats, and larger owls, especially the Great Horned Owl. I would imagine all of these carnivores are enjoying lots of rabbit steak this summer. And that's a good thing, lest we be overrun with rabbits. Female cottontails, on average, have three or four litters a year, each of about five kits. That's 15-20 rabbits spawned per female in a year. Somewhere between 10-25% of those new does will raise their own litters within two or three months - most wait until the following spring. Take all of the predators out of the equation, and say a 15-acre piece of rabbit heaven supported 20 sexually mature does. Each raises 15 kits in a year (some especially fertile females can produce 35 annually!) - 300 new rabbits. Say 15 of those 300 are females that breed in their first summer, and they collectively spawn another 75 kits. In short order the bunny Eden is overrun with 375 new rabbits. And these numbers are probably conservative.