A positive note about flies

In my warm-season wanderings, I notice flies. Lots of flies, everywhere, in all sizes, shapes, and forms. Mostly doing interesting things, and more often than not, very valuable things.

Flies get a bad rap. Ask your average person what comes to mind when "fly" is mentioned, and it'll usually be some variation of "yuck". What a huge injustice to the massive order Diptera, which is estimated to include one million species. It is only a tiny thimbleful of fly species that cause the all-important Homo sapiens issues - the overwhelming majority are beautiful insects that play essential roles in ecosystems, and mostly go unnoticed.

As I've been working through photo edits from recent excursions, I came across a few fly photos that show a trio of examples of fly coolness and value. 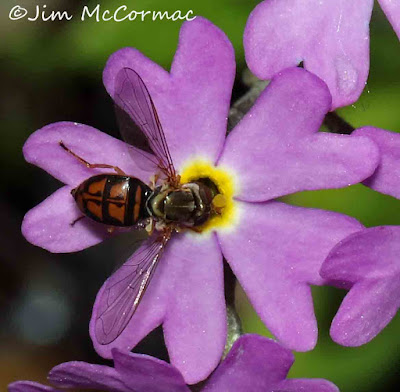 One of the most beautiful wildflowers of the North Country is Bird's-eye Primrose, Primula mistassinica. It grows in profusion on cold, gravelly shores of lakes Huron and Michigan at the northern tip of Michigan's Lower Peninsula, where I've been going annually for the past seven years.

The flowers of this diminutive species are irresistible photo subjects, and when I came across a drift of especially colorful specimens in Wilderness State Park last week, I naturally started in with the camera. It wasn't long before I noticed this tiny flowerfly in the family Syrphidae plunging into the pollen-laden depths of the flowers. A great many of our wildflowers depend upon insects to move pollen from plant to plant, and scores of species of flies play a major role in pollination. 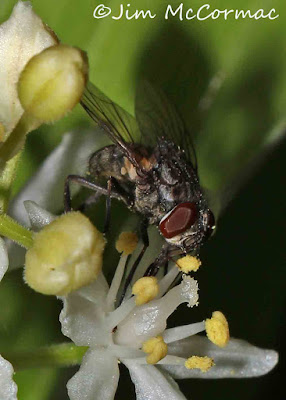 Here's proof of fly pollination. This species, which resembles the common housefly but is decidedly not (although I do not know the species), is caught red-handed (or eyed) as it services another native wildflower, the Starry False Solomon's-seal, Maianthemum stellatum. This photo was made shortly after the one above it. The fly appears to be eating pollen from the anthers. Some of that pollen will adhere to the fly's body, and eventually be rubbed across the whitish bottle-shaped process in in the flower's center, which is capped by the stigma. Thus pollinating the plant. This fly and others of its ilk methodically brushed their way through many of these flowers, and certainly they play some role in the lily's pollination. 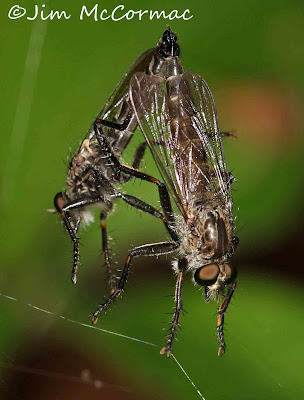 I made this image last Saturday in Shawnee State Forest in southern Ohio, and it shows the toughness of our big predatory robberflies. I was kneeling on a dry embankment along a remote forest road, photographing a very cool plant known as goat's-rue, Tephrosia virginiana. Suddenly I heard the buzz of loud wings, and this pair of medium-sized robberflies (about an inch long) comes roaring in, mating on the wing (I'm unsure of the species). They ran headlong into the web of an orchard spider, and seemingly became ensnared. In this photo, the pair hangs suspended from the silken strands, but apparently still quite intent on their amorous coupling.

The spider, which was hanging in the web, made no move to approach the ferocious predatory flies. Finally, I moved in a bit too close, the flies stirred from their trance and easily broke free of the web, flying to a nearby leaf to continue on. Even a venomous arachnid caused no worries for the six-legged beasts. Woe to any creature their size or smaller than crosses paths with one of these flies when it's hungry. Or perhaps interrupts them in flagrante delicto.

Robberflies are the Peregrine Falcons of the fly world.