Some encounters with mammals 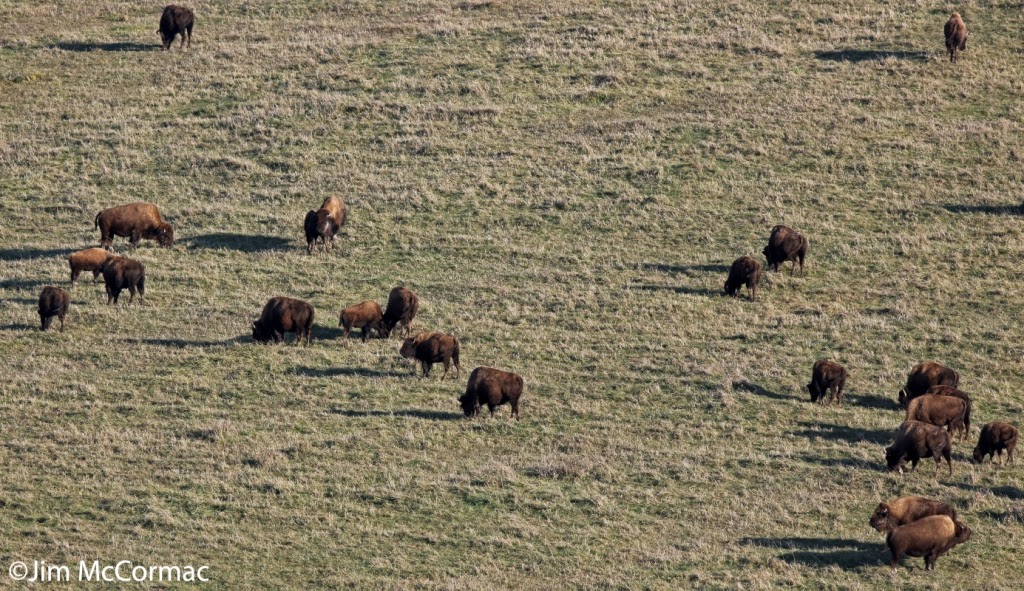 A herd of Bison grazes the vast grassy plains of the Wilds in Muskingum County, Ohio. Their captive herd seems to be expanding, and there were a number of bisonlets among the ranks, so reproduction must be going well. The scene offers a tiny snapshot of the days of yore, when countless thousands of Bison roamed the Great Plains.

Participate in the upcoming Chandlersville Christmas Bird Count on December 20, which covers the Wilds and surrounding areas, and you can marvel over the massive Bison, too. Details about the bird count are RIGHT HERE. 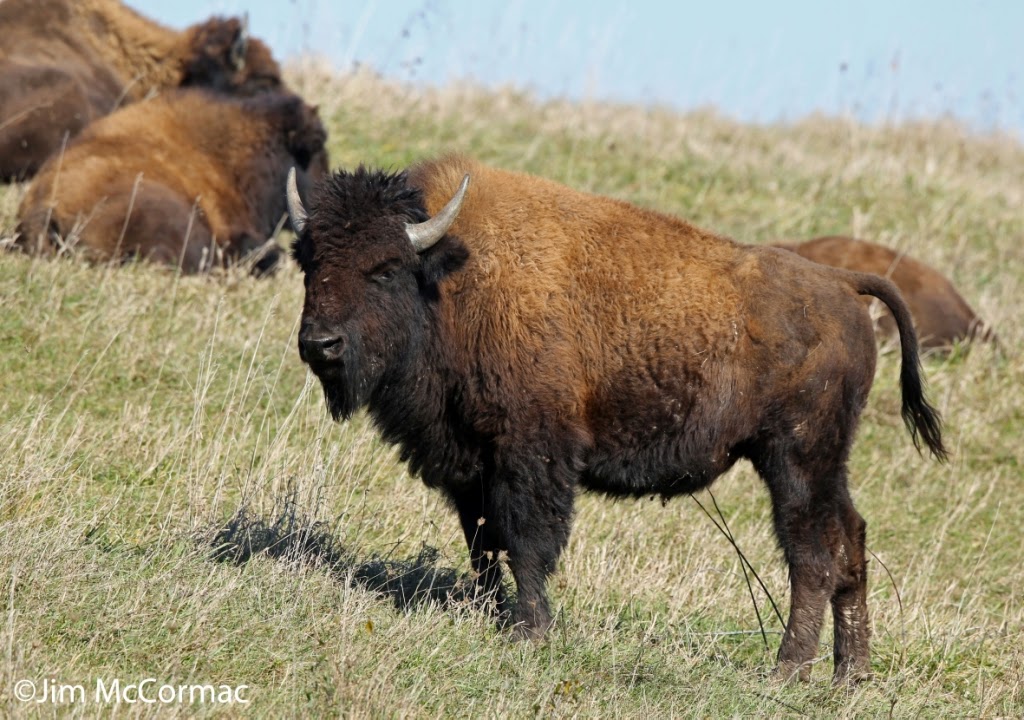 I have noticed that people have an inordinate interest in mammals, and most Homo sapiens will gawk at something like this huge Bison before casting their eyes to, say, a Winter Wren or Henslow's Sparrow. I think this tendency is hard-wired, as after all other mammals are closer to us on the evolutionary tree than other groups of organisms. Also, mammals - at least large ones - can mean one of two very important things: food, or danger. It is still in our nature to keep our eyes on them. 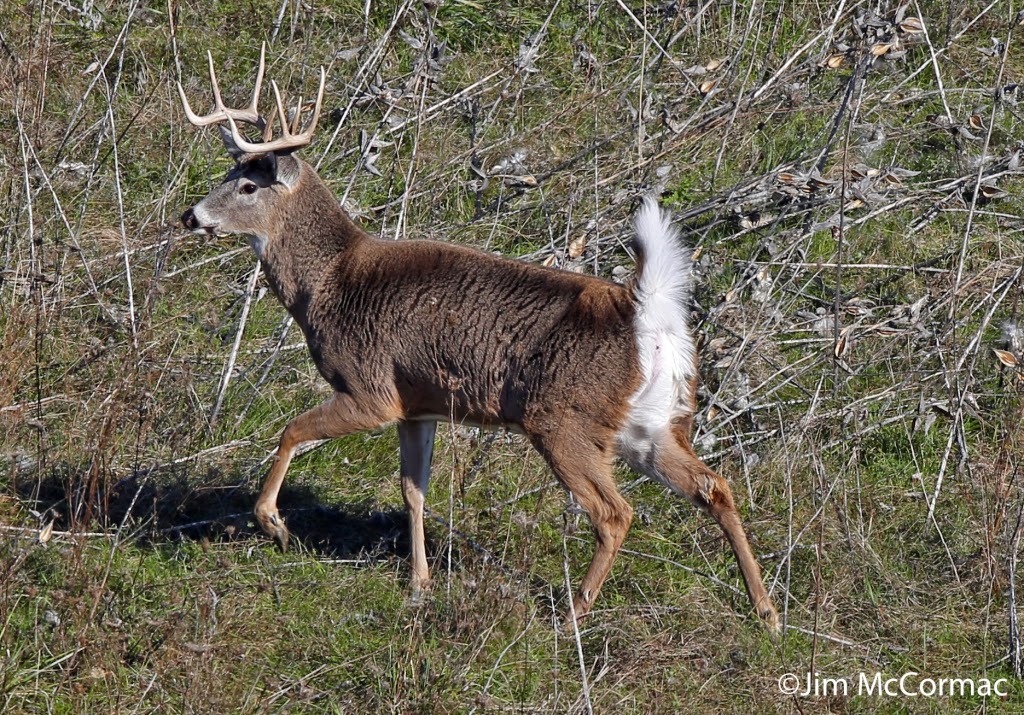 While we were watching those Bison from a distant perch, this proud eight-point buck White-tailed Deer was watching over his harem in another field. Suddenly a lesser buck appeared on the horizon, and this stud instantly went on alert. Notice how its fur is raised, much like an angry cat, and that snowy white flagtail is at full mast. 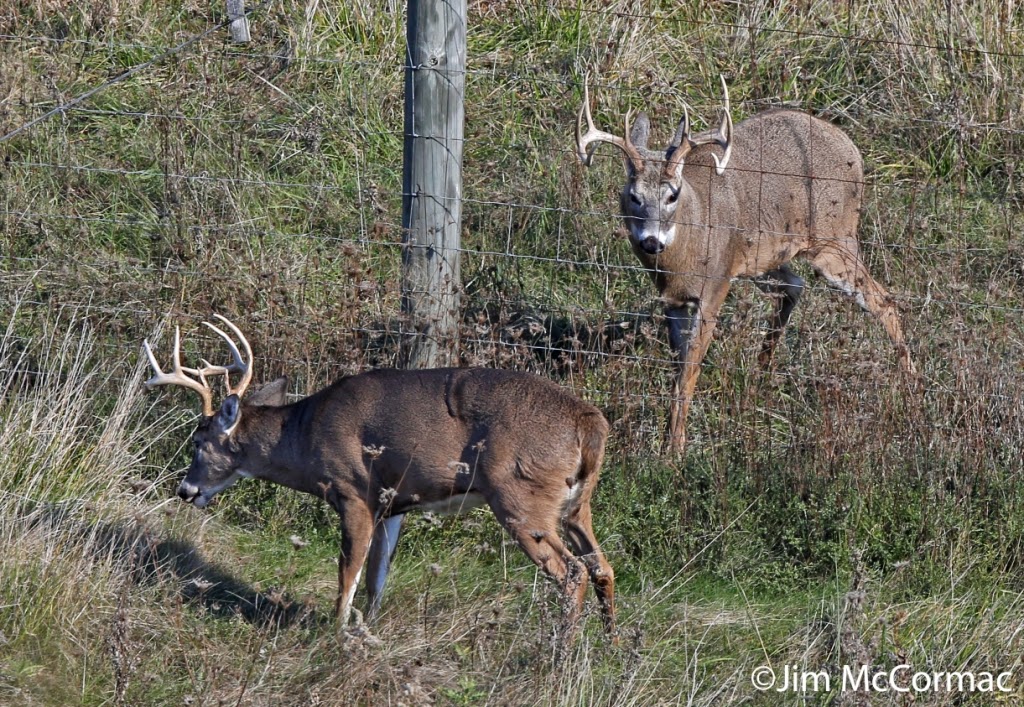 Apparently not intimidated by the larger buck's signs of aggression, the lesser buck (foreground) charged forth. But, Jr. Buck was chasing after a frisking doe, so perhaps he wasn't thinking too clearly. By the time it reached this fence, the bigger buck had also made its way to the fence, ready for an encounter. I was hoping one or the other would leap the fence and really mix it up, but that was not to be. Still, after a bit of snorting about they did ram antlers - HARD - right through the fence. The crack was clearly audible from our observation point some distance away. 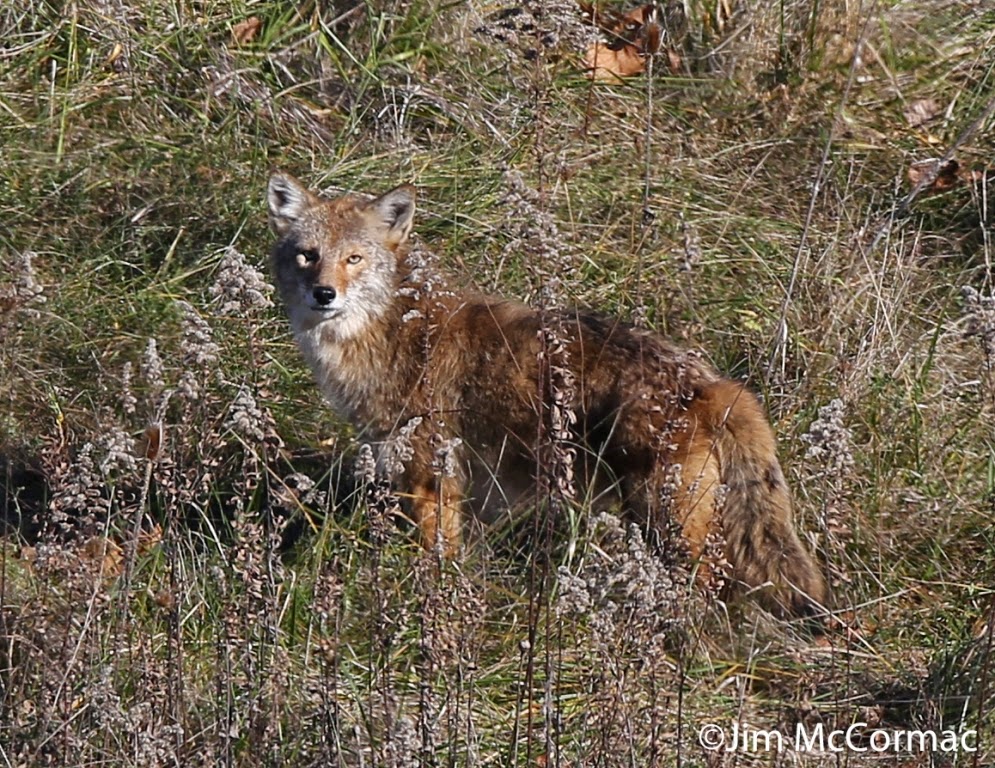 While the Cervidian standoff depicted above was taking place, this gorgeous Coyote trotted into view. I saw a furtive movement from the corner of my eye as the wily one briskly trotted through high vegetation down a hillside and towards the deer. It was rather far, and I didn't think it knew of our presence. As if to disprove that notion, it stopped and turned to gave me a baleful glare, letting me know that yes, it did indeed know that the dumb biped was watching.

The Coyote kept a direct course towards the younger buck, which was on its side of the fence. The deer quickly became aware of the interloper, and began moving off. I was hoping for some sort of strange encounter, and stood ready to photo-document it, but nothing doing. I suspect the 'yote was just passing through - can't imagine it would have taken on a deer that size, but the scene made for great wildlife watching. 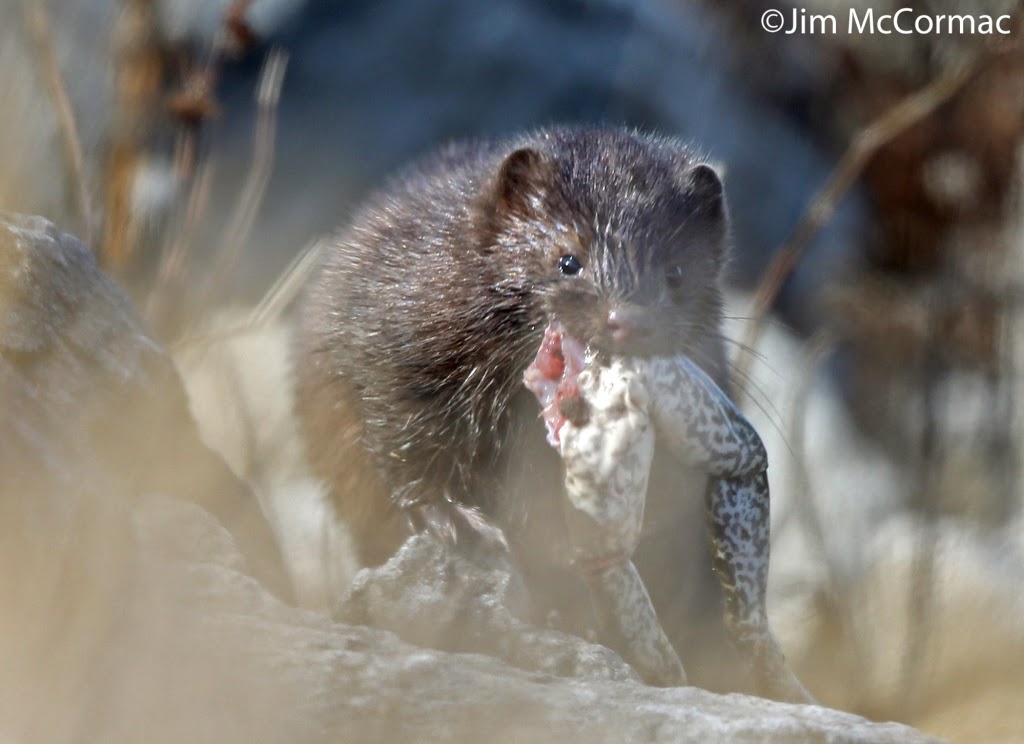 A Mink carries a giant half-eaten bullfrog. This one was a stroke of great luck. I was standing along a marsh at Killdeer Plains Wildlife Area in Wyandot County, photographing two Northern Shrikes mixing it up in a tall cottonwood tree. I had my camera mounted on a tripod, with the 500mm lens with 1.4 extender, making it a 700mm. Just as with that Coyote, a movement in the grasses caught my eye, and I looked over to see the Mink tearing across the dike.

Shrikes temporarily forgotten, I whirled the camera onto the Mink and began clicking away. It still apparently hadn't seen me and was loping right to my spot. Unfortunately, I was somewhat over-lensed given its close proximity, and only managed this one keeper shot. The mild haze in the foreground is due to some grass blades between me and it. The photo was shot at just about the same time that it saw me, and clicked into high gear. Like a supercharged furry slinky, it bounded into dense cattails never to be seen again.

My wife and I while paddling on Griggs Reservoir in Columbus have had the opportunity to see a number of Mink. Who would think, in the middle of the city.

What a fun watch. I'm glad you had your camera ready for the mink too. I saw this very scene one time. I had my camera in hand and stood dumbfounded watching the mink with a big ole bullfrog in it's chops as it crossed a road, stopped to look at me and then went on. I just watched.