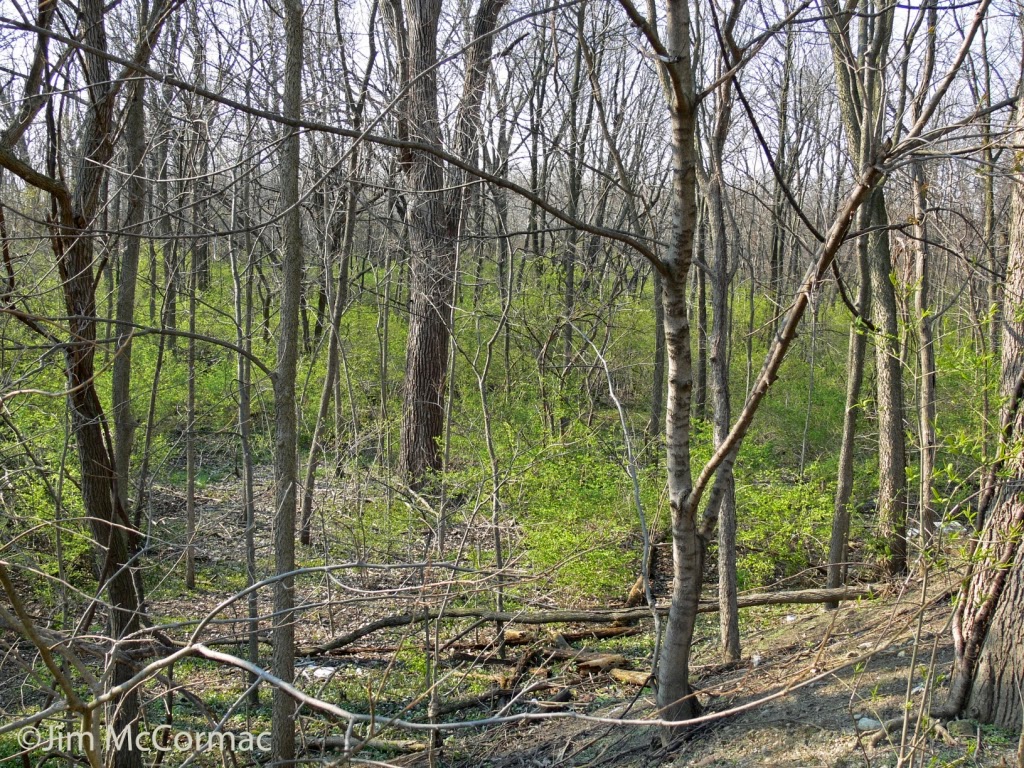 Amur honeysuckle, Lonicera maackii, cloaks the understory of an Ohio woodland. This plant, and a few other closely related species, would get my vote as worst invasive species of upland habitats. This post is meant only as a (mostly) pictorial offering of evidence as to how the honeysuckle gets scattered far and wide. If you would like to read in more detail about the evils of these shrubs, CLICK HERE. 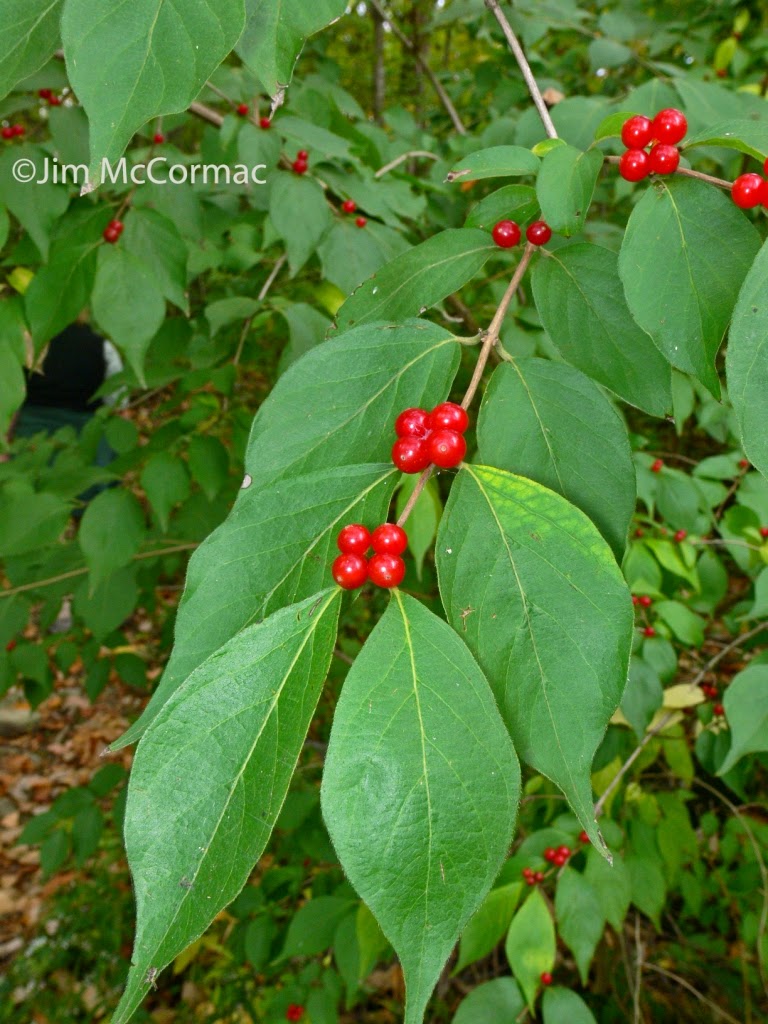 The first photo in this post was made in early spring, when the honeysuckle was just leafing out. Later would come (admittedly) very showy flowers. Pretty flowers and beautiful fruit are the main reasons that these shrubs were imported to the New World. What a mistake that was. Honeysuckle now runs rampant, and chokes out all manner of native species. 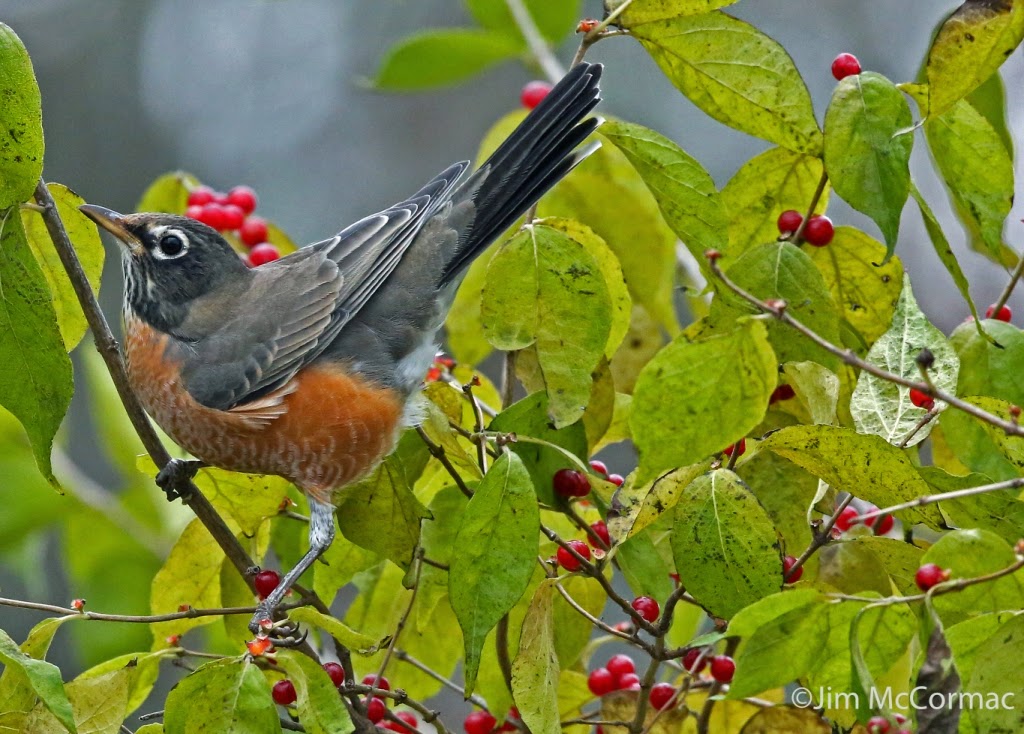 An American Robin perches jauntily in a sea of tasty berries. It, and many others, were plundering a small patch of Amur honeysuckle shrubs in Jasper-Pulaski Wildlife Area last Saturday. I was in Indiana to see and photograph the spectacular congregation of migrating Sandhill Cranes, and will soon post about that experience (once I get my myriad photos sorted). 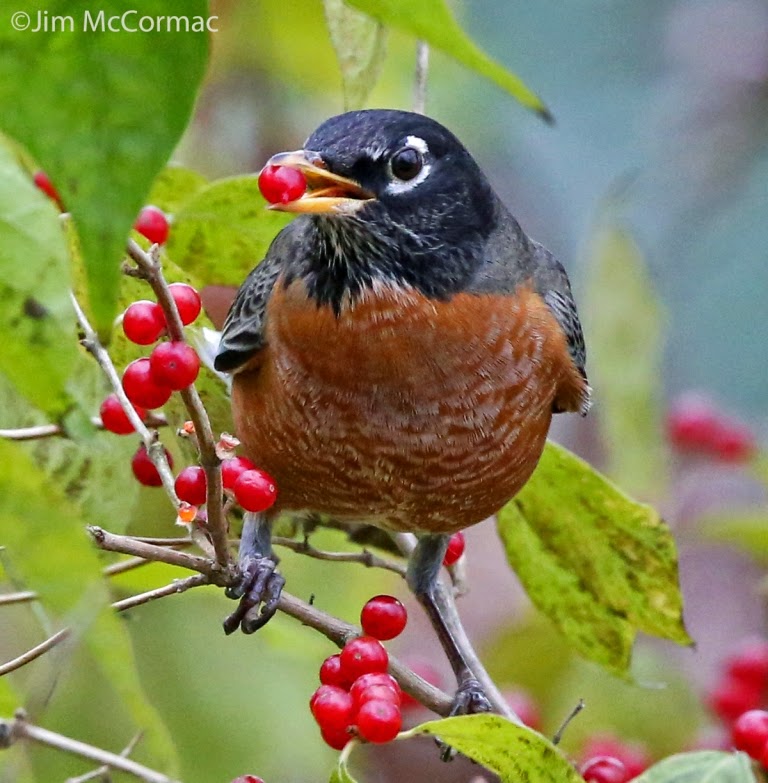 A robin, caught in the act. At least a dozen robins were raiding this shrub, and consuming several to a dozen berries with each foray. They and the other fruit-eating honeysuckle birds can strip a sizable shrub in a day or two. 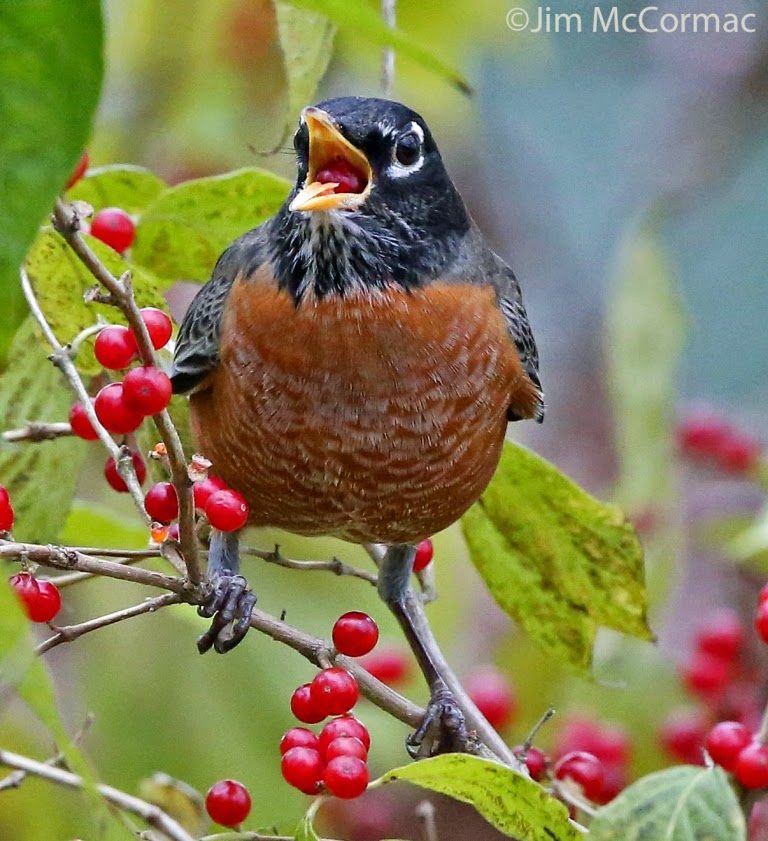 Down the hatch goes a honeysuckle berry. Shrubs that produce brightly colored berries are generally doing so to attract birds. The showy fruit is irresistible to robins and other frugivorous birds. While the soft pulp is quickly digested, the hard seeds within are much tougher to digest, and some of them will pass through the bird's digestive tract intact. They will be expelled later, quite likely some distance from the source shrub. This is one of many ways in which plants "migrate". 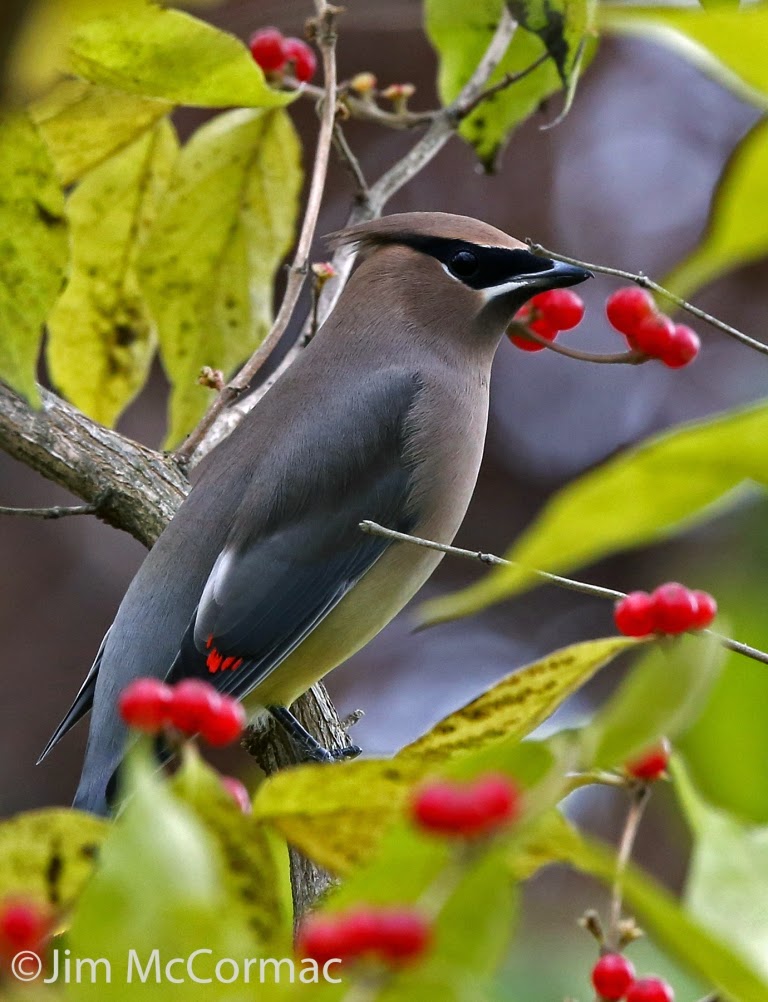 Were these the fruit of some native shrub, I would be much prouder of this photo. After all, it is a reasonably crisp shot of one of our most elegant birds, the Cedar Waxwing. But alas, the debonair chap sits among more of the nasty Amur honeysuckle. 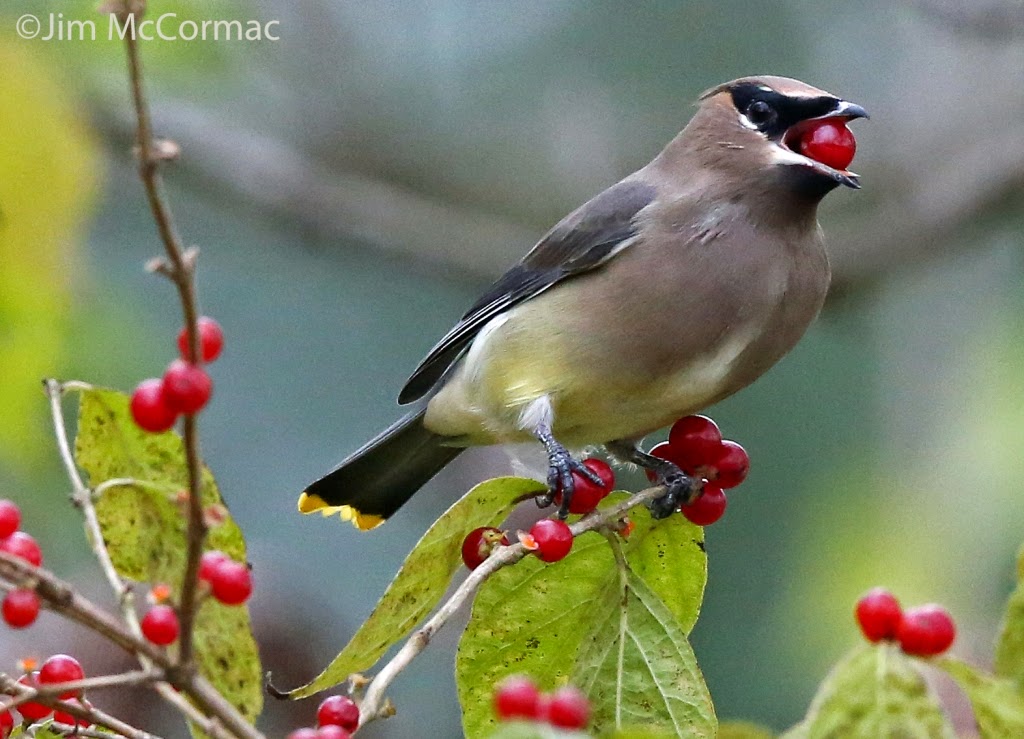 Like robins, waxings are huge fans of berries and a flock can intake great quantities in short order. 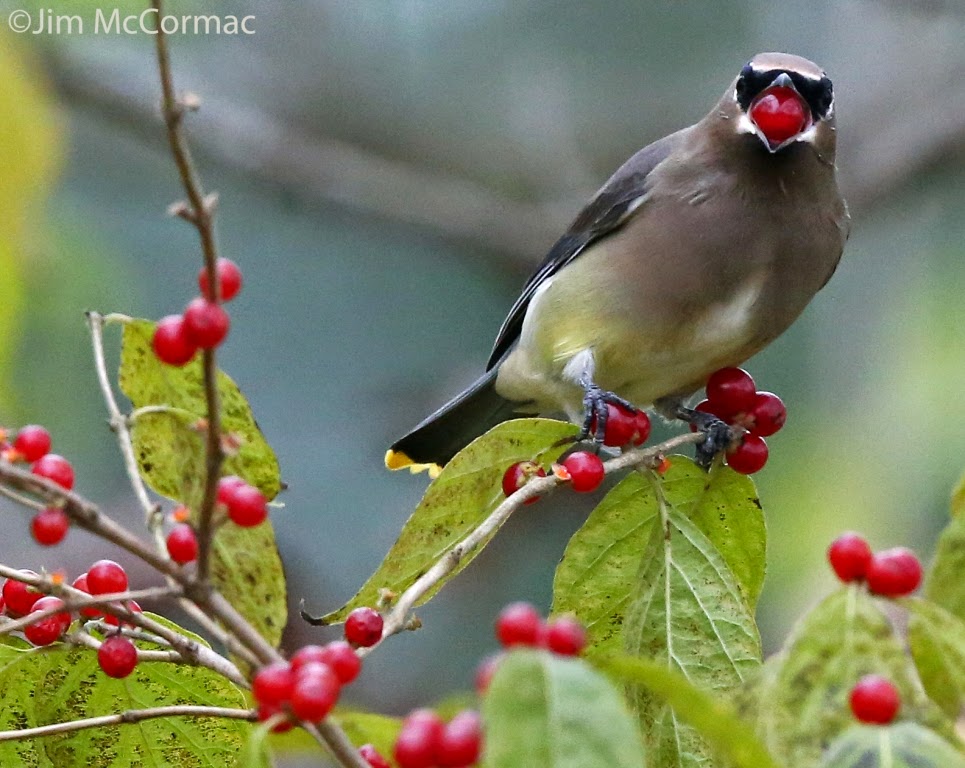 I would think that eating one of these berries, were you the size of a waxwing, would be akin to you or I eating a large melon. There were at least as many waxwings working over the honeysuckle as there were robins. In the relatively short period that I monitored their activities, the birds probably ate hundreds of berries.

When one considers the overall numbers of robins, waxwings, and other species of fruit-eating birds, it's small wonder that invasive berry bushes such as honeysuckles spread so prolifically.

I see a lot of this in Chestnut Ridge Metro Park near my home in Fairfield County. What are the Metro and State Park people doing about eradication of the Bush Honeysuckle? How can we help?

There is a lot of this plant all along the Canal and the river in the Cuyahoga Valley. And, there are swarms of robins and a lot of waxwings taking advantage of it now. I was just down at one of the visitor centers for a walk along the Canal in Valley View.

I do know that some volunteers tried to clear out some large patches of this plant near Station Road Bridge in Brecksville. The volunteers gathered what they could. They coordinated with the park service to haul it away. It was a lot of work.

I spoke with one of the volunteers who also leads bird walk in the area. He said they didn't expect to wipe it out. They just wanted to get rid of what they could. It did make a difference.