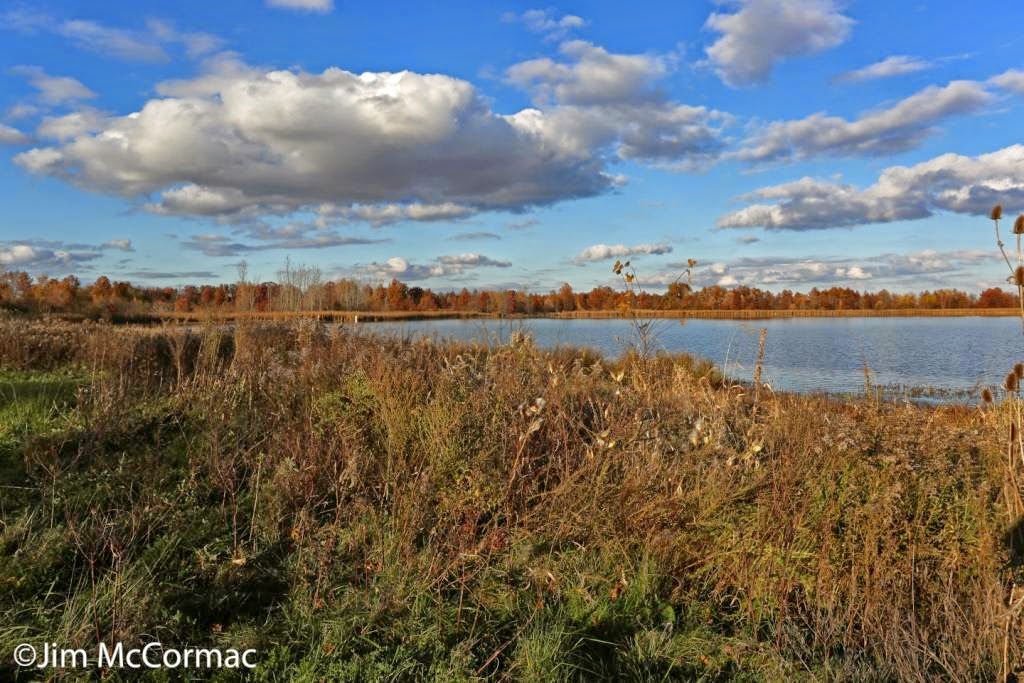 Big fluffy cumulus clouds drift across a blue prairie sky. This is one of my favorite places in Ohio, Killdeer Plains Wildlife Area in Wyandot County. I've been coming here since I had a driver's license (before, actually) and have made scores of trips to Killdeer over the years. It's only about an hour from my house, so if time is tight and I need a short trip, this is often my destination. Rare is the trip to Killdeer Plains that doesn't produce something exceptional, no matter the time of year. 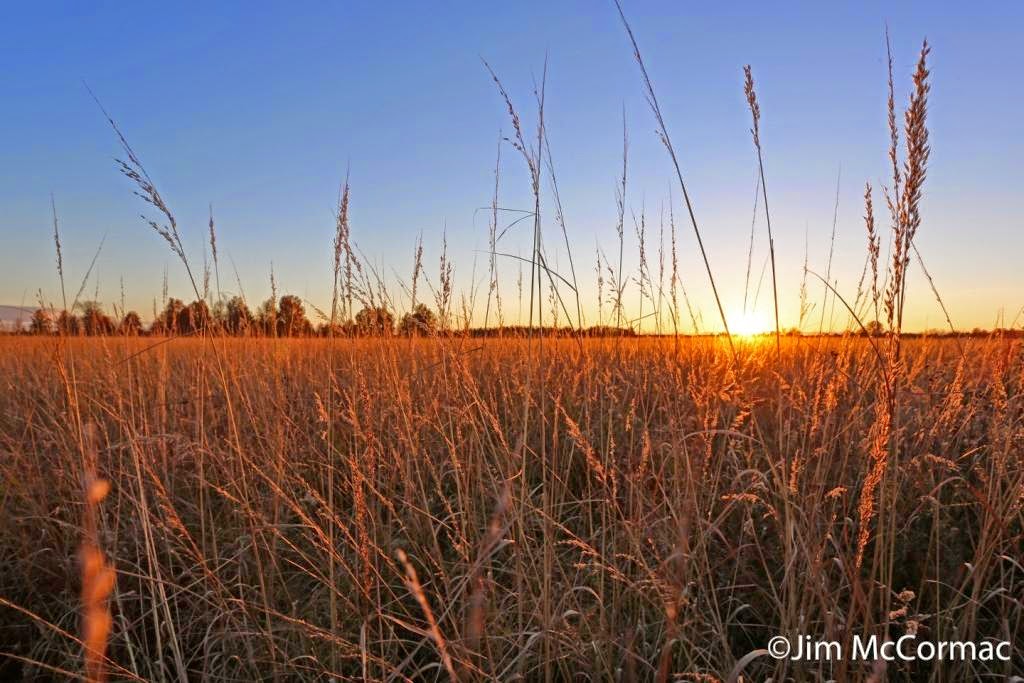 Tall prairie grasses lit golden by the sunset. Killdeer Plains is a 9,000+ acre remnant of the Sandusky Plains, which was a massive swath of prairie that blanketed parts of Crawford, Hardin, Marion, and Wyandot counties in north-central Ohio. Once John Deere devised a tool capable of busting the thick prairie sod, it didn't take people long to figure out that this was some of the richest soil to be found. In the relative blink of an eye, farmers transformed the staggering botanical diversity of the prairie into a vegetative triad: corn, soybeans, and wheat.

Probably over 99% of Ohio's original prairie, which may have once covered 1,500 square miles, has fallen to the plow or other development. That makes remnants such as Killdeer Plains all the more important. Birds, in particular, "remember" the prairies. It hasn't been that long since we pulled the habitat rug out from under their feet, and it seems that species that favor prairie habitats still are genetically encoded to use the former prairie areas as way stations, wintering grounds, and nesting areas. 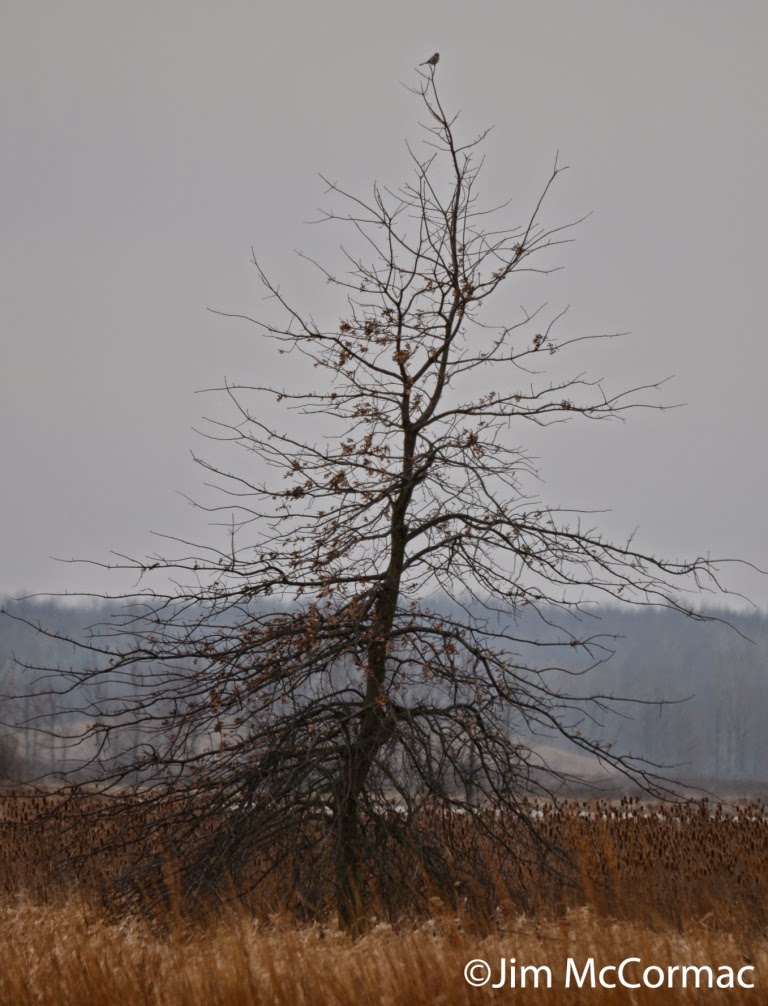 A messy, scraggly pin oak stands alone in one of Killdeer's prairie meadows. It is a great perch tree, and many a raptor has probably used it as a lookout. That's not a raptor teed up atop the tree in this photo, but it might as well be. To songbirds, small rodents, and in season, large insects, that silhouette is the grim reaper incarnate. A Northern Shrike. 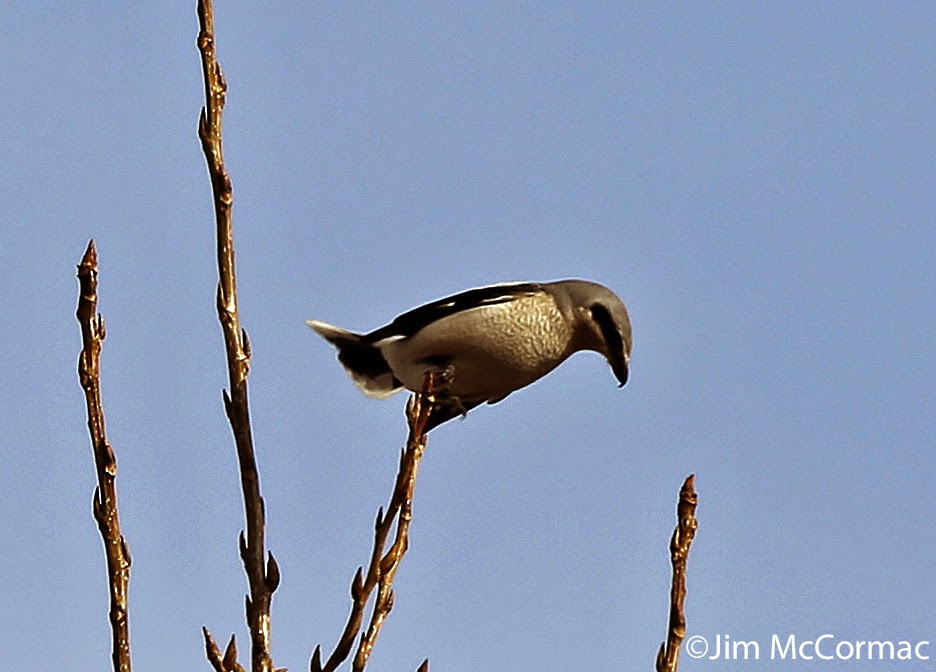 Killdeer Plains is a reliable spot to find shrikes in winter, and on a recent visit, I found a few. Two species of shrike occur in North America, and both turn up in Ohio. The southerly Loggerhead Shrike, Lanius ludovicianus, once was a fairly common and widespread breeder throughout the state. Its fortunes have waned, and Loggerheads are now quite rare here.

The shrike of the north is this species, the Northern Shrike, Lanius excubitor, which is an uncommon winter visitor, mostly in the tier of counties buffering Lake Erie. Scattered individuals turn up inland, with Killdeer Plains probably being the best such place to find them.

Loggerhead and Northern shrikes look similar, and can be tough to separate, especially if one does not have much comparative experience with the two. This photo shows two characters of the Northern Shrike: the underparts are faintly but noticeably barred, and the black bandido mask is broken or diminished on the forehead, over the bill. 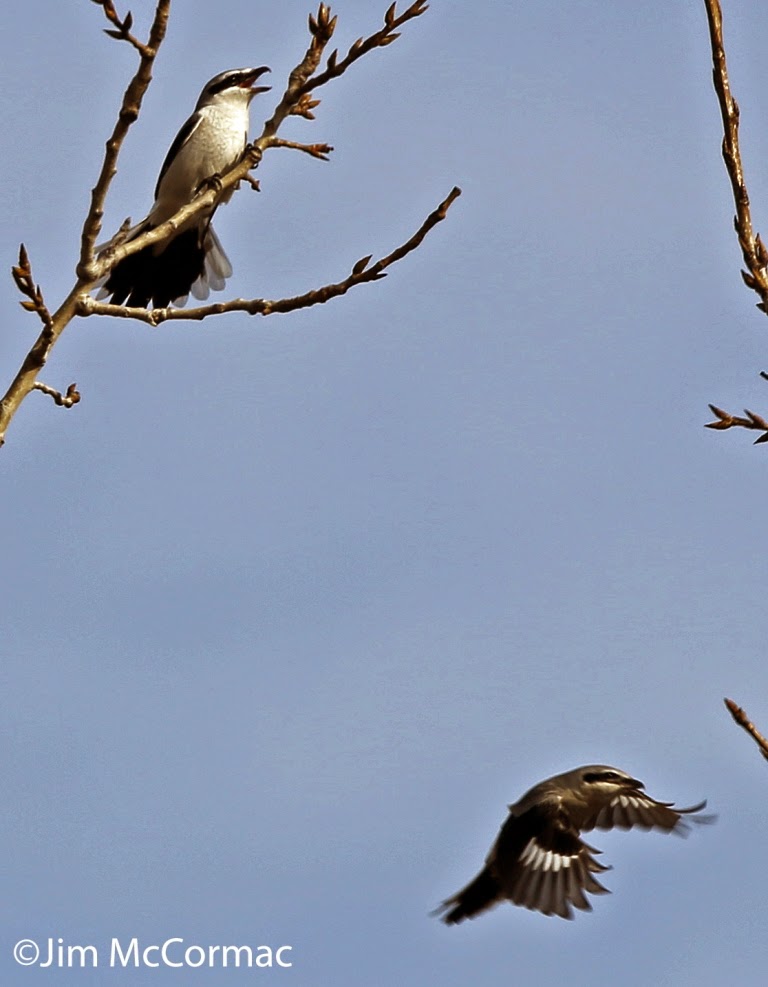 I was quite surprised to discover two shrikes, together, on my recent visit to Killdeer. These birds normally seem to be quite antisocial, excepting a breeding pair. I had apparently fortuitously stumbled into a border dispute. The two birds lunged, attacked, and scolded one another from the tops of tall cottonwood trees as they attempted to work out the edges of their territories.

When I returned to this area later in the day, one of the shrikes was conspicuous as it perched atop prominent trees, but the other was not to be seen. I suppose it was forced to move to a distant patch of turf. They're both probably still within the wildlife area, and likely will be until spring. 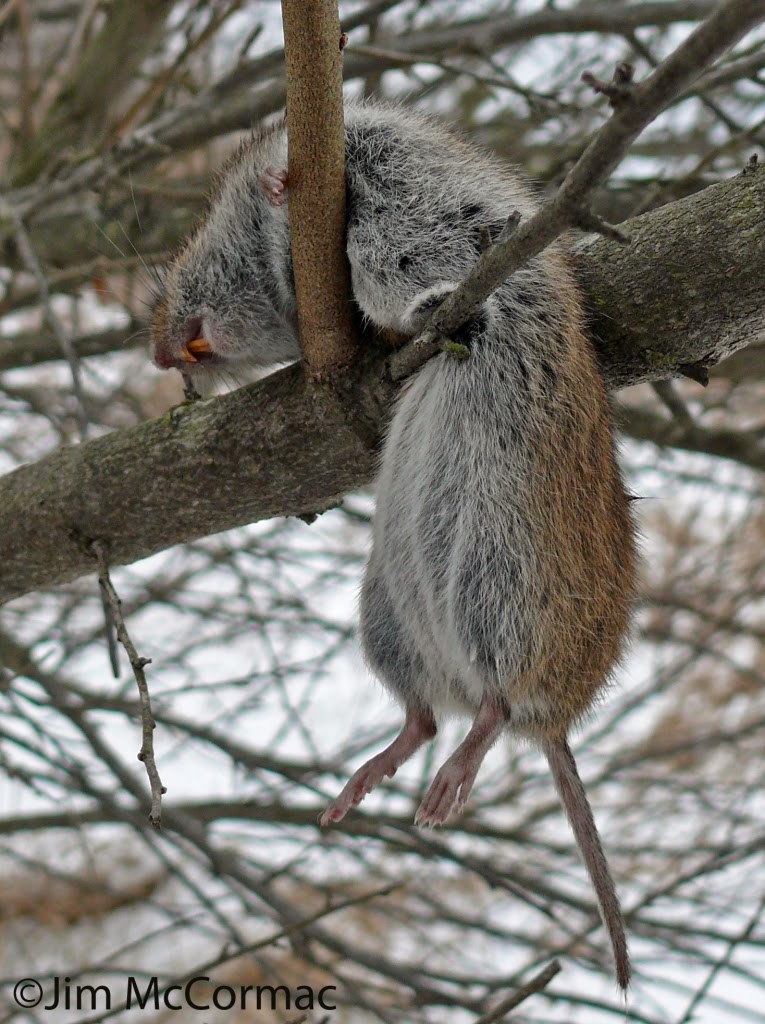 While there is an Australasian family of birds in the genus Cracticus that are officially known as butcherbirds, the shrikes are our "butcherbirds". They've earned the nickname. It is also reflected in the genus name Lanius, which means "a butcher". The shot above shows a meadow vole draped unceremoniously from a thorny tangle of autumn-olive branches. I was helping to lead a field trip at the Wilds a few years back, when we observed a Northern Shrike laboriously toting this hefty rodent into the shrubs. After it departed, we of course rushed over to see what had become of the vole. Its neck vertebrae had been snapped by the shrike's raptorlike bill, and later the shrike undoubtedly returned to tear the beast asunder as it hung from the branches as if suspended by a butcher's hook.

At least by human standards, shrikes are easily our most brutish songbirds. They are fierce indeed, and have been known to attack birds as large as a Blue Jay. It is always a treat to find a shrike, and they are interesting to observe. Killdeer Plains is obviously a good bet, and the Wilds generally has a shrike or two each winter. The Ohio Ornithological Society hosts their annual Birding at the Wilds event on January 17th. That's always fun, and might produce a shrike. Details will eventually be posted HERE.

Sounds like yet another great spot to add to my "to-do" list. I appreciate you highlighting different preserves, etc. It gives those of us from other areas a good idea of what there is to see and do in your state. Always nice to have a list when spring is slow to come up here (you guys are a full month ahead of us on the warm-up) and the "itch" to explore and see some nature strikes!!

You are really lucky to live so close to Killdeer Plains. I have heard it is a wonderful area for birds. I heard it is a great place for snakes, too.

Shrikes are really nice to find in the winter in Ohio. Three places I know of where they have been reported in the past: Frohring Meadows in Geauga County, the Jaite area in the Cuyahoga Valley National Park and Bath Nature Preserve in Bath, Ohio. I am going to check the eBird maps to see if any are around right now.