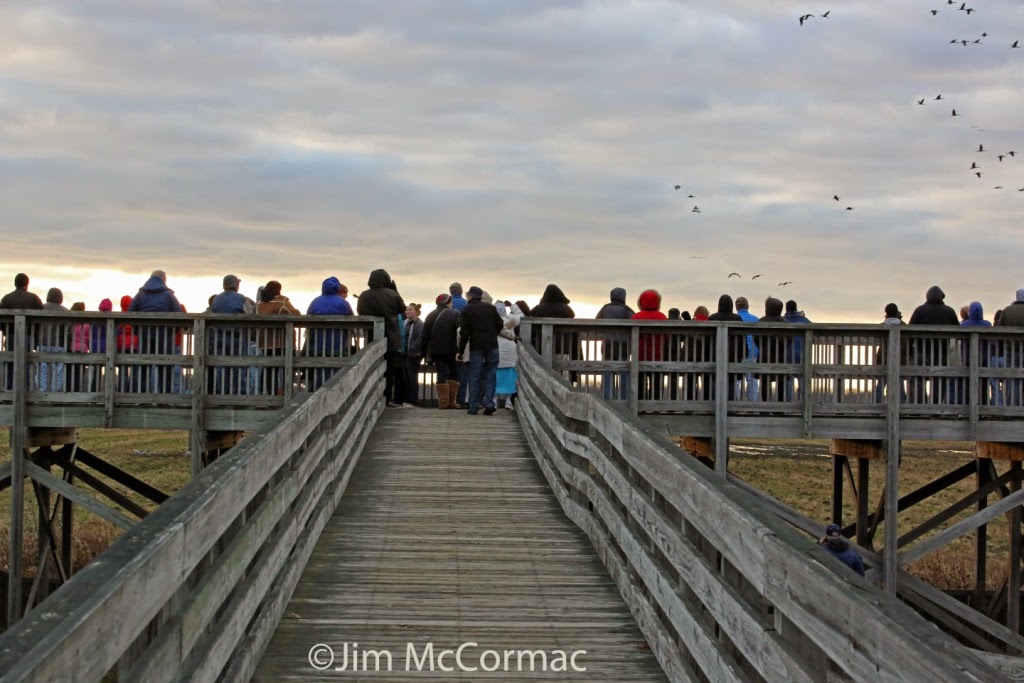 A gaggle of birders packs the viewing platform at Jasper-Pulaski Fish & Wildlife Area near Medaryville, Indiana. I made a whirlwind trip here last weekend, connecting with a friend from Chicago, Joyce Pontius. We were there, primarily, to observe the noisy and conspicuous spectacle of thousands of Sandhill Cranes on temporary hiatus from their southbound journeys.

I highly recommend this trip. From my town of Columbus, Ohio, it is only about a four hour drive, and the Chicagoans need only travel half that distance. Jasper-Pulaski is in easy driving range from much of the Midwest, and you'll meet people from all over the place who have traveled to see the cranes. 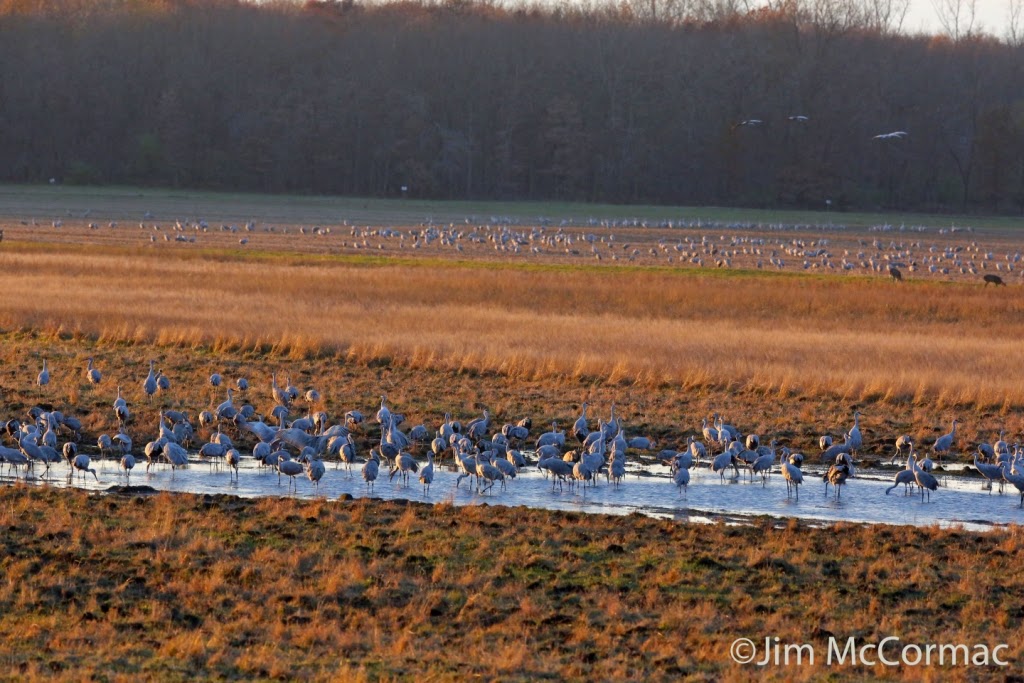 This is what the crowd on the deck is ogling - thousands of noisy Sandhill Cranes. The birds hit their peak numbers in November. Yesterday (November 12), about 8,000 cranes were present, and nearly that many were there last weekend when I made these images. There are probably more to come, although the frigid Arctic blast moving through may move some along, too.

The huge meadow overlooked by the main viewing platform is known as Goose Pasture. It serves as a social rendezvous point for the cranes, which spend the evenings in nearby marshes elsewhere on the 8,000+ acre wildlife area. Around sunrise, the cranes fly en masse to Goose Pasture and seemingly chat it up with each other. Shortly after sunrise, the birds begin streaming out to surrounding fields to spend the day foraging. 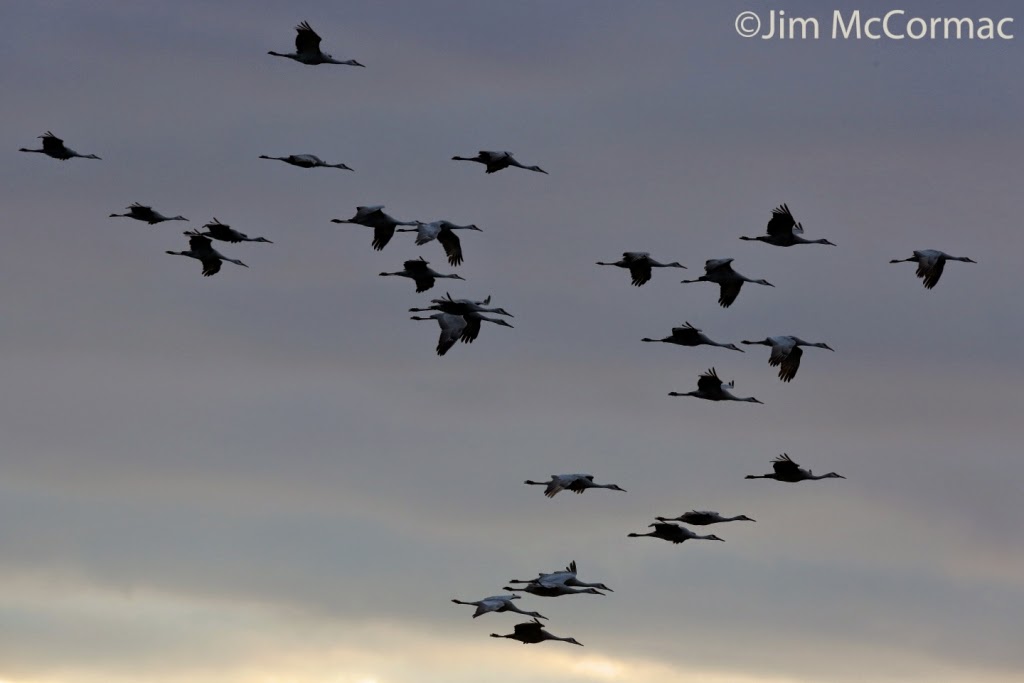 At rush hours, scores and scores of cranes are constantly overhead, and their loud primeval rattles fill the air. The overall effect is quite unforgettable.

A quartet of cranes glows golden in the sunset. One soon learns that light is everything when making certain types of photographs, and one also learns just as quickly that the sun and clouds cannot be manipulated at will. This shot was made in the sole 10-15 minute period in which the ever-present gray cloud cover moved aside and let the rays shine through. 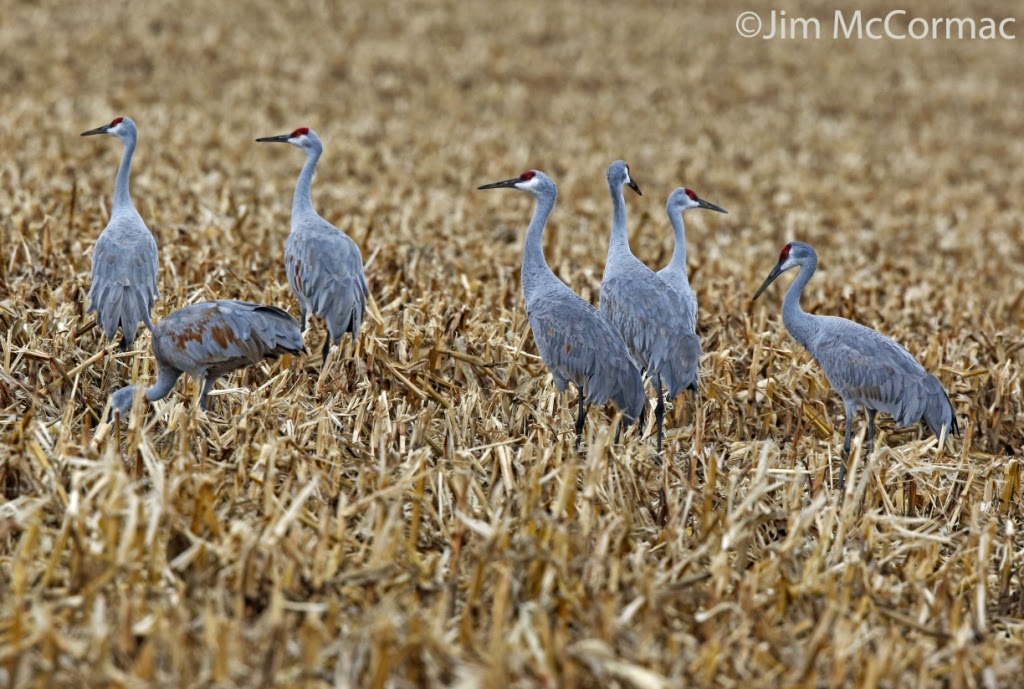 Dusk and dawn are the times to be at the viewing platform for the cranes' social hours. In between, trolling the local roads will produce scads of cranes feeding and resting in agricultural fields. Oftentimes the birds are quite near the road, and often will not flush or be unduly disturbed if the observers remain in their vehicle.

A Sandhill Crane is one big bird. It stands about four feet in height, has a wingspan of around seven feet, and can weigh eleven pounds. Over 1,500 Ruby-throated Hummingbirds would be required to match the mass of a crane. People that I suspect would never notice the lesser components of our fauna, such as pleasing fungus beetles or various sparrows, DO notice Sandhill Cranes. And many of them travel far distances to J-P to witness the crane spectacle and admire the feathered giants for hours on end. 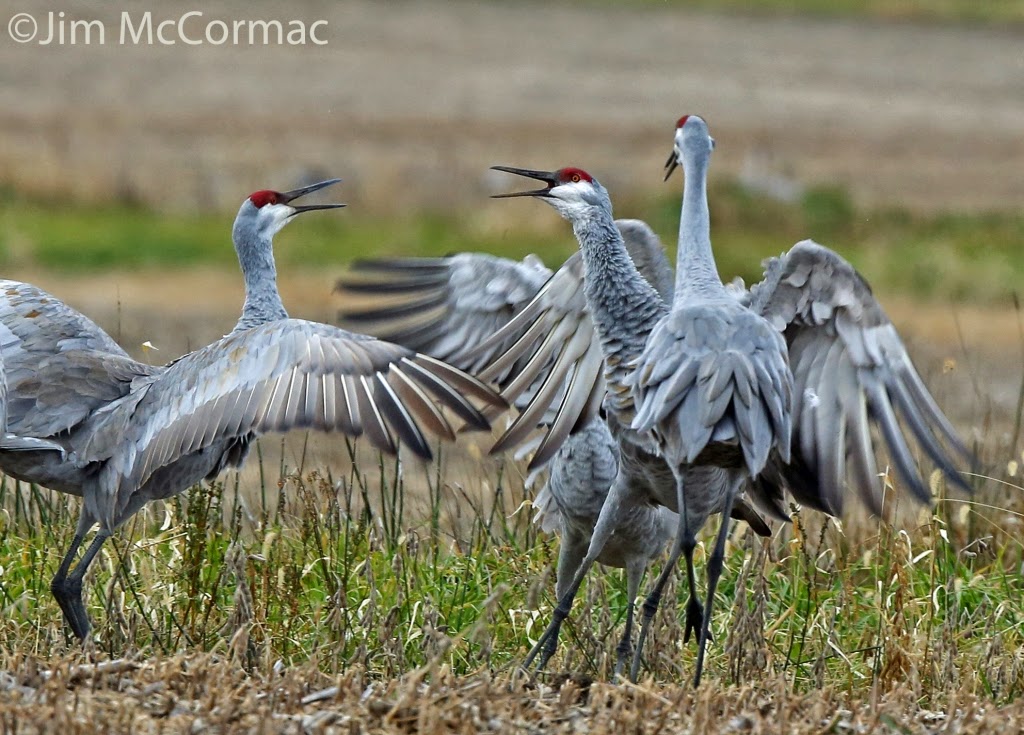 It is high entertainment to watch the highly social but selectively finicky cranes as they forage in groups. In this shot, an altercation appears to have broken out. Separating an agonistic encounter from courtship is sometimes tough, though. There are at least seven distinct displays which cranes use to express various degrees of displeasure, and some at least are at a casual glance not that different than the courtship displays. 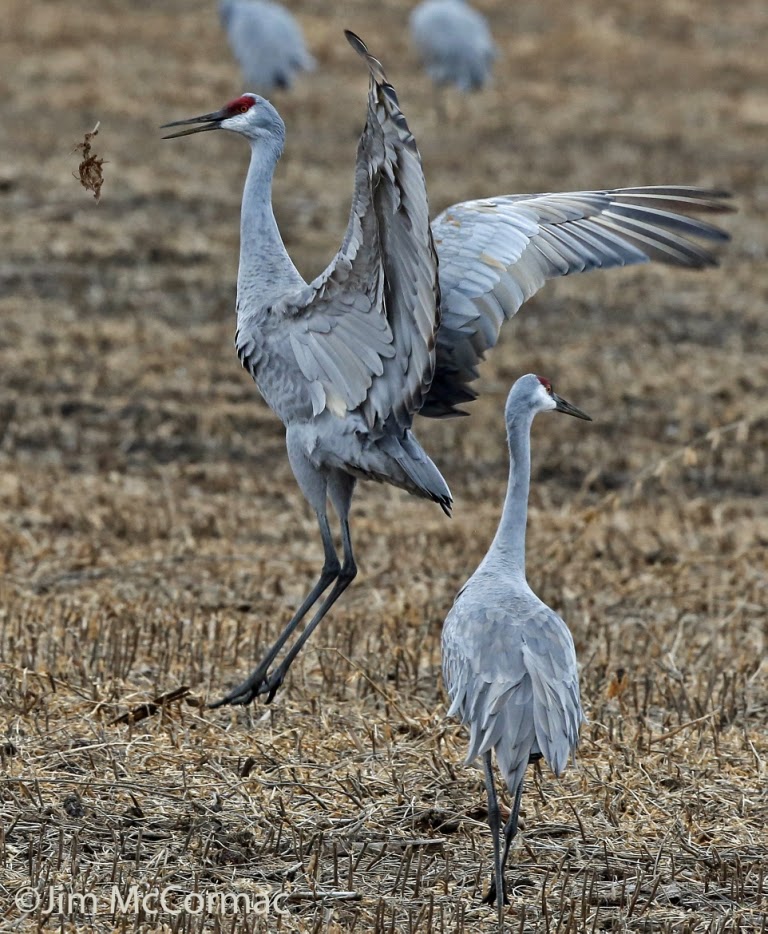 Now this is courtship! That blotch in the upper lefthand corner of the image, in front of the bird's bill, is not a smudge on my lens. The "dancing" bird, which has leapt high into the air, has tossed a piece of corn stubble skyward. This display is known as the "vertical toss", and it is usually performed by a male. Apparently it serves to get the attention of a female. Hang around and watch groups of cranes for any length of time, and you're bound to witness all manner of interesting social interactions such as this. 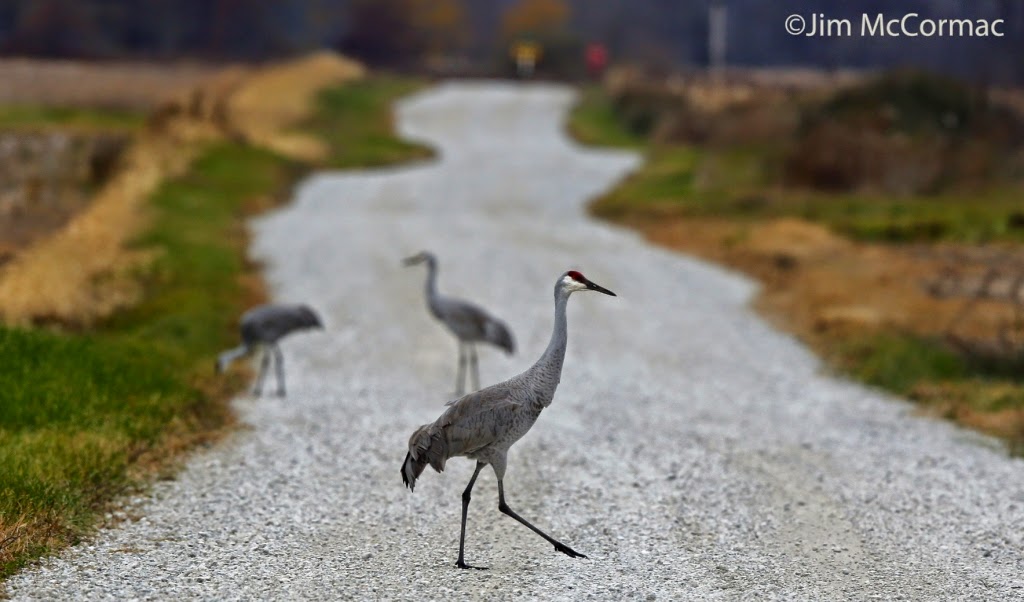 Cranes rule in this neck of the Hoosier state. They even get the right-of-way when crossing roads. 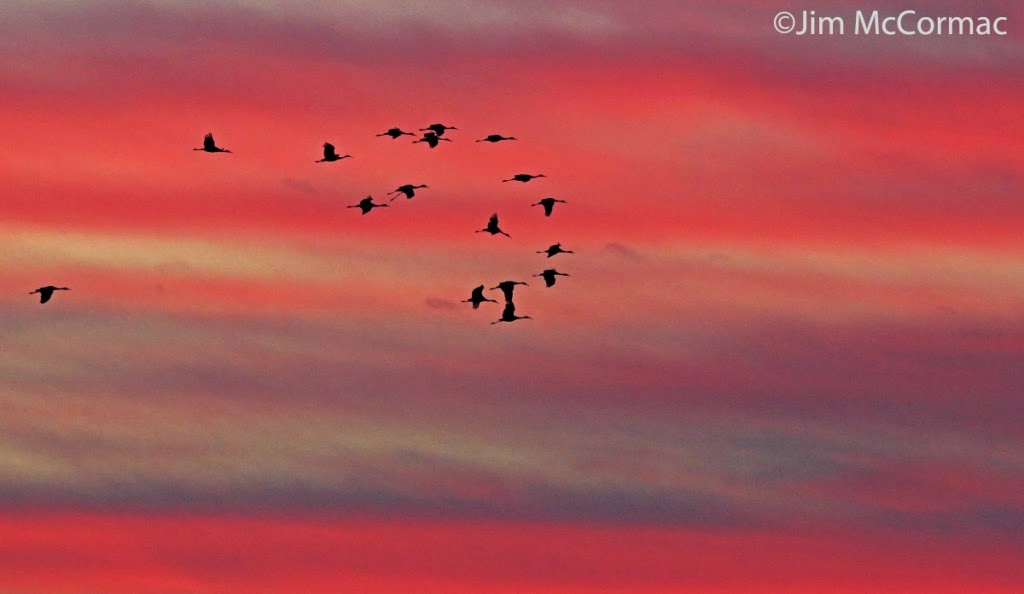 A platoon of cranes punctuates a picture-perfect Indiana sunset. They joined thousands of other cranes in Goose Pasture for the evening ritual. At flocking times, Sandhill Cranes absolutely dominate the environment. Cranes are everywhere, and their guttural rolling calls fill the air. Impressive hardly describes it. If you go, don't leave the platform when the sun finally dips behind the horizon. About a half-hour or so after nightfall, the flocks' collective calls will begin to rise in pitch, and their restlessness becomes palpable. Suddenly, with a mighty wall of sound, the birds take wing and journey back to the icy waters of the marshes where they'll spend the night.

This wasn't my first time at the Jasper-Pulaski crane dance, and as before the trip came to a close all too soon, and it was time to get back to my world.

If you get the chance, you simply MUST go to Kearney, NE in March --the numbers of cranes there are staggering--numbering in the range of 400-500 THOUSAND. Add to that snow geese numbers that can hit 2 MILLION and you can imagine the spectacle. I hit it most years--usually mid-March. Awesome. Truly one of nature's finest shows.
Rowe Sanctuary in Gibbon, NE rents blind spots on the Platte River. You go out before dawn. I had NO IDEA that there could be that many birds--it was literally shoulder to shoulder. And the noise!! WoW!!!
Sounds truly geeky, but I literally cried when I saw them rise up to go feed in nearby fields. Powerful stuff. I think if everyone would be required to witness something like that, wildlife protection would be more forthcoming.
End
Of
Novel.
(Can you tell this post hit the mark?)

Your photos brought back wonderful memories for me! When I visited some years ago it was drrizzly and cold but that did not matter at all once the Sandhill Cranes started to arrive. The sight and sound will be with me forever.

Thanks for your comments, Sue and Carol, and Nebraska is on the list of trips to come, Sue - thanks for the reminder!

It's been years since I was there, and your narrative and photos bring the beauty and especially the sounds of this ancient music right back to me. Thanks for this beautiful post.