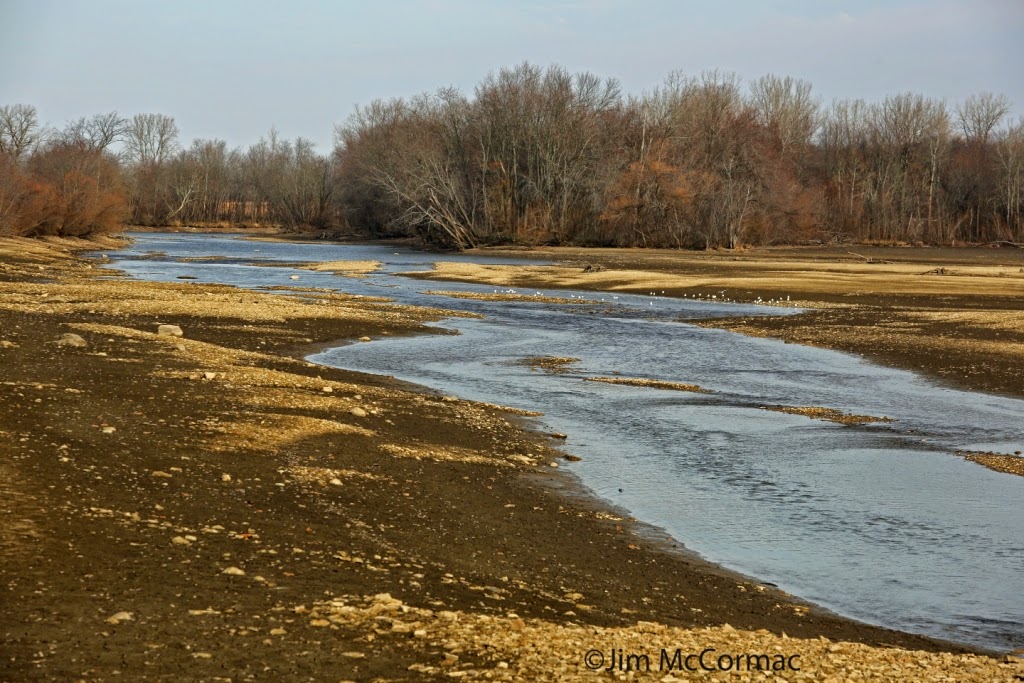 The upper end of Deer Creek Reservoir in Fayette County, Ohio, where beautiful little Deer Creek begins to become impounded by the big dam some distance to the south. Bob Royse found a Black-legged Kittiwake here on November 26, and the wayward gull is still sticking. I was finally able to run down there this morning and ogle the animal. The light never was great - the end of the day would be a much better time to shoot images from this spot - but I did what I could to record the rarity. But mostly I just watched the highly entertaining bird, for nearly three hours. 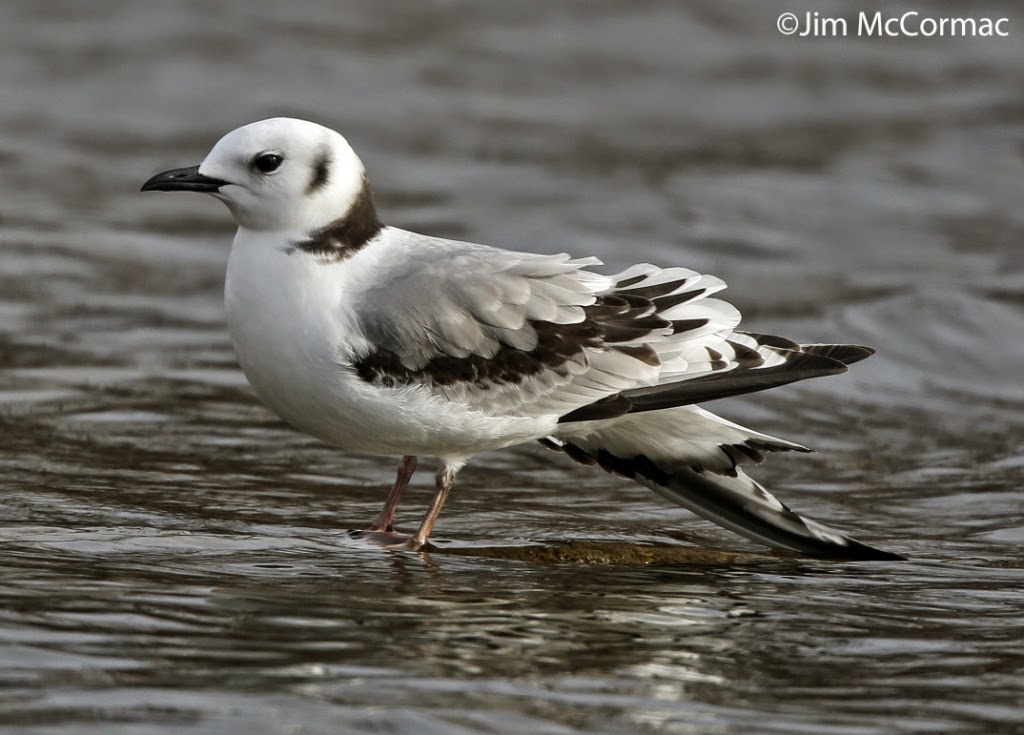 It took all of a nanosecond to find the kittiwake, seen here stretching its wing. Bob's directions and description of the scenario were spot on. The bird is fixated on a spot where a seldom-used park road comes very near the creek, and access could not be easier. I saw the bird from my car, pulled over, and set up shop. The kittiwake cared not a whit for my presence, nor that of the other birders that stopped in during the morning.

As are nearly all Ohio records of Black-legged Kittiwake, this individual is a first-year (first-cycle for some of you) bird, born this summer somewhere in the far north. Young kittiwakes are more striking and conspicuous, and easier to identify, than are the adults. 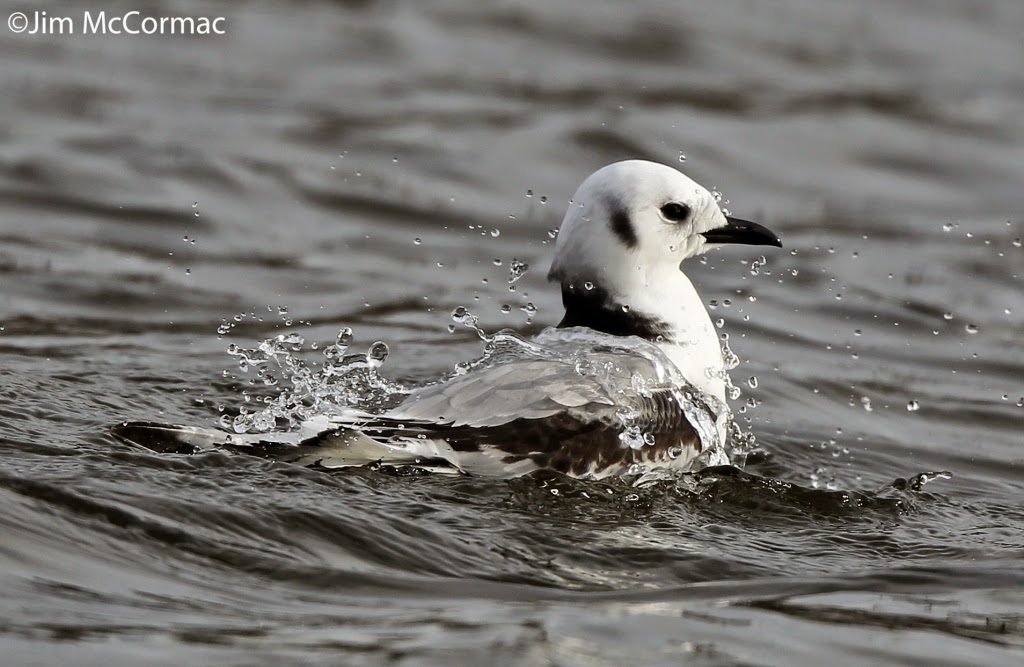 The kittiwake takes a bath. I always marvel over the cold hardiness of birds such as this. It was below freezing upon my arrival, and that water is frigid indeed. The gulls are unfazed.

Black-legged Kittiwakes breed in the far north, from about the latitude of southern Alaska to points north. They are normally birds of the oceans, breeding along sea cliffs and wintering at sea. Small numbers, nearly all juveniles, do make "wrong turns" and end up inland, as this bird did. A smattering of the population migrates through the Great Lakes, and most of our kittiwake records come from Lake Erie. Birds well inland from our Great Lake are rare indeed, hence the exceptional nature of Bob Royse's find. 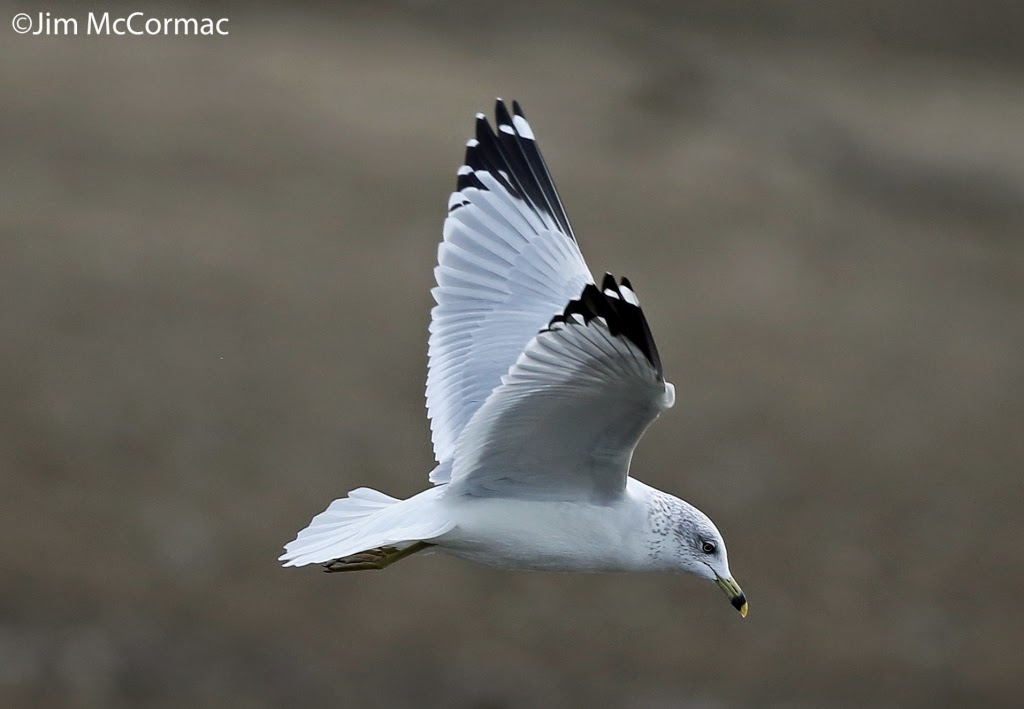 Several dozen Ring-billed Gulls, like this beautiful adult, were also in the area. Every now and then, the flock of ring-bills would barnstorm upstream to where the loner kittiwake hung out, and commence a feeding frenzy. Apparently there were occasional schools of small fish that were coming to the surface, and the gulls would begin dive-bombing the water. Their entry smacks could be heard some distance away. The activity would stir the kittiwake to action, and in short order it would capture four or five fish. I would love to know what the plentiful piscine prey is, but try as I might, I could never get a good image of one of the birds with its fish. From what I could tell, they are probably one of the larger shiners, perhaps spotfin shiner. 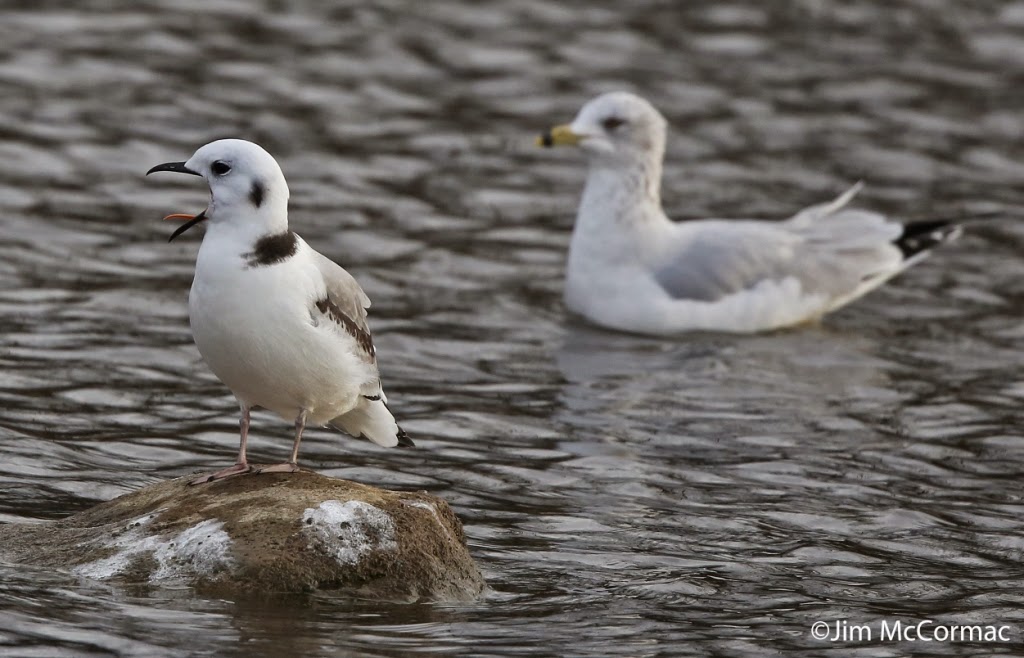 The kittiwake did not much care for the Ring-billed Gulls, and generally kept its distance. As kittiwakes breed far to the north of the range of the much more southerly Ring-billed Gull, these may have been the first of their kind that the young kittiwake had interacted with. 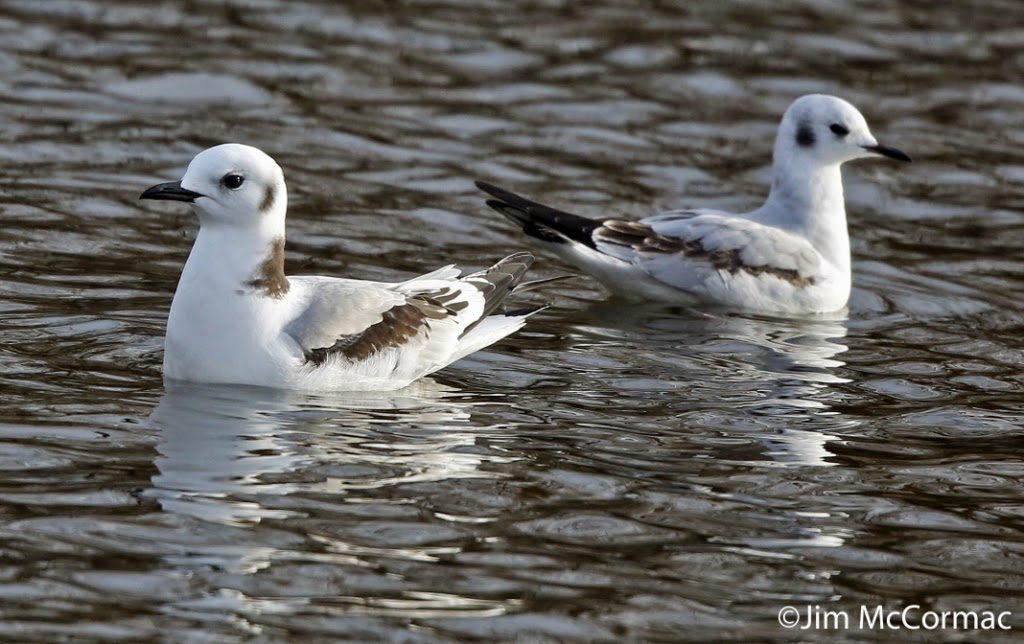 Our protagonist was somewhat more hospitable to this smaller Bonaparte's Gull (on right). The Bonaparte's seemed to want to hang with the kittiwake, but we noticed that its efforts to perch atop the same rock as the kittiwake were soundly rebuffed. 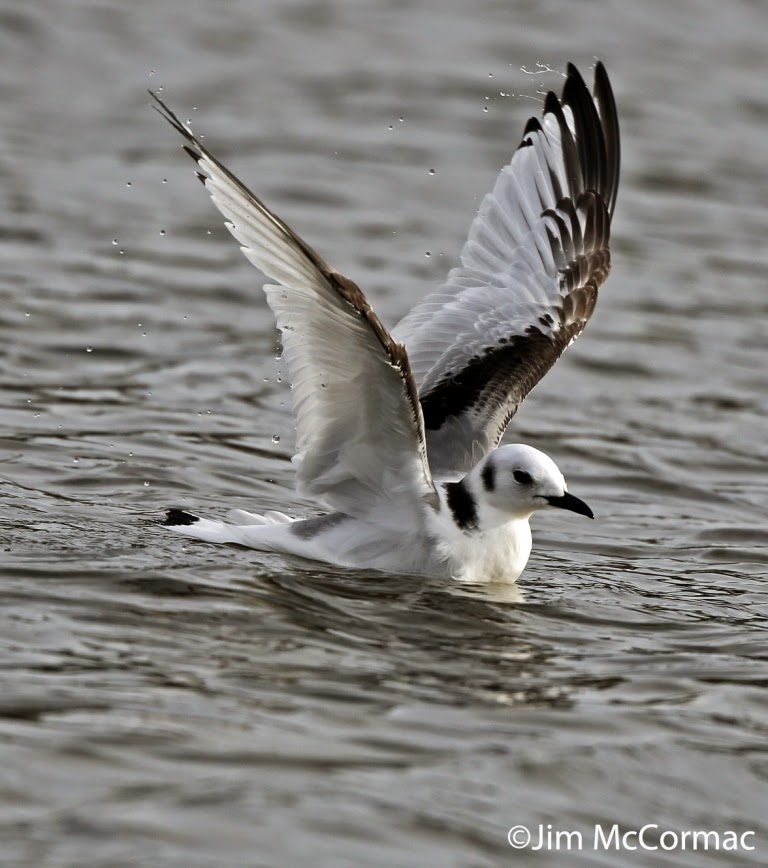 A young kittiwake is highly ornamented with black markings. Although you may throw your hands up at gull identification, as do many birders, there should be little problem in identifying one of these distinctive beasts. 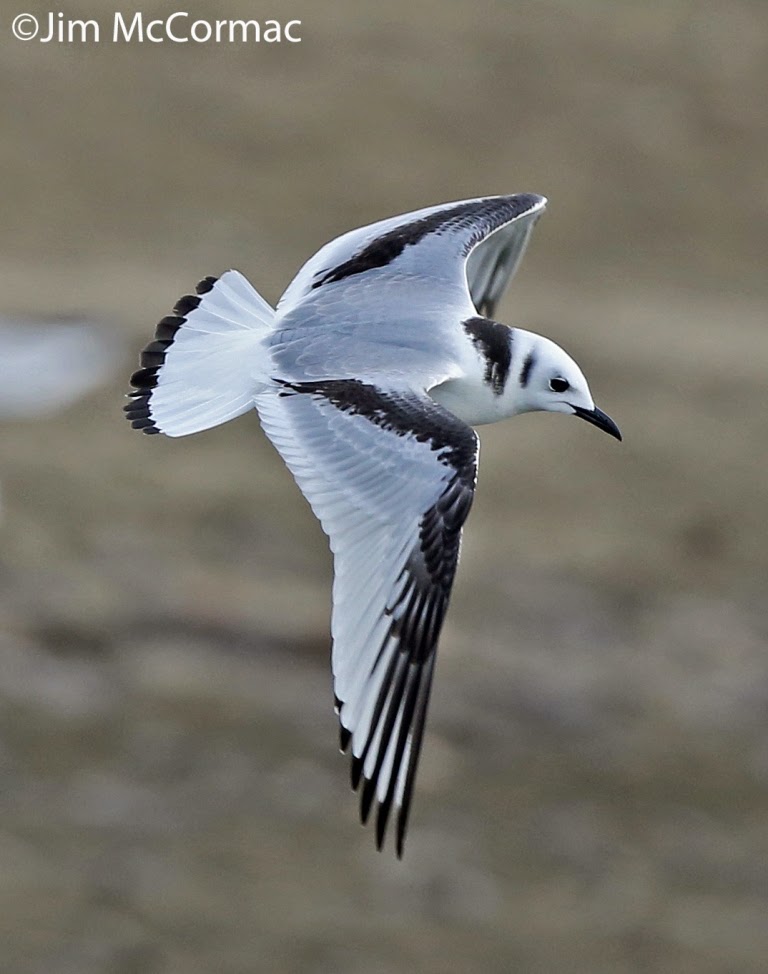 In flight young kittiwakes show a bold black M, or perhaps W, pattern on the upper wings. The big smudgy-black collar and dark tail tip bookend the wing pattern, and create a showy pattern that causes a kittiwake to pop from the crowd of gulls. 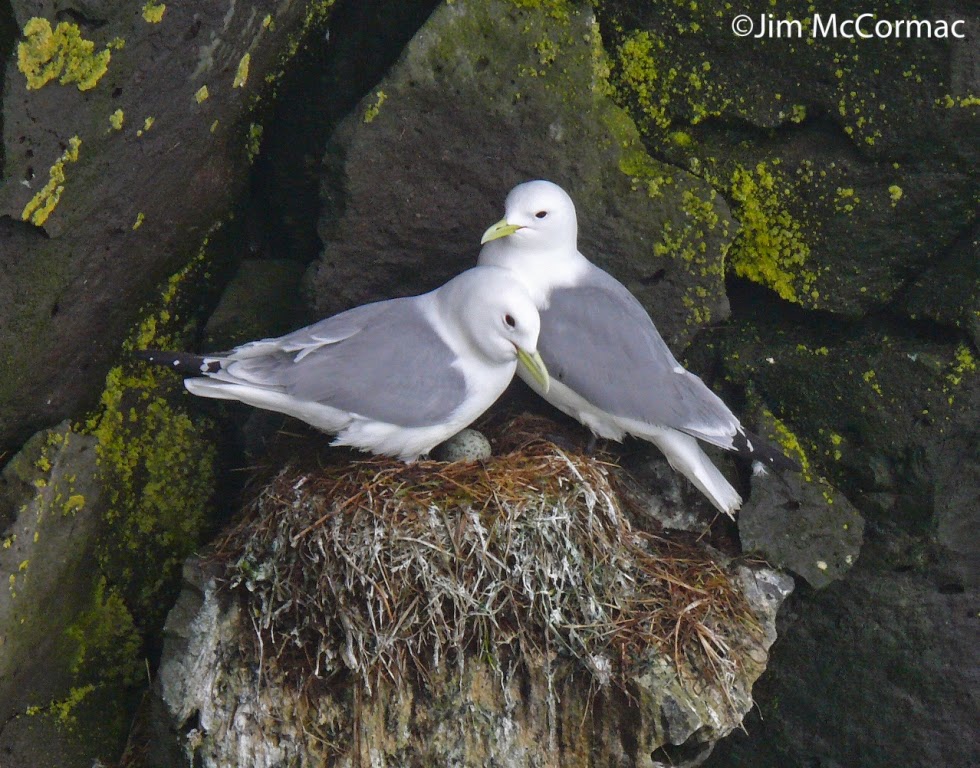 I made this image back in 2010, on St. Paul Island in the Bering Sea far off Alaska's coast. The clean gray and white adult Black-legged Kittiwakes construct a large fancy nest made primarily of mosses plucked from the tundra. There cannot be many other gull species whose young are raised in such luxury.

It would be very interesting to know where the Deer Creek kittiwake originated. To be sure, it was spawned in a situation similar to the photo above, quite possibly along the Arctic Ocean of eastern Canada. Our rare visitor has probably traveled at least 1,500 miles from the north to thrill birders here in central Ohio.

Greetings from Dubai! Really enjoyed going through your blog. Have a great week ahead! Will be back soon...

Amazing blog and a beautiful post! Thank you for sharing your knowledge about nature. :)
Greetings from Croatia!