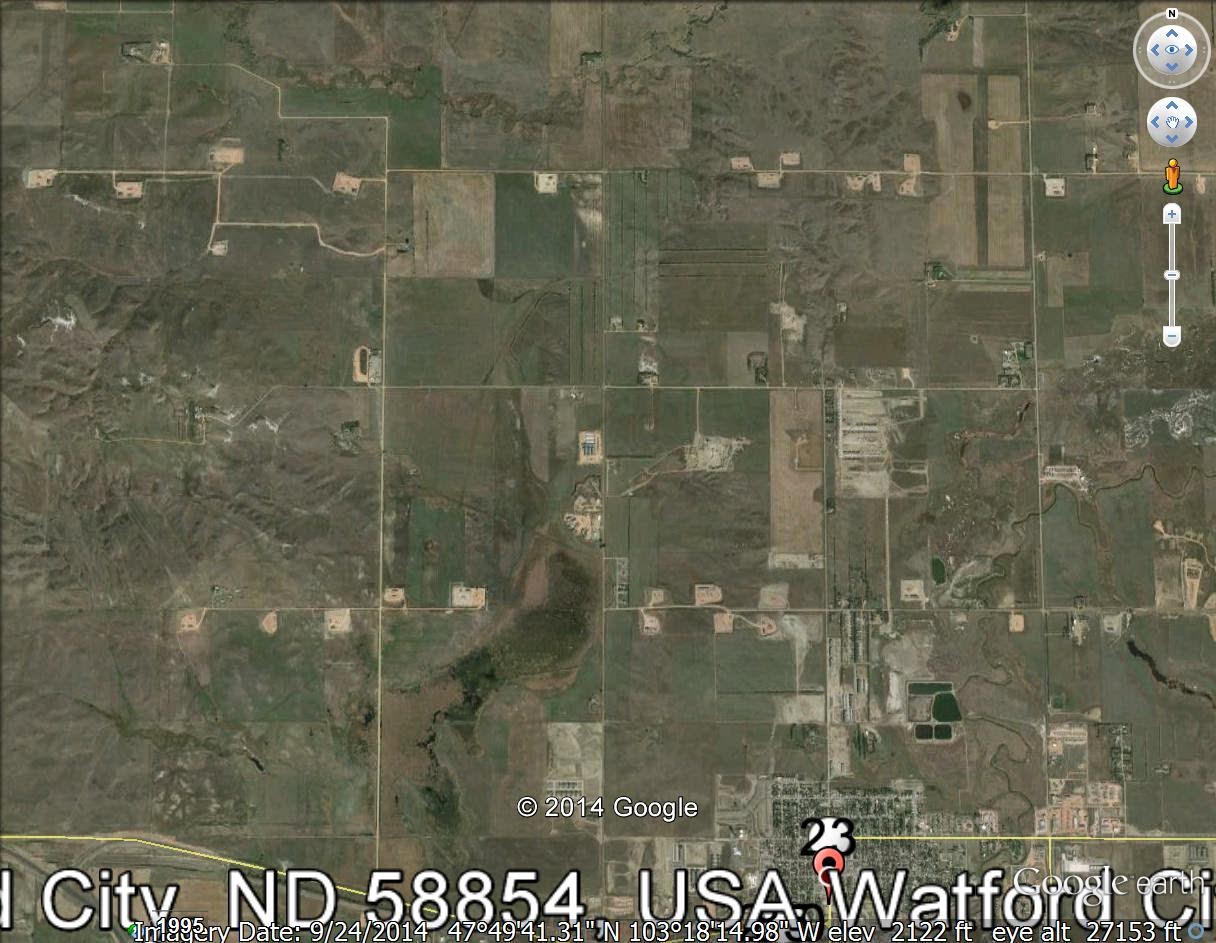 Western North Dakota, just north of the small town (pop. about 1,750) of Watford City. All of those square or rectangular pale patches are fracking pads. The boom is on in the Roughrider State (so nicknamed to help promote tourism), and has been for the last eight years. In spite of ranking 48th among the states in overall population, North Dakota boasts the nation's best economy, and lowest unemployment rate. Want to rent a four bedroom modular home in Watford City? Be prepared to shell out up to $4,000.00 - a month! The high times are here.

This growth has come with a steep price. The New York Times has published a series of articles detailing the woes of the Bakken Shale boom; you can (and should!) read them RIGHT HERE. Thousands of wells pepper western North Dakota's landscape, and in addition to an oil and gas bonanza, they've brought lots of problems. Pollution, corruption, cronyism, catastrophic accidents, habitat destruction, and spills - lots of spills. An estimated 18 million gallons of toxic sludge has spewed into unwanted places in the last eight years.

Reporters Deborah Sontag and Robert Gebeloff seem to have done a thorough job digging the Bakken dirt, and drilling down into the seamy substrate of this shale boom. A veil of secrecy masks much of the information related to drilling, but they did unearth lots of facts, and got some tasty interviews with various officials.

One of their interviewees was Ron Ness, the president of the North Dakota Petroleum Council. Ness states that "...there wasn't a damn thing..." in pre-boom Watford City and vicinity. He goes on to regale the reporters with the benefits of the fracking boom: "We've got the largest-producing Cinnabon anywhere in the world".

Well. Who can argue with that for progress, and a surefire sign of economic growth. Cinnabon, that sugary fat-laden elixir of the turnpike plazas, whose staple Cinnabon Classic packs a whopping 880 calories and 36 grams of fat.

The prairie pothole region, North America's duck factory and an Eden of biological diversity. North Dakota is full of pothole wetlands and vast expanses of prairie, all cranking out birds galore. The annual North Dakota Potholes and Prairies Birding Festival bears evidence of the extreme birdiness of this state. CLICK HERE for their website and a list of the spectacular bird diversity.

But stippling the prairies with well pads is progress, apparently. And progress can be measured by Cinnabon sales.

Very sad--worse than I thought. But I did feel that if we got into the fracking boom we would dearly regret it--just the latest example of a reckless disregard for everything when promoters come to town with a scheme that will leave them rich and a destroyed town in their wake--only here it's all of North America and the world threatened by environmental destruction in the pothole region, habitat for birds that travel across the continent.