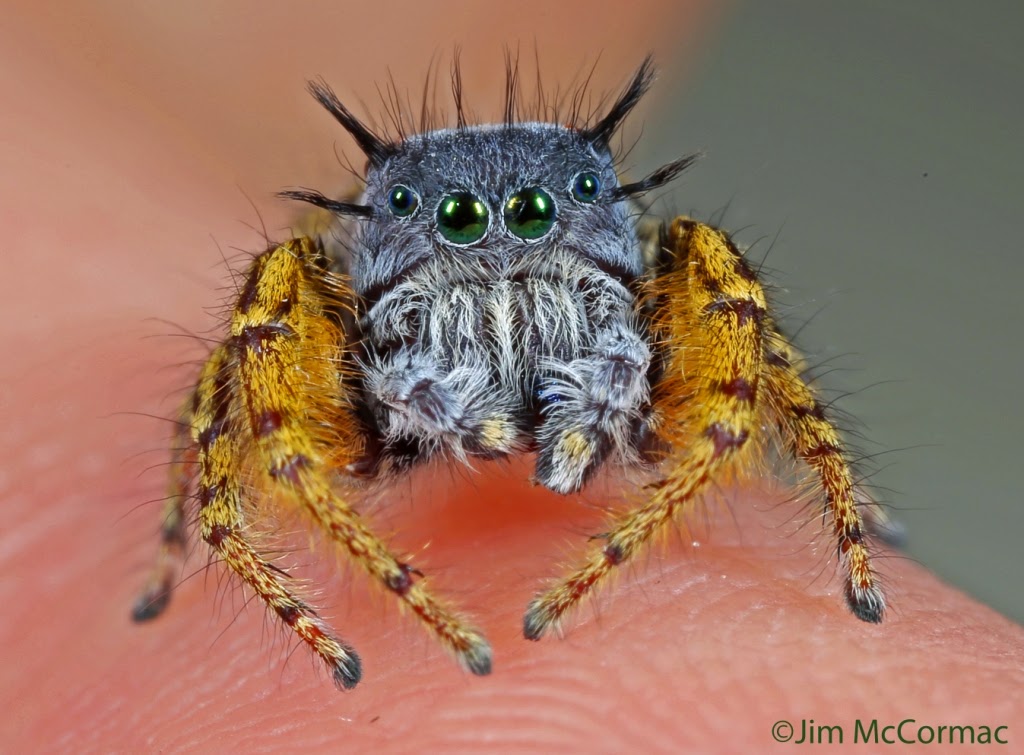 A mustached jumping spider will stalk its meal

Jumping spiders are the extroverts of the arachnid world.

Most spiders prefer to stay out of sight and out of mind. Many remain well-concealed or emerge under cover of darkness.

That is a good thing for the legions of arachnophobes. Such people would rather not know that more than 600 species of spiders occur in Ohio and that they are the most abundant predatory animals in the state.

Many species are outrageous in appearance. The mustached jumping spider (Phidippus mystaceus) resembles a cross between Justin Bieber and Sid Vicious, endowed with three extra sets of eyes and legs and imbued with a homicidal bent.

Most jumping spiders are active during the day and behave like eight-eyed leopards, stalking and pouncing on victims. They shun web building but do make intelligent use of silk.

Before leaping at a victim, the jumping spider attaches a silken belay line. Thus, if the jump were to fail or the prey were to knock the spider away, it can quickly clamber to safety.

Jumpers also craft dense silken bivouacs, which are used for shelter and nurseries for spiderlings.

Experts think jumping spiders possess among the greatest visual acuity of any group of invertebrate animals. A little jumping spider will cock its head curiously at a human and seem to track your every movement. It might even advance on you, to better gauge your intentions.

Have no fear: The spiders are too small to inflict damage, and bites to humans are essentially unknown.

However, potential food had best beware. These formidable foes possess cognitive memory abilities far beyond most other small creatures. The spider can spot prey, move out of sight and into a better ambush locale, and leap unerringly onto the victim, sight unseen. Much larger animals are quickly overcome by the spider’s powerful venom.

About 13 percent of Ohio’s spiders are jumping spiders, and they represent the world’s largest family of spiders.

Such success has spawned fantastic evolutionary radiation. Some jumping spiders have evolved to appear remarkably similar to ants. The disguise is so good that even naturalists can be fooled, as can the spider’s potential predators. Ants are largely unpalatable and can be highly aggressive, so resembling one can be a good deterrent to predators.

Jumping spiders hit their pinnacle of outlandishness when mating season rolls around. Males must approach the larger females with caution, lest they be mistaken for a meal.

To up their odds, male jumpers engage in ornate displays that involve waving their legs like a sailor signaling with semaphores and flashing iridescent body coloration.

Some spiders even create drumrolls or vibrations to add audio effects. Spiderish vaudevillian acts identify them to the aggressive females.

The Ohio Division of Wildlife offers the free publication Common Spiders of Ohio. To get a copy, call 1-800-WILDLIFE or send email to wildinfo@dnr.state.oh. us.

Naturalist Jim McCormac writes a biweekly column for The Dispatch. He also writes about nature at www.jim mccormac.blogspot.com
at November 16, 2014

I enjoyed this post a lot, as I know little about jumping spiders but I do enjoy their curiosity and occasionally vivid coloring.