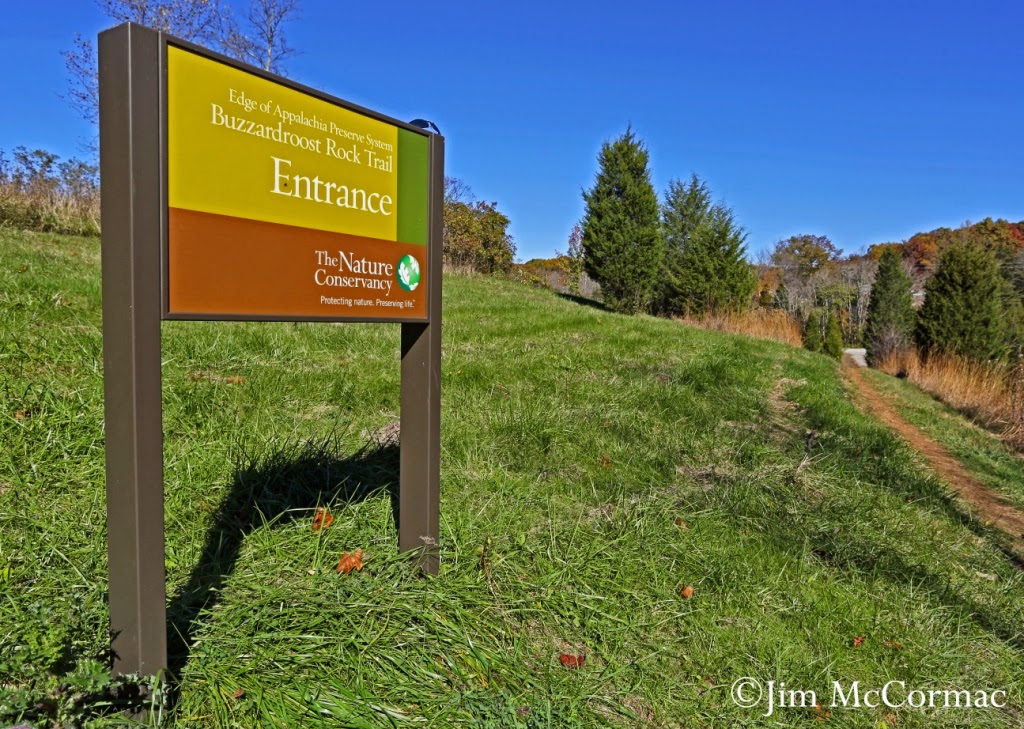 Last Sunday, October 25, dawned crisp and clear. I know, because I watched the sun came up as I drove to one of my favorite places in Ohio. This day was to be the last of the great fall days, weatherwise, and I wanted to be atop a certain conspicuous promontory soon after sunrise.

The sign above points the way to one of the best - and most significant - hikes in the state. The Buzzardroost Rock trail is about a 4.5 mile round trip, and worth every footfall. It is part of the vast Edge of Appalachia Preserve in Adams County. I toted my backpack full of camera gear along, and managed to make a few passable photos during the trek. 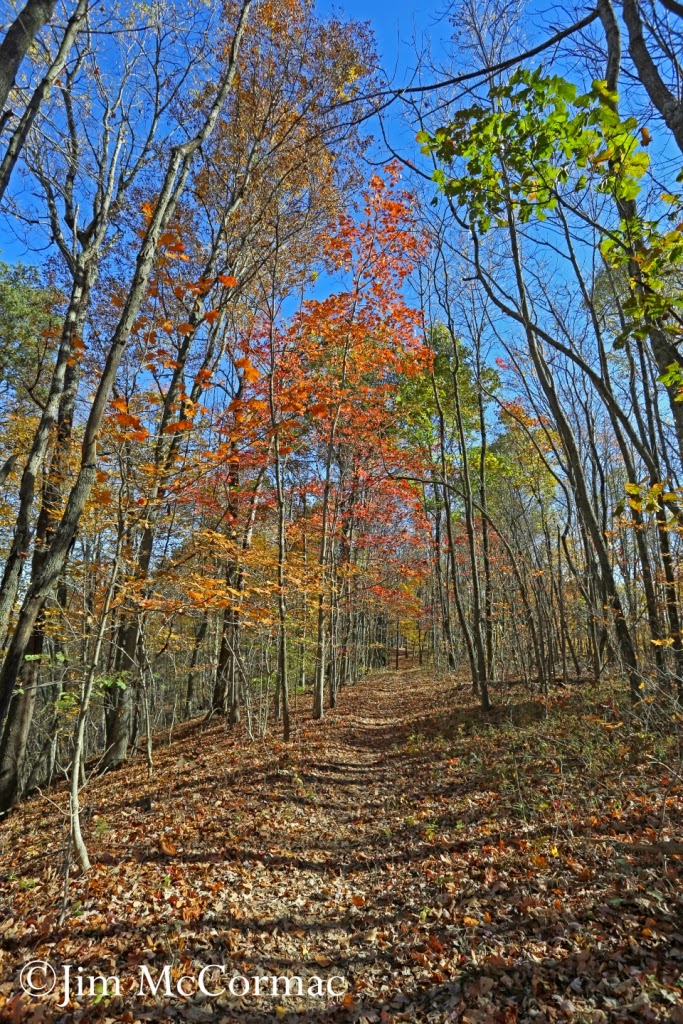 The scenery, from a fall leaf color perspective, was still stunning if slightly past peak. One of many great things about living in the vast eastern deciduous forest region is the conspicuous change of seasons. Nothing signals the changing of the guard like late autumn's brilliant burst of foliage. Of course, the color is but a short-lived harbinger of the coming of Old Man Winter, but the next few months of snow and cold will bring their own charms, and make the arrival of spring that much sweeter. 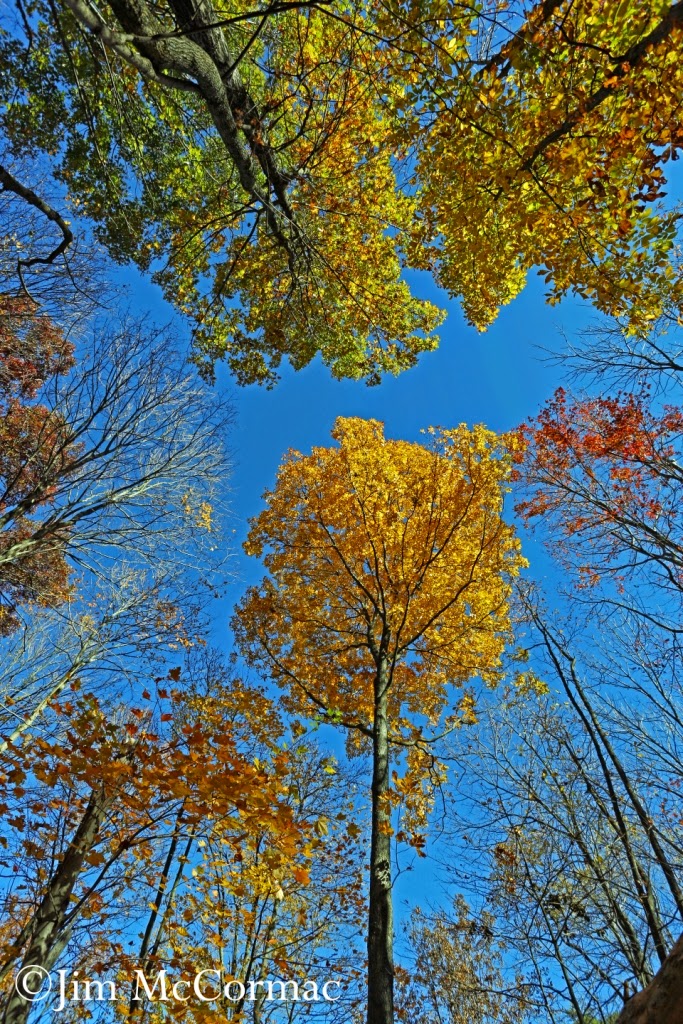 Not a bad canopy to have over one's head! I found myself constantly ogling the trees, searching for the perfect shot. Myriad options presented themselves, and scads of photos were taken, but I like this image as well as anything I clicked off on this pristine day. For those of a photographic bent, it was shot with the Canon 5D Mark III rigged with Canon's 17-40L wide-angle lens, using a focal length of 17 mm. ISO was set to 100, shutter speed was 1/200, and the lens was stopped down to f/8. I was lying on my back in the leaf litter to better get this perspective. 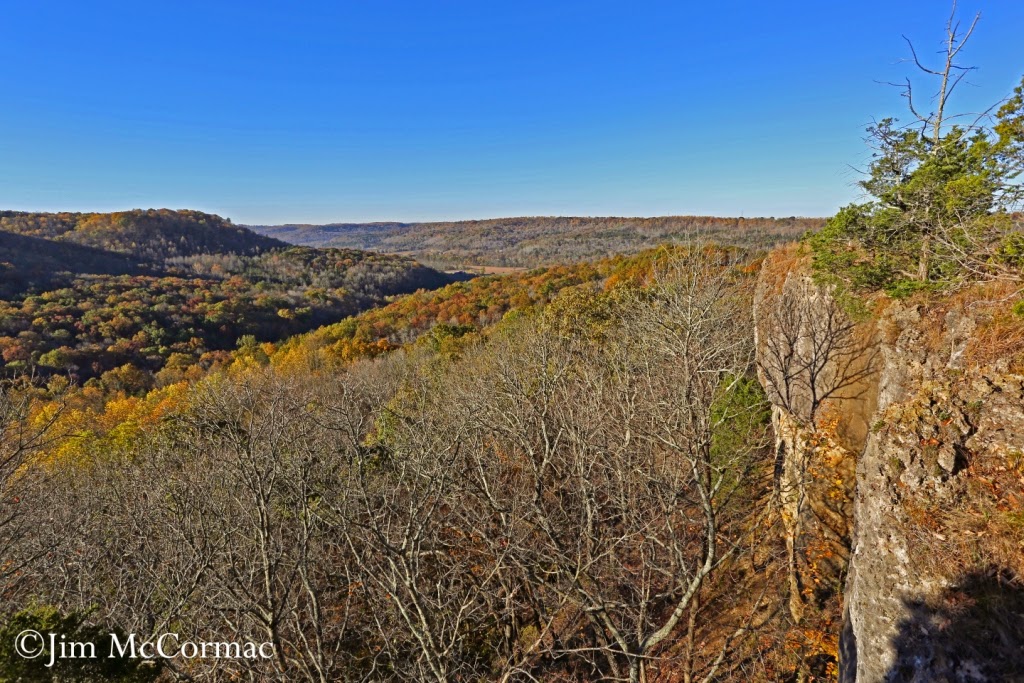 After a fairly speedy hike, I reached the trail's terminus and the namesake Buzzardroost Rock while the sun still hung low in the east. Limestone cliffs tower 70 feet above the forest floor, and the view from the rock is extraordinary. You MUST make this trip at some point.

Buzzardroost Rock is part of the sprawling Edge of Appalachia Preserve, which is co-managed by the Cincinnati Museum Center and the Ohio Chapter of The Nature Conservancy. The preserve now encompasses about 16,000 acres, and TNC regularly adds new parcels. Their Sunshine Ridge corridor project is an effort to link "The Edge" to the 65,000 acre Shawnee State Forest, which lies not far to the east.

The Shawnee/Edge region is the wildest landscape remaining in Ohio, and one of the most significant biological hotspots east of the Mississippi River in North America. Rare habitats and unusual flora and fauna abound, and I have featured scores of them on this blog over the years. The primary reason that so many natural history events - at least ones that I have had a hand in - take place down here is because of the natural diversity. Mothapalooza, Flora-Quest, numerous Ohio Ornithological Society conferences, and the Appalachian Butterfly Conference, are but a few. People attending Mothapalooza III next year will once again be wowed by this area, and one of the trips will journey to the very rock that you are now virtually visiting. 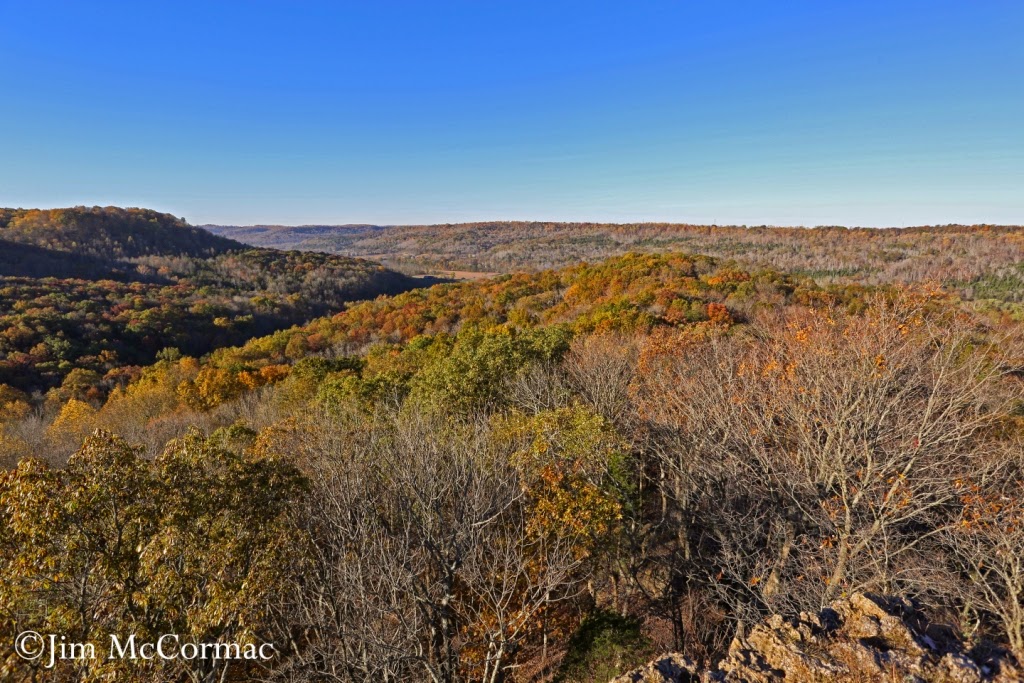 Ohio Brush Creek carves a whopping dimple through heavily forested terrain. This stream is one of Ohio's healthiest, in large part because so much of the buffering landscape has not been badly abused and is largely protected. 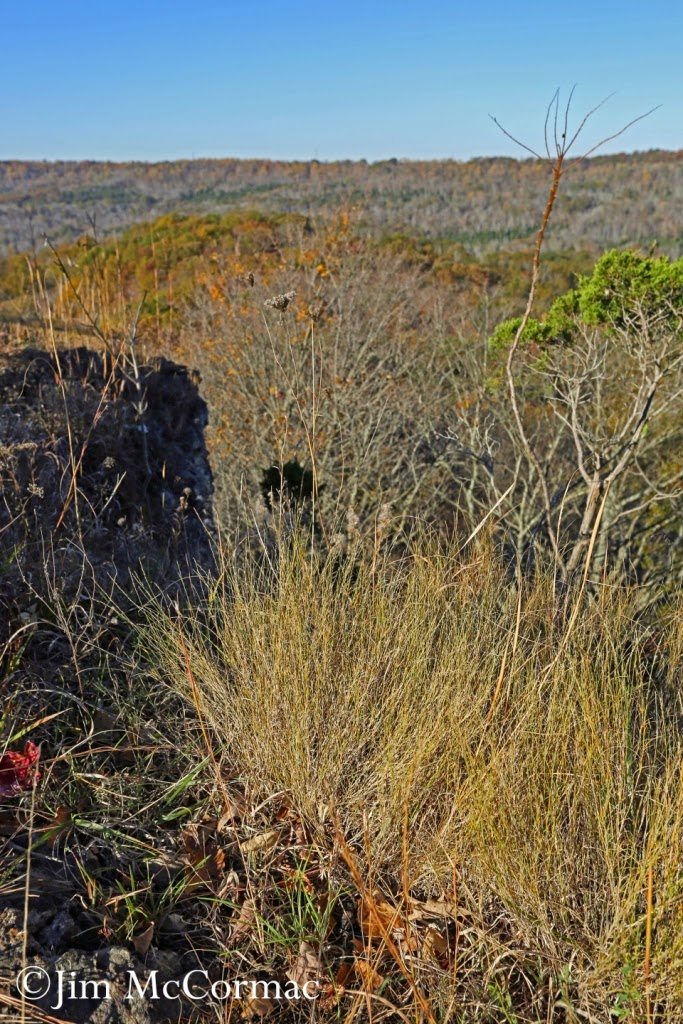 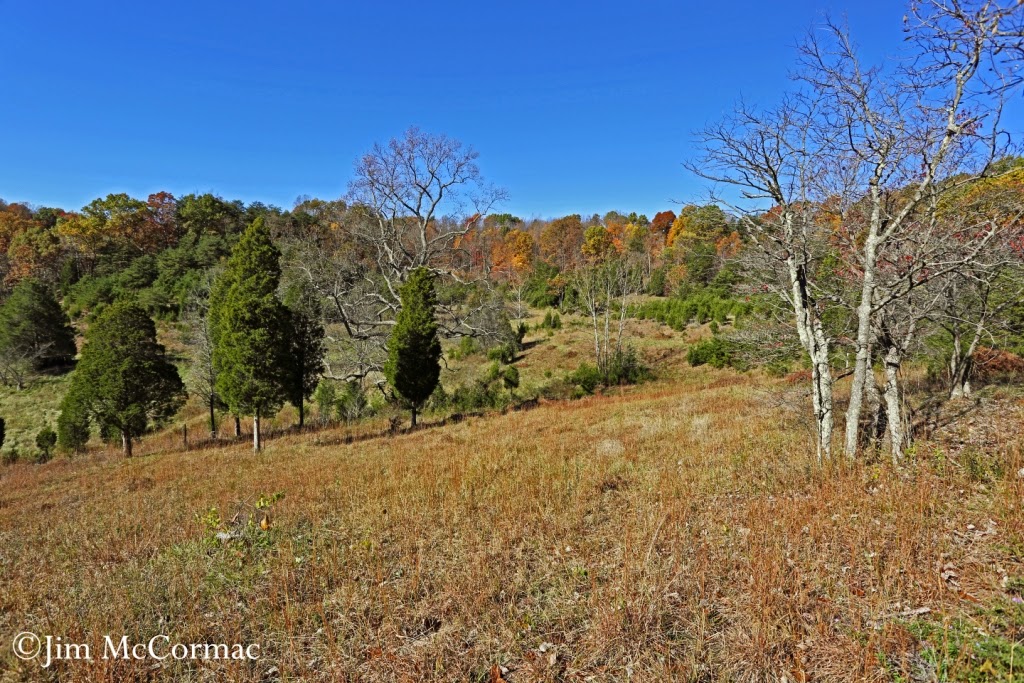 On the return trip, I adopted a much more leisurely pace and explored habitats such as this prairie opening. Signs of former pasturing were present, but managers are working to return this spot, and many others, to barrens prairies. The botanical diversity in places such as this is fabulous, and botanists can lose themselves for hours searching about barrens prairies. It was a habitat similar to this that I made the photos of Stiff Gentians featured in the previous post. 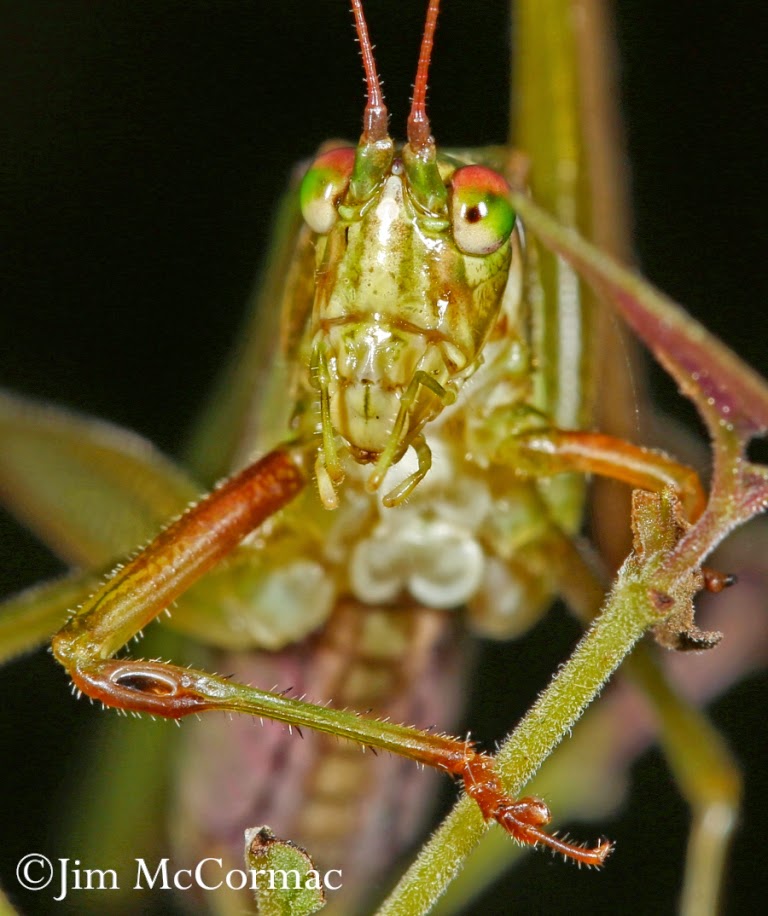 While their collective voices have largely been muted, a number of singing insects still held on. This is a Treetop Bush Katydid, Scudderia fasciata. Many of the katydids seem to color up somewhat as fall fades, their increased reddish pigments serving to better allow the insects to blend with senescent fall foliage. This animal is a male, and note his ear, just below the knee on its foreleg. While that may seem to be an odd place to have one's ear, it serves these insects well. By having its ears as far apart as possible, the insect can better triangulate on sounds and pinpoint their source. 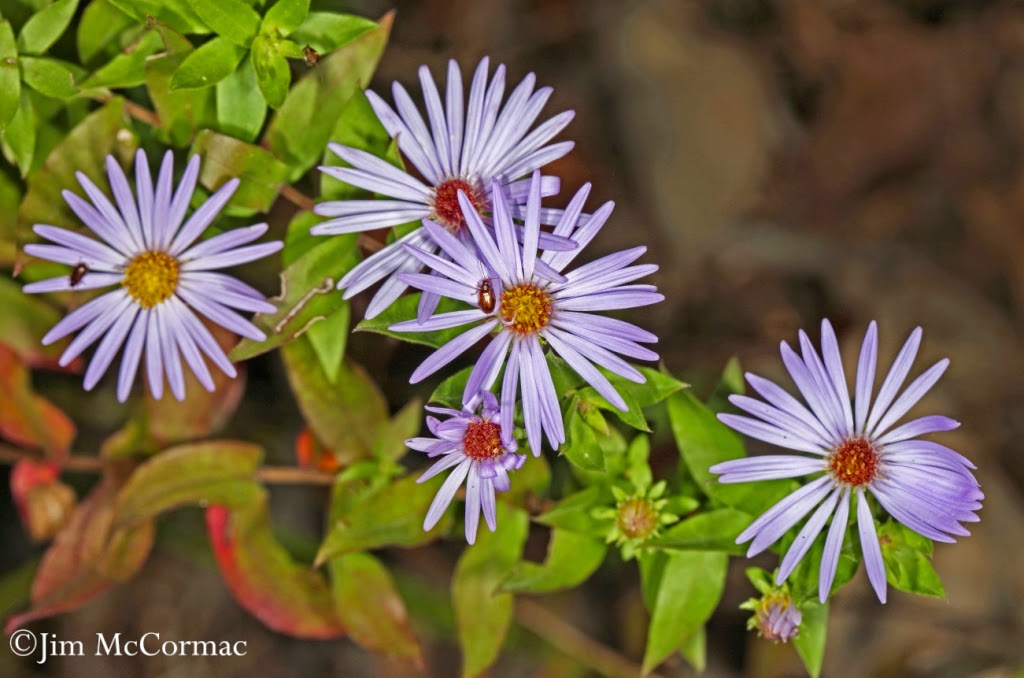 Asters are without doubt the botanical markers of fall's conclusion, and many species hold on past first frosts. This one is a rarity, the Shale-barren Aster, Symphyotrichum oblongifolium (Sim-fee-oh-tri-kum oh-blon-gih-fol-ee-um). Horticulturists have worked wonders with this species, and a cultivar is now widespread and available at many nurseries. Get one if you can. Shale-barren Aster is a pollinator magnet extraordinaire.

If you get the chance to visit the Edge of Appalachia Preserve, by all means do so. More information is available RIGHT HERE, and HERE.

Oh, it looks like a WONDERFUL place. I've added yet another spot to visit on my "to-do" list.