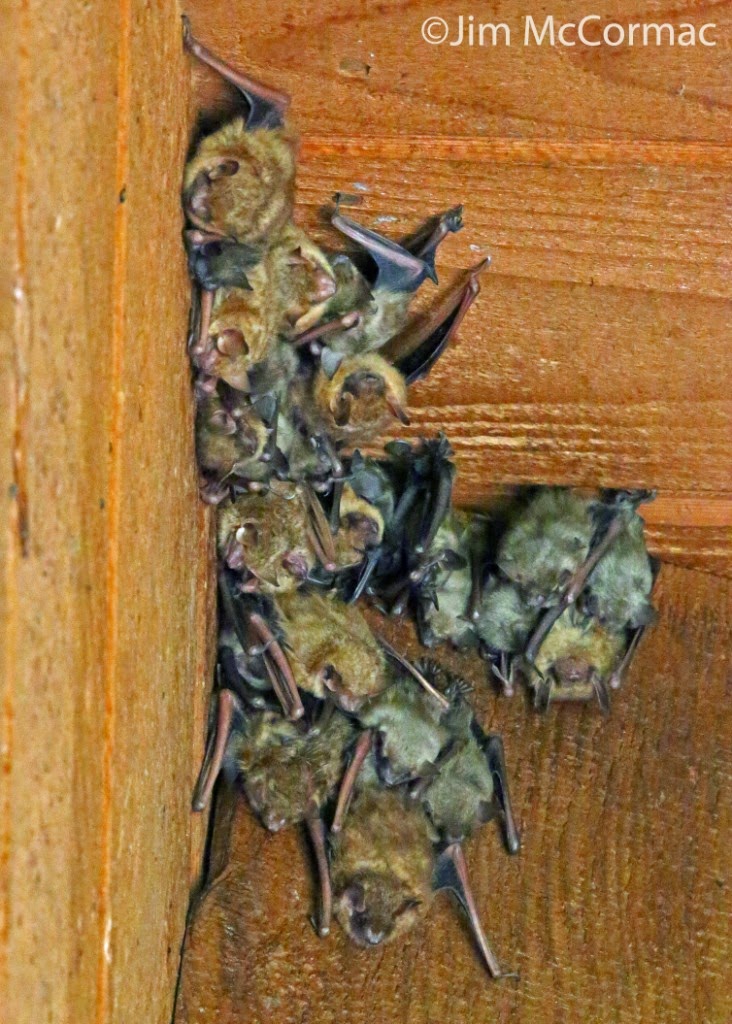 A tightly packed scrum of Tricolored Bats, Perimyotis subflavus, clusters in the dim recess of a building in Warren County, Ohio. I was down at Caesar Creek Reservoir last weekend to meet with our planning committee for this Saturday's Butterfly Workshop, spearheaded by the Midwest Native Plant Society (organized to run the annual Midwest Native Plant Conference). I was pleased indeed to learn that the building that we were meeting in plays host to a pack of these tiny bats. Not only that, but what we have here is a maternity colony! There are eleven or twelve adult female Tricolored Bats in the scrum; the grayer, smaller bats are recently born offspring a week or so of age.

Sorry for the less than stellar image, but I was unwilling to shoot bright flash into their alcove, which would have made for a crisper photo. 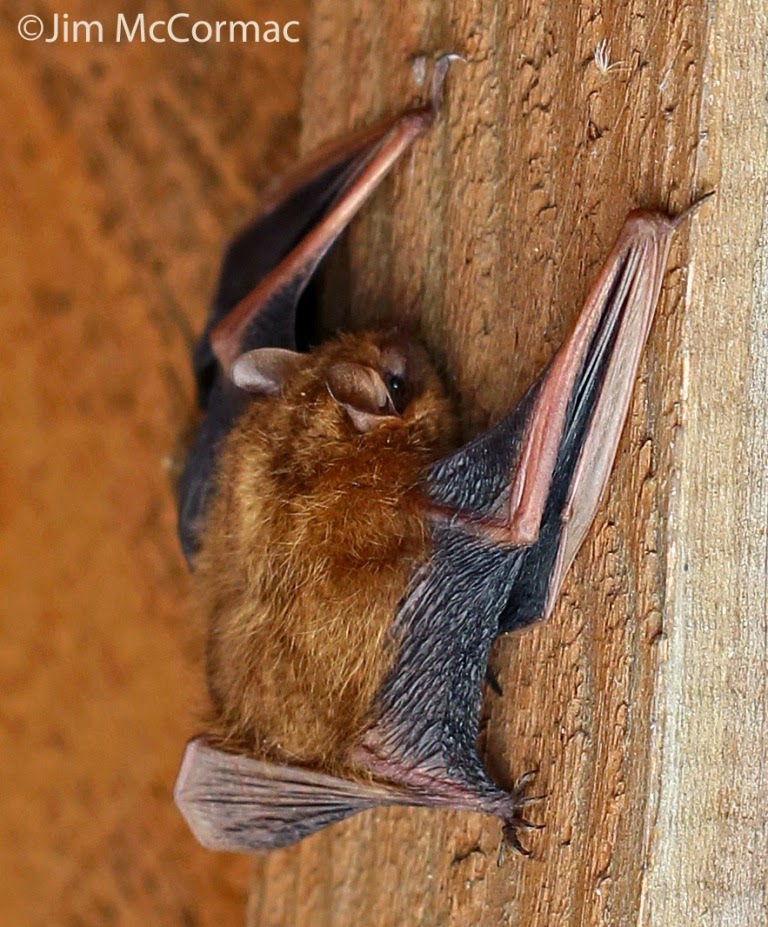 However, one of the bats was isolated from the community and down much lower on the wall. It may have been slightly dehydrated, or maybe it just set down in the wrong place come dawn. Whatever the case, it was far more visible than the others. Nonetheless, we kept a respectable distance, and kept an eye on her, as she was in an area with regular people traffic. Eventually the bat did make her way to a much more sheltered and hidden nook in the wall.

Tricolored Bats were formerly known as Eastern Pipistrelles, and they are the smallest of Ohio's regularly occurring bat species. A big one might weigh 10 grams; a dinky one maybe 4-5 grams. To me, they resemble little golden mice with wings. 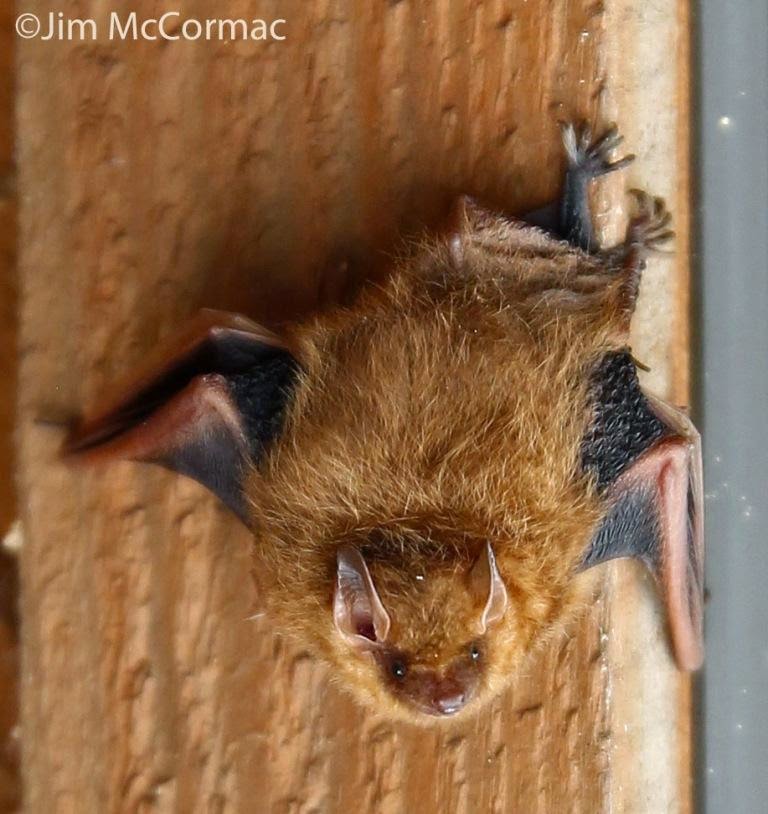 Tricolored Bats probably use trees and other structures a lot for warm weather roosts, but in winter they duck deep into caves to hibernate. And that habit, unfortunately, is proving to be their downfall, along with other cave-dwelling bat species.

In 2006, a strange malady affecting bats was noted in a New York State cave, and eventually branded as White-nose Syndrome, which is caused by the fungus Pseudogymnoascus destructans. It is suspected the fungus, which is native to Europe, was transported to the cave by a spelunker(s) who had recently been caving in Europe. Infected bats show whitish fungal crusting on their faces, hence the name.

The disease spread rapidly, and today has been recorded in 22 states and 5 Canadian provinces. WNS fungus, which thrives in damp cool places such as caves and mines, has had disastrous impacts on cave-dwelling bats such as the Tricolored Bat. In some cases, 95% of an impacted colony can be wiped out - worst case scenarios, complete mortality - and to date millions of bats have perished. Ironically, as is the case with so many introduced pests, the fungus apparently has no discernible impact on bats in its native range.

Bats play an incredibly important role in our ecosystems, especially forested areas in this part of the world. Collectively, they harvest untold millions of insects on their nocturnal forays, and are estimated to provide billions of dollars in pest control value annually in North America. 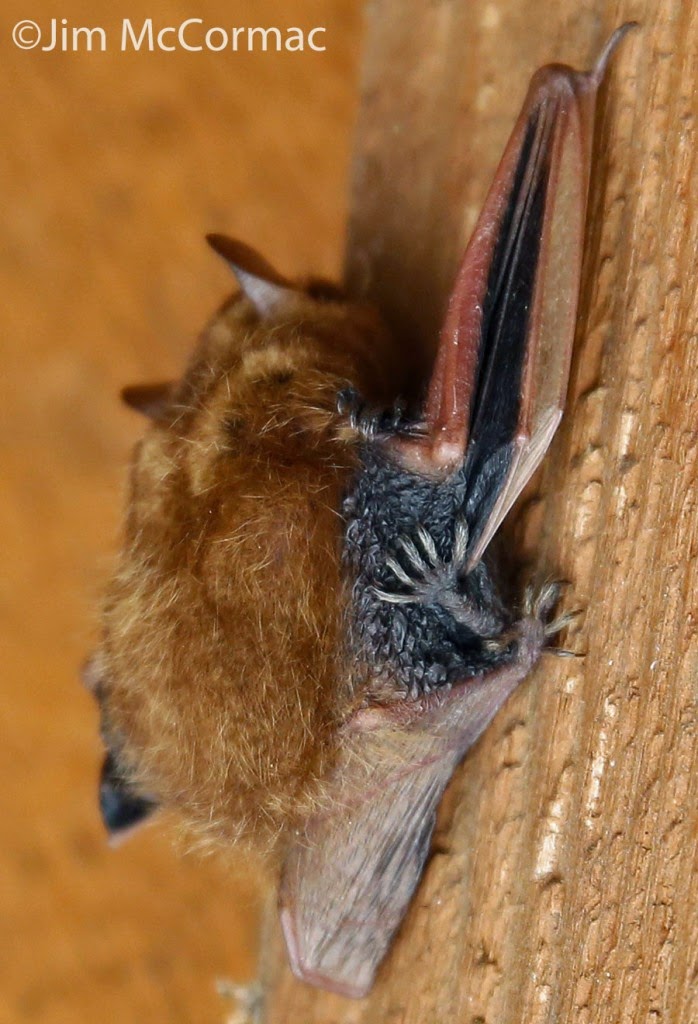 Look! A tiny foot is extended from underneath Mrs. Tricolored Bat! Our bat is concealing a week or two old baby. For a few weeks, the juvenile bats are closely guarded by the mothers, who feed them milk. Mother bats enwrap the babies with their wings and shelter them during the day, and can even fly with baby on board. Come August, this baby bat and the others should be free-flying.

This colony of bats has been returning to this exact spot and breeding for nineteen years. Our escort and source of information about these Tricolored Bats was Kim Baker, ranger and interpretative guide with the U.S. Army Corps of Engineers. Kim and her colleagues have kept close tabs on these bats for years, and take pains to protect the colony. That's undoubtedly why they have been returning here for so long, even though their home is an artificial structure.

As Tricolored Bats are one of the species effected by White-nose Syndrome, Kim and company cross their fingers and hope for the best each spring, when the bats are slated to return. So far, so good, and their numbers have remained fairly constant. Let's hope this colony of bats manages to dodge the White-nose Syndrome bullet.