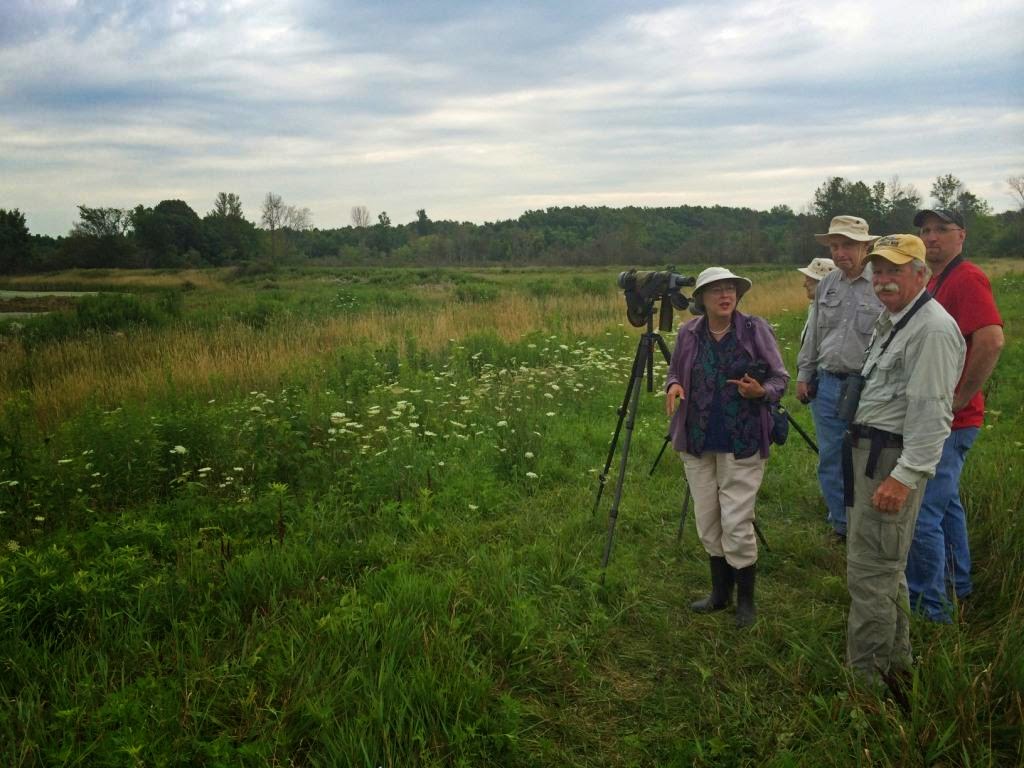 A small knot of birders takes a break from oohing and aahing over a trio of very rare birds (for Ohio) in the wetland in the backdrop.

Last Friday, I got a phone call from Larry Richardson, the guy in the foreground with the yellow cap. Larry, who is one of Ohio's ace birders, had just discovered three Black-bellied Whistling-Ducks, Dendrocygna autumnalis, along with Don Keffer (in the red shirt). As good fortune would have it, I was heading to Geauga County the next day to give a talk and lead a walk. Larry and Don had found the ducks at the sprawling Grand River Wildlife Area in Trumbull County, and the site was only about a half-hour from where I was speaking.

So, after the program/hike concluded, I raced over to the ducks and was greeted by Larry soon after arrival. 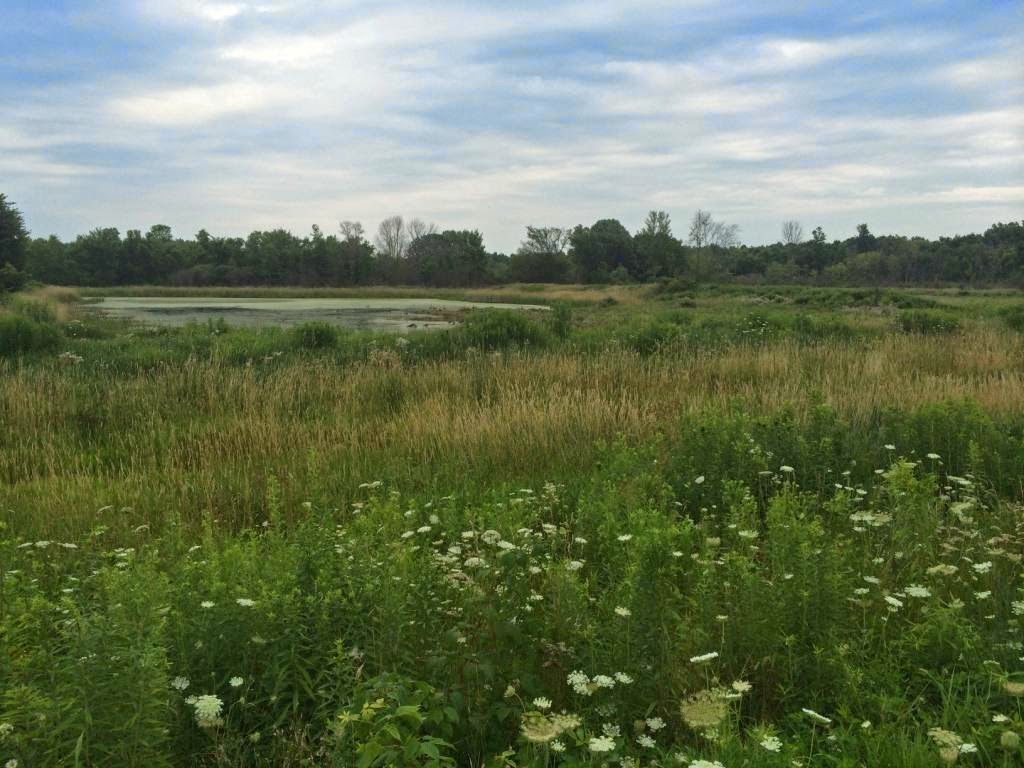 The 7,500 acre Grand River Wildlife Area is dotted with wetlands. The marsh in this photo is where the whistling-ducks are hanging out. They are actually there, in this photo, but some distance away as you can see. By the way, for any rare bird chasers, they were still there today and may stay for a while. Details are regularly posted on the Ohio Birds Listserv. 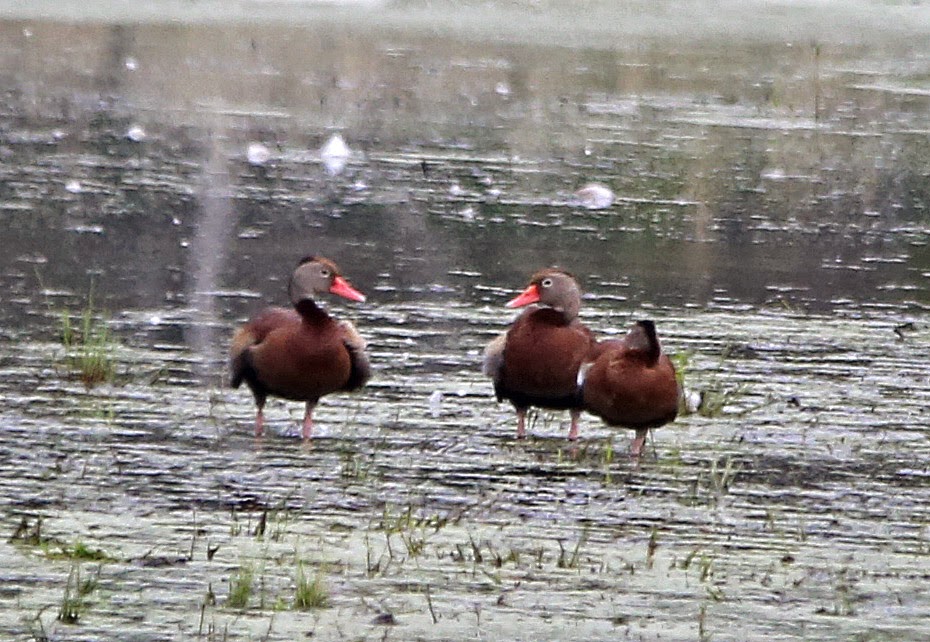 This photo and the following will win no awards - I didn't even bother imbedding my copyright/name (steal away, photo pirates!). But nonetheless, they are good for at least two lessons. One, bad as they may be - the distance and low light were too much for even my 500 mm lens - they clearly show three Black-bellied Whistling-Ducks.

And two, these photos will be among blizzards of images that have been made, or will be, of these birds. Photographic documentation of rare birds has come a long way in the past decade. I served for seven years as secretary of the Ohio Bird Records Committee, which validates sightings of rare birds. I also served a three-year term before becoming secretary. In that decade span, from 1995 to 2004, I saw the number of photographic submissions begin to spike noticeably. The number of rare birds that are documented photographically is FAR higher now than when I left the committee. Even bad images that clearly show the bird in question make life much easier for rare bird record committees. In the olden days, we often had to try and decide upon records based only on a written description, and often not a very complete or comprehensive one at that. 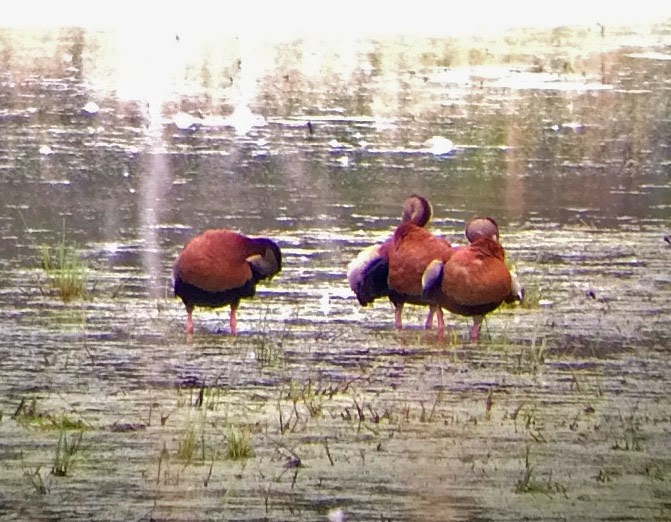 This photo is even worse than the previous. I made it by putting my iPhone up to Larry's scope and snapping the shutter. Still, it demonstrates the absolute ubiquity of cameras. Nearly everyone has a phone with camera these days, and even those can be used to gather documentary photos. Rare is the rare bird that goes un-photographed in this day and age, giving us much more solid evidence in regards to rare avifauna.

Larry Richardson, remarkably, has found two of Ohio's records of this species. Read about his previous whistling-duck discovery HERE. Black-bellied Whistling-Ducks range throughout much of South America and Central America, and in the United State occur regularly in the southern Gulf States and parts of Arizona. This is a duck on the move, however, and it is actively expanding its breeding range northward. As the population swells, so have the extralimital records. All of Ohio's have come within the last decade. I think we can expect to see even more of these gorgeous ducks in the future.


Congratulations to Larry and Don for an excellent find, and for so quickly sharing the news with the birding community.

These birds have been spotted again this year. See facebook under hardcore waterfowler