A trip to the prairies (or what's left of them)

A summer would be incomplete without a visit to the scraps of remaining prairie west of Columbus. A few sites like the above, tiny 1/2 acre Bigelow Cemetery, are all that remain of the formerly vast Darby Plains, which covered some 385 square miles. My generation must make do with postage stamp-sized museum pieces. Once Deere unleashed his chisel plow, game over for the prairies. What was once a botanical wonderland full of an incredible floristic diversity, with attendant abundant animal life, has been pulverized by the plow. Over 99% of Ohio's original prairie has been converted to the Big Three: corn, soybeans, and wheat.


I still greatly appreciate what we have left. Bigelow Cemetery, which dodged the plow as burial grounds are sacred, and the cemetery was established before farmers had gotten around to plowing up all of Madison County, was looking good. I was there yesterday, and reveled in the mid-July explosion of prairie plants.

Purple and Gray-headed coneflowers, Wild Bergamot, and Royal Catchfly paint the tiny cemetery in a rich palette of colors.

The Royal Catchfly, Silene regia, is exceptionally vigorous this year. This is a prairie plant if there ever was one. If you see Royal Catchfly, and it's growing wild, you are in a prairie, or at least the remnants of one. Whenever I see this beauty, I take photo after photo, trying for the perfect image. Yesterday, while standing quietly composing images, my frame was photo-bombed by a female Ruby-throated Hummingbird. Alas, before I could react and snap her chin-deep in a catchfly flower, she noticed me and shot off, scolding your narrator with a barrage of angry squeaks.

Where the coneflowers and catchfly end in the above photo, beans and corn take over. And stretch for miles and miles in all directions. What collective fools we are, as a species, to destroy so much of our richest (former) natural resource. You'd think we might have saved - not to be greedy or anything - maybe five (three? two?) percent of it. What a richer Ohio we'd have.

Enough of lamenting the stupid follies of our imperfect primate past. You owe yourself a visit to Bigelow Cemetery, soon. While the catchfly still blooms. More info on this pioneer cemetery HERE.


Another prairie shard that I visited was Milford Center Prairie in Union County. This scrap, like the cemetery, exists largely by accident. A railroad bisected the prairie at this point, and the buffering right-of-way was spared the plow. After the tracks were yanked, a utility acquired the right-of-way and installed power lines, thus keeping the plow at bay.

There is apparently a mass synchronous bloom of Royal Catchfly, because it also looked as good as I have ever seen it at this spot, too. NOTE TO MANAGERS: Milford Center Prairie really needs a good fire. Maybe next fall or spring...

Nearly overshadowed by the botanical extroverts was this diminutive little plant, the Hairy Ruellia, Ruellia humilis. What an ungraceful common name - and common names are quite important! Another option with a bit more pizazz might be "Prairie Petunia". 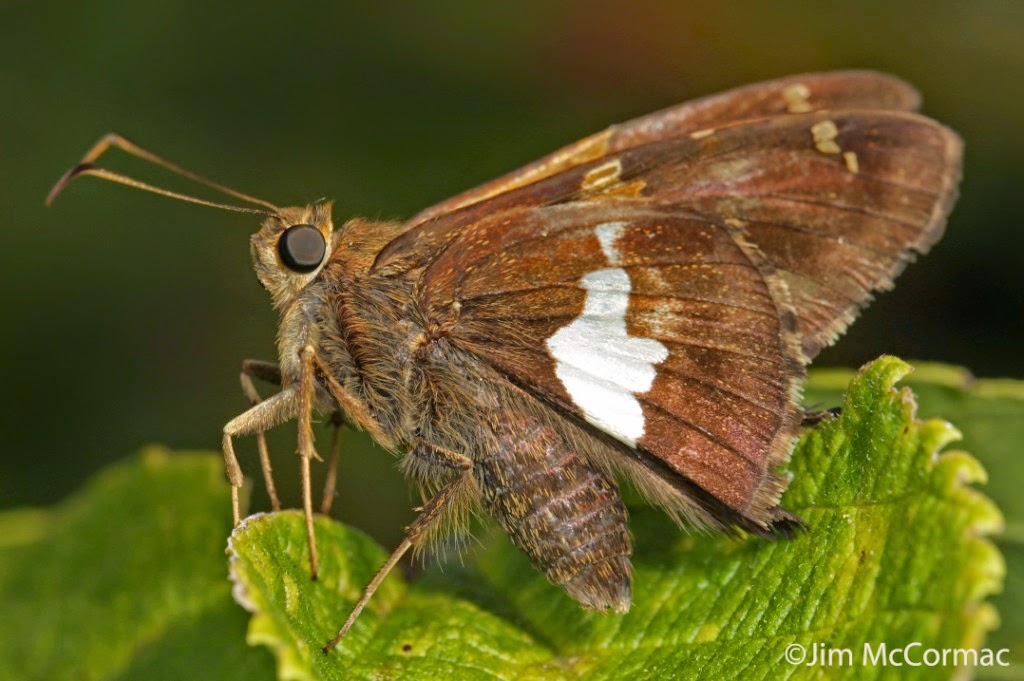 I was pleased to be strafed by this F-15 of a butterfly, the Silver-spotted Skipper, Epargyreus clarus. He finally settled on a leaf, and seemingly entranced by my macro camera rig, allowed me right up into his grill. Normally this species, the largest of our skippers, is rather wary and close approaches can be difficult. I was grateful for his cooperation.

Less cooperative, strangely enough, was this Exposed Bird-dropping Moth, Tarache aprica. Normally the animals that mimic bird droppings - there are scores - sit and pose quite nicely. They are apparently confident in their resemblance to fresh Blue Jay splat. Very few things enjoy eating bird droppings, so if you can do a good scat imitation, your chances of survival rise.

I had to stalk this moth, and after the third flush it finally allowed me in close enough to obtain this one image. After making my photo, it vanished into the thick prairie vegetation from whence it came.

One can only imagine my pleasure at stumbling into this black and scarlet beast. It is a Poison Ivy Sawfly, Arge humeralis, and the animal is quite the showstopper if you ask me. As you may have inferred from the name, the larvae of this species - they greatly resemble caterpillars in appearance and behavior - feed on Poison Ivy. As if you didn't already like this bug.

The sawfly is standing on a rich carpet of Queen Ann's Lace flowers, and was busily working them over. Note how its head is liberally encrusted with pollen. Forget the European Honeybee - all manner of native bees, wasps, flies, beetles and others do the heavy lifting when it comes to pollinating our native plant crops. While Queen Ann's Lace, Daucus carota, is not a native species, it sure does lure insects. as do many of our native parsleys.

Both of the prairie remnants that I visited host lush beds of this plant, Scurf Pea, Orbexilum onobrychis, and the plants were adorned with both flowers and fruit.

It didn't take much searching to uncover one of these beautiful polka-dotted caterpillars. It is the larva of an as yet to be described species of flower moth in the genus Schinia. I recently shared photos of the moth IN THIS POST. I had discovered this species in Milford Center Prairie two years ago, and it seems to be doing well. Yesterday, in short order, I found six of the caterpillars, and didn't check the vast majority of host plants that are present.

Our yet to be named flower moth caterpillar is a finicky eater. Scurf Pea is its only known host. Not only that, but the cats eat only the innards of the fruit. In the above photo, the caterpillar has bored a round hole through the fruit's wall and is vacuuming out the contents. Wedding oneself so tightly to one plant species is generally a bad strategy. If some other animal comes along and destroys 99% of your habitat, your fortunes will plummet. I've written more about this rarity HERE. 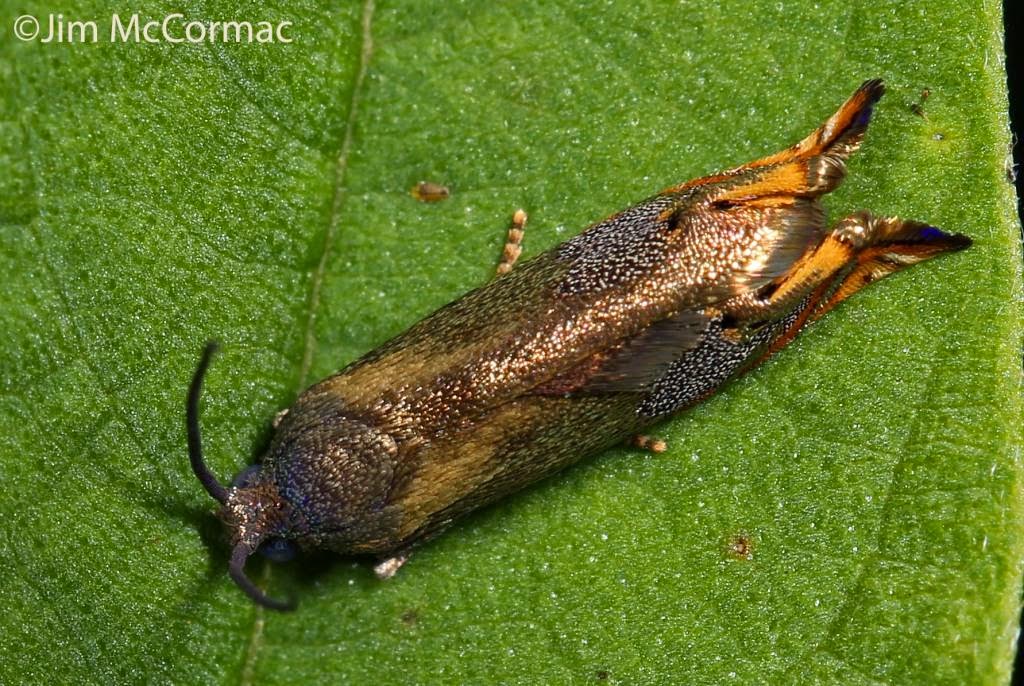 While perhaps the most humble of the flora and fauna featured in this post, I was most excited to find this tiny flake of a moth. It is a true rarity, perhaps even scarcer than the previous Schinia flower moth. This one does have a name, though: Coppery Orbexilum Moth, Hystrichophora loricana. The animal in the photo was at Milford Center Prairie, and it was the only one that I saw in spite of an hour or so of searching. Laura and David Hughes had discovered it there last year. I also found one, only one, at Bigelow Cemetery yesterday, adding Madison County to its range.

The Coppery Orbexilum Moth was originally discovered near Dayton, Ohio in 1880, and was described to science from that specimen. Then it dropped off the radar for about a century, until an entomologist found a few small populations in southern Illinois. John Howard found a couple populations in Adams County, Ohio, and a lepidopterist also located some of the moths in Kentucky. A few years ago, I stumbled into one in a prairie near Dayton, and was able to photograph it. I'll have to try and unearth the moth's original description sometime and see if I can ferret out exactly where in Dayton the original collection was made. Maybe I refound the site. Anyway, insofar as I know, those are all of the known occurrences of this inconspicuous little moth.

I'm glad we have spared a few little scraps of prairie for the moths, and the scores of other flora and fauna that are prairie-dependent.

I think it's great that the cemetery isn't mowed...and I'm surprised at how forb-rich the site is! So often the grasses seem to crowd the forbs out, at least around here.

Great post. I couldn't agree more on the stupidity of our ancestors. We've lost so much, and unfortunately, the almighty dollar is still allowing bad decisions on the part of developers and politicians. What a shame.......

I've often wondered why factories/corporations/etc don't make those endless acres of mown grass into prairies. Think of the money that would save them on maintenance.

The U.S. Department of Agriculture's Beltsville (Maryland) Agricultural Research Center has for many years done what Sue suggests--they stopped mowing on many acres and found prairie grasses grew from seed stored maybe a century ago in one area.

They've restored similar habitats by not mowing, including an oak-savannah area, a habitat thought to be created by Native Americans making clearings in the woods.

They save on all that maintenance. I know I plan to gradually take out all the lawn on the 1/4-acre lot I live on now and replace it with prairie plants, native plants, wildflowers, etc.