I've been on a bit of a moth jag, I know, but it's hard not to be after Mothapalooza. When I mention moths and the Mothapalooza conference (150 attendees!) to some acquaintances, I think they're probably wondering if we're all daft. I suppose I can understand a reaction like that - if one knows nothing about moths. The reality is that moths are seemingly endlessly diverse - at least 3,000 species in Ohio alone - and often strikingly beautiful and ornate. More importantly, moths, and especially their caterpillar larvae, make the natural world go 'round. Were it not for moths in all of their life cycle phases, life as we know it would cease.

Following is a briefly captioned slideshow of just a smattering of moths that I've photographed in the last week or so. All of the following come from Adams County, Ohio, where a few of us spent field time just prior to Mothapalooza.

Five year old Lily Howard shows entomologist David Wagner a giant cecropia moth, Hyalophora cecropia. Her awe at the beauty of the massive insect was apparent, and Dave is quite impressed too, even though he's seen scores of them.

Wagner is one of the leading entomologists in North America, and the top caterpillar expert in the country. CLICK HERE to see his book that brought caterpillars to the masses. He has now come to the Adams/Scioto County region of southern Ohio at least six times. That's because this area is an absolute treasure trove of lepidopteran diversity. A truly impressive moth, the cecropia appears even larger on Lily's hand. It's not hard to see why someone might become interested in such creatures.

The evening of Wednesday, June 25, was a night not soon to be forgotten. Wagner and I were staying at the Eulett Center in the heart of the sprawling 15,000-acre Edge of Appalachia Preserve, and we were running several light traps around the building. Derek Hennen and John Howard were with us earlier in the evening, but unfortunately for them, they had to depart before things got really good. Just before dusk, a storm rolled through, and the evening was muggy and humid, with fog so thick at times you could see your shadow on it. By 10:30 pm, the moths were coming in by the droves. We worked the sheets until after midnight, crashed for a while, and got up again at 4 am to see what was up.

We were stunned by the scene that greeted us. The sheet in the photo, illuminated by a high-intensity mercury vapor bulb, probably had 2,000 moths on it or perched on nearby walls and flooring. The majority of moths were highly migratory armyworm moths - there must have been hundreds of thousands passing over that evening; I'm sure we pulled in only a small fraction of what was out there. But a huge diversity of other moth species were also drawn to the lights, and a few of those follow. 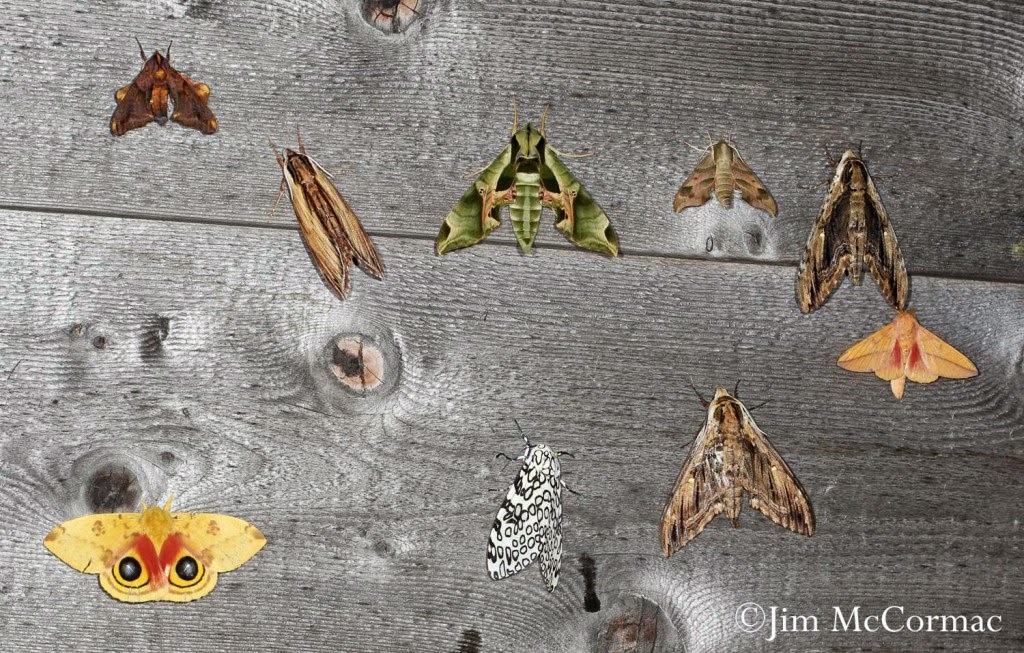 Lots of big silkmoths and sphinx moths came in, so many in fact that we couldn't resist posing as many as possible on a nearby wall. Big moths such as these are usually quite tame and easy to handle, which allows the photographer to move them to substrates more favorable than a stark white sheet for photo shoots.

The pandorus sphinx in the previous photo was incredibly striking. It had probably just emerged that day or the previous, and was bright and unblemished.

A white-lined sphinx, Hyles lineata, also came in to the lights. This is a highly migratory species that moves up from the south, and some years we get large numbers.

John Howard, who was with us earlier in the evening, had this beauty show up at his house a few miles away the day before. He was good enough to bring it over for us to admire and photograph. It is a tersa sphinx, Xylophanes tersa. It resembles a stealth bomber. Tersas are another southern immigrant, and are uncommon at best here.

I was especially pleased to see this pink prominent, Hyparpax aurora, the first one I had ever seen. It somewhat resembles the much more common rosy maple maple moth.

This was another "life moth" for your narrator, the Harris's three-spot, Harrisimemna trisignata. Not one, but two of these winged works of art came in.

Seen head on, the Harris's three-spot looks like it's wearing goggles. As someone pointed out, it also looks rather spiderlike, and may be mimicking an arachnid (spider mimicry is indeed documented in other species of moths).

At least twenty-five of the spectacular giant leopard moths, Hypercompe scribonia, were at our sheets simultaneously.This species, while not rare, always attracts attention and I have had co-workers and friends bring them to me wondering what in the world they had found.

We pushed on this one's thorax to stimulate reflex bleeding. When harried by a predator, giant leopards can force drops of caustic yellow liquid from the sides of the thorax, which presumably is a deterrent to predators.

Earlier that day, we made a late afternoon trip to a nearby prairie. Our goal was to find two very rare moth species and we had success on both counts. This is a flower moth in the genus Schinia, but I cannot yet give you the specific epithet - the species has not yet been formally named. I've written about this moth's caterpillars before, such as HERE.

I had never before seen the moths in the wild, so it was a treat to find at least five of them on this day and obtain some nice images of free-flying individuals.

Dave Wagner thinks these flower moths are nocturnal, but one or two were on the wing and nectaring when we there. Probably because it was late in the day, and overcast. I was pleased to be able to photo-document them feeding at the flowers of their host plant, scurf pea, Orbexilum onobrychis. The nut does not fall from the tree. So far as anyone knows, scurf pea is the only host plant for the caterpillars, and the adult moths are found in extremely close proximity to the plants and obviously also nectar on them.

This tubular little moth was the other scurf pea specialist we sought - and found. It is the coppery orbexilum moth, Hystricophora loricana, and like the Schinia flower moth, its fortunes appear to be completely tied to scurf pea. This is a tiny moth that would be measured in millimeters. During the day, they rest atop scurf pea leaves, but could easily be dismissed as pieces of bird droppings or dead plant debris.

The latter two moths are great rarities, and probably should be listed as endangered in Ohio. Scurf pea, which is strongly associated with prairie habitats, is not nearly as common today as it would have been before people destroyed 99% of our original prairies. These moths, and undoubtedly other species, are likely relicts of a time when vast scurf pea colonies supported an abundant array of insect life.

I would have never guessed there were so many "creatures of the night" out there. Fascinating!
And what a neat way to see them.

These moths and photos are unbelievably stunning. I'm hoping to gear up for National Moth Week or soon after and am looking for tips on attracting moths.

From one of these photos, it looks like there's a mercury vapor bulb screwed into a socket connected to an electrical cord? Is that strung over a clothesline or something to hang near the sheet?

I'd like to buy a mercury vapor light but not sure what wattage or what it can be screwed into safely. Can it go into an ordinary trouble light? Probably not one of those halogen lights on stands they sell for car repair?

Is a white garage door as good as a sheet and should I use a sheet only to get closer to woods near my yard?

At a minimum I'm going to change all the outdoor porch/garage lights to CFC's that emit 100 watts of light.

Oh Jim. These photos are just so, so spectacular, so well shot and captioned. Thank you for bringing this incredible series to us. So nice to see David Wagner, too, who, like you, brings insects to the masses. Thank you thank you.

This is so great! Thanks for the report and the documentation! I've got to try this!