A pair of Festive Tiger Beetles, Cicindela scutellaris, makes love in the sand. If all goes well, they will spawn some of the most ferocious, nightmarish larvae that ever was.

There are about twenty species of tiger beetles in Ohio, and all of them are formidable hunters. If you have an eye for insects, you've probably seen some. Most common is the Six-spotted Tiger Beetle, Cicindela sexguttata, a glittering emerald-green beetle that frequents paths, woodland openings, gravel lanes, and other open habitats. All of the tiger beetles hunt by sight, as you might have guessed by the giant goggle eyes of the beetles in the photo. One would not want to be a potential victim in a tiger beetle's sights. They are said to be among the fastest land animals, proportionate to their size, their long stiltlike legs capable of propelling the beetle in astonishingly rapid bursts.

One prey is caught, it is sliced and diced with the beetle's long tusklike mandibles. While the adult beetles sound like bad news for victims, they're nothing compared to their larvae. I was recently with Laura and David Hughes, and they were kind enough to bring along a trio of tiger beetle larvae that they had captured and were keeping in captivity. Thus, I was able to make some images of these terrifying predators; something I had long wanted to do. 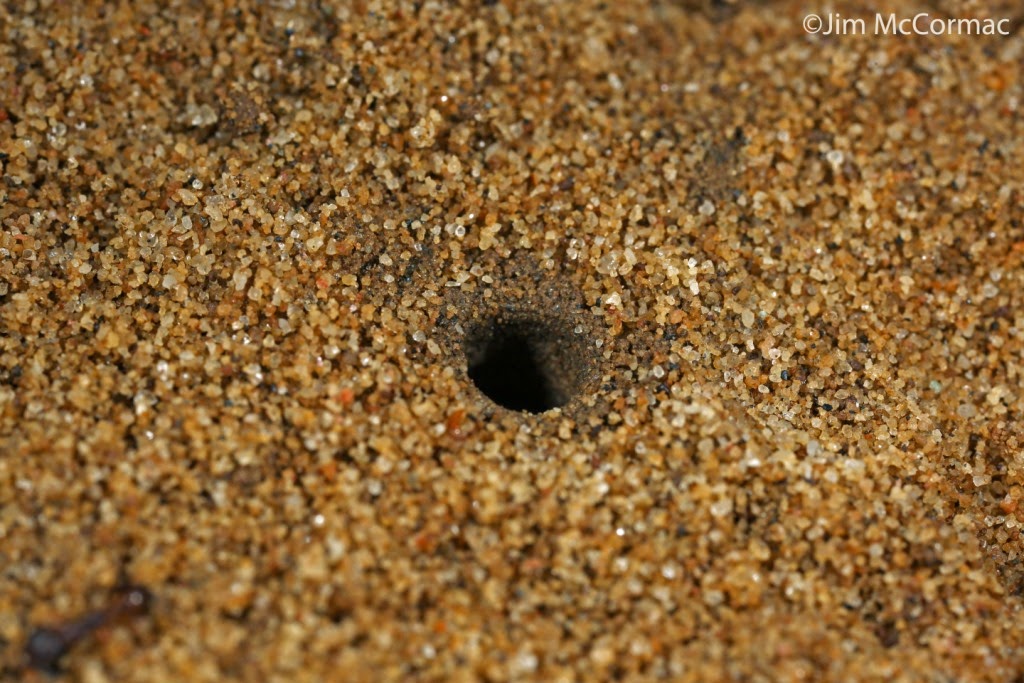 This hole in the sand is the lair of a tiger beetle larva (we're unsure of the species). It is about the diameter of a pencil, and would be easy enough to overlook. Laura and David found the beetle larvae on the gravel bar of a river - typical habitat for several species of tiger beetles. The larvae prefer loose sand for their burrows; sometimes clay or other types of soil. 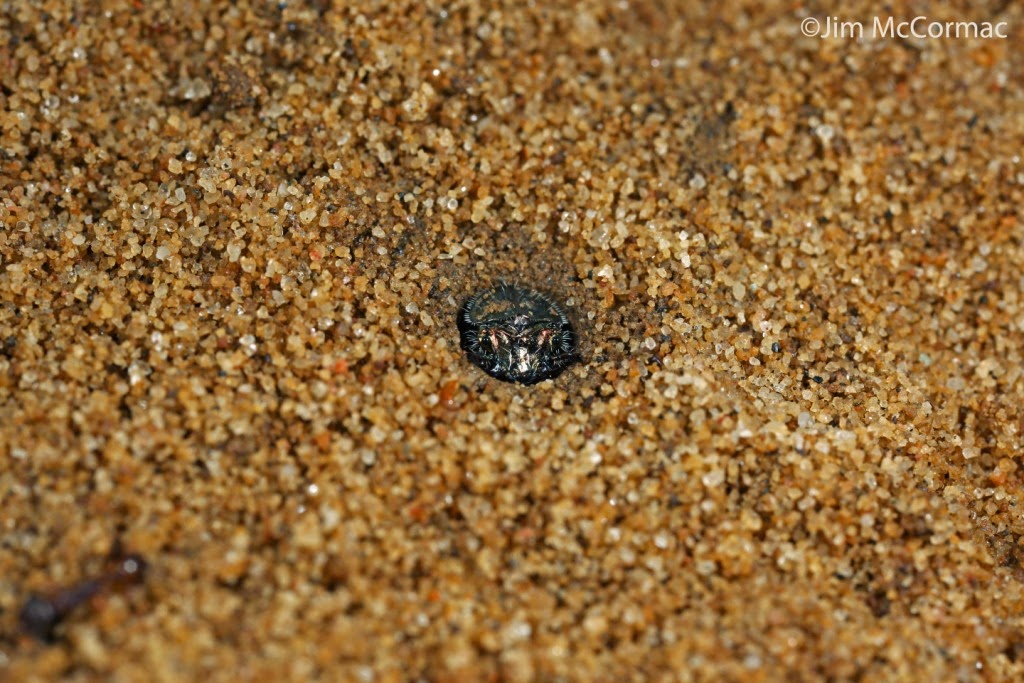 Wait! Something has appeared at the burrow's entrance! I'll tell you this right now, you wouldn't want to be small, and near enough to catch this mini-monster's eyes. 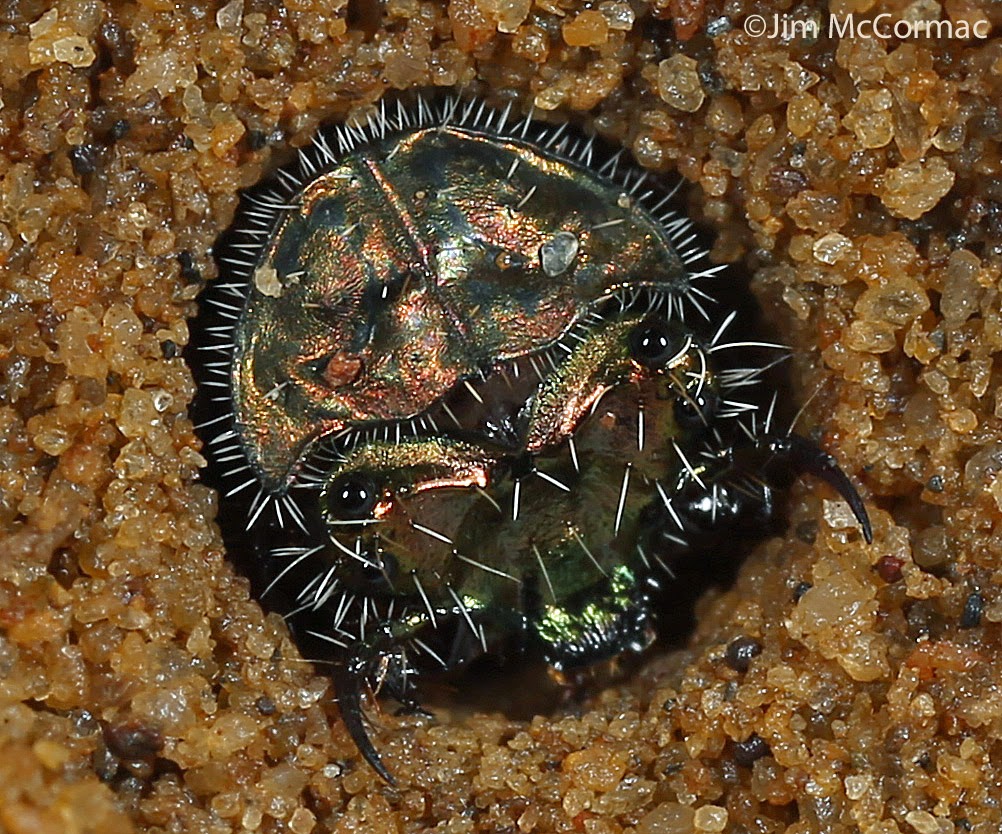 We zoom in, feeling fortunate that we aren't small enough to make a meal. This is the flattened head of the tiger beetle larva, which neatly caps the burrow entrance like some sort of murderous, living manhole cover. The beast is at an angle in the photo, with its mandibles protruding towards the bottom righthand corner of the photo. The "face" is above those - sort of heart-shaped, and separated from the rest of the head by a gap. Look closely and you'll see a set of eyes in each corner of the face, and another set of eyes below those.

The beetle larva's tactic is to remain frozen in place and flush with the ground. When an unsuspecting ant, or anything small enough to be overpowered moseys by, watch out! The larva will burst from the hole with impossible speed, and grab its victim. The fringe of white cilia-like hairs ringing the head may be there to help defend against the larva's predators. It doesn't matter how bad you are, there will always be something out to get you. In this case, it is certain parasitoid flies and wasps that atempt to get their eggs down in the hole with the tiger beetle. The eggs hatch quickly, and the parasitoid's larvae begin to consume the beetle larva. Perhaps those hairs, which form a sort of fence around the hole's perimeter, reduce the chances of this happening. 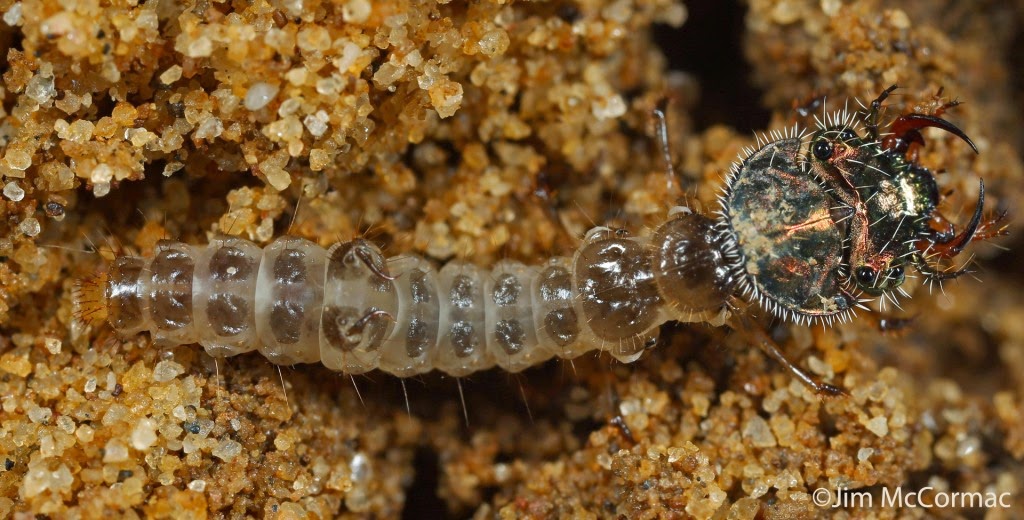 We extricated one of the tiger beetle larvae temporarily, so as to see it in all of its majesty. It's about an inch long, and the body, which is normally concealed, does look very much like a beetle grub. But it's as if some mad scientist has welded a Ceratops dinosaur head on the thing. As Dave Hughes said, they resemble one of those dragons in a Chinese parade. Note its formidable mandibles, excellent for seizing and dispatching prey. 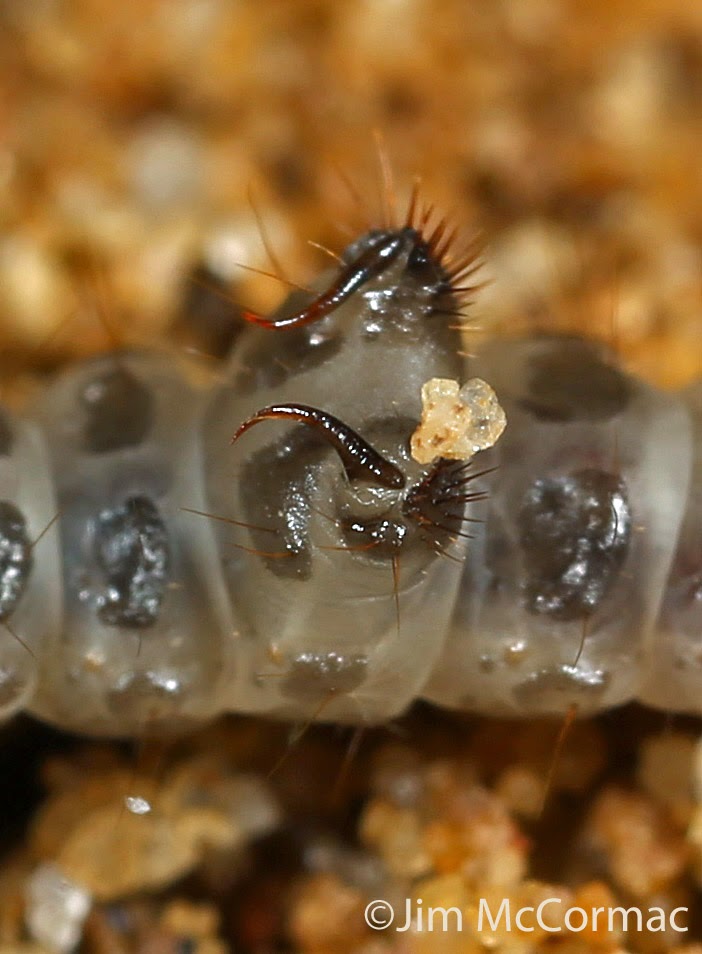 About two-thirds the way down the larva's body is a humped area crested with stiff bristles and two stout upcurved hooks. In the event the larva seizes something powerful enough to pull it from the soil, these hooks and bristles anchor it firmly against the burrow walls, preventing extrication. The whitish junk by the lower hook is a few sand grains. 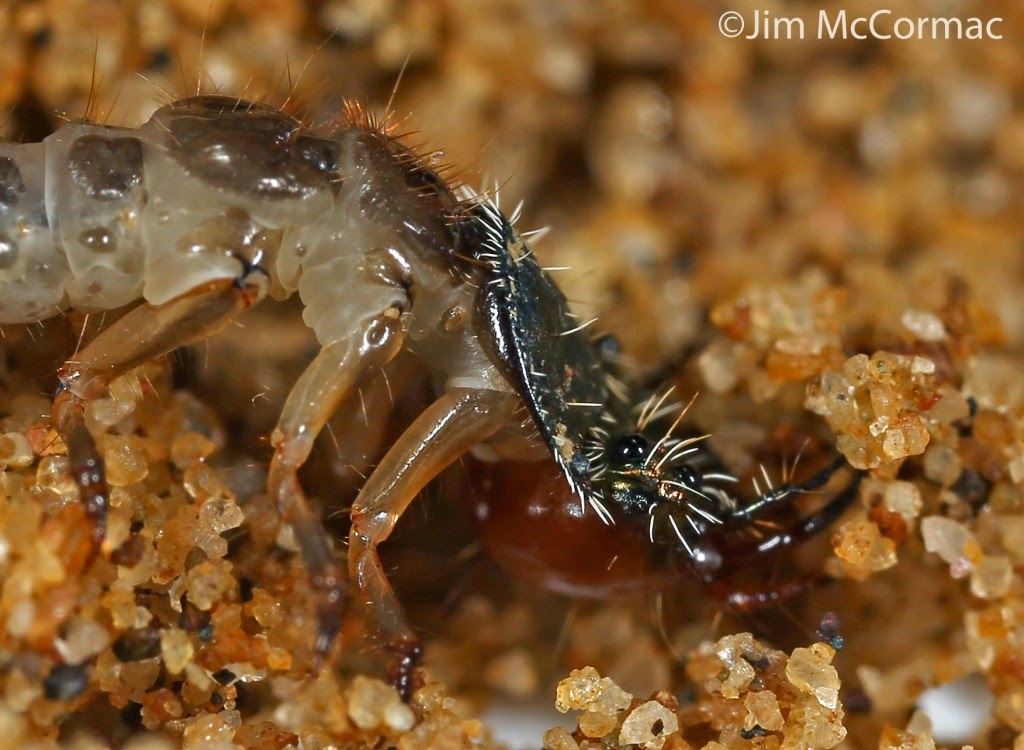 Note the beetle grub's powerful legs. It also uses these to secure itself in the burrow, and apparently to launch mad jumps. When disturbed above ground, the larva can spring itself wildly in the air in the blink of an eye.

Before long, the grub began trying to tunnel itself back under the sand. It is using its strong mandibles to excavate its burrow in this shot.

Well. You just never know what might be lurking underfoot. My appreciation goes to Laura and David for making this photo shoot possible, and for sharing their tremendous knowledge of natural history with me.

Wow...the photos and just overall appearance of this creature are simply stunning, Jim! Thanks for sharing!

Yes, it was a story line that kept me riveted, helped by the close-up photos!

That’s the best picture of the face I’ve ever seen.
These are fascinating creatures in all of their stages. I’ve enjoyed observing and studying them.
Thank you for your article and photos.
Michelle LaPrade