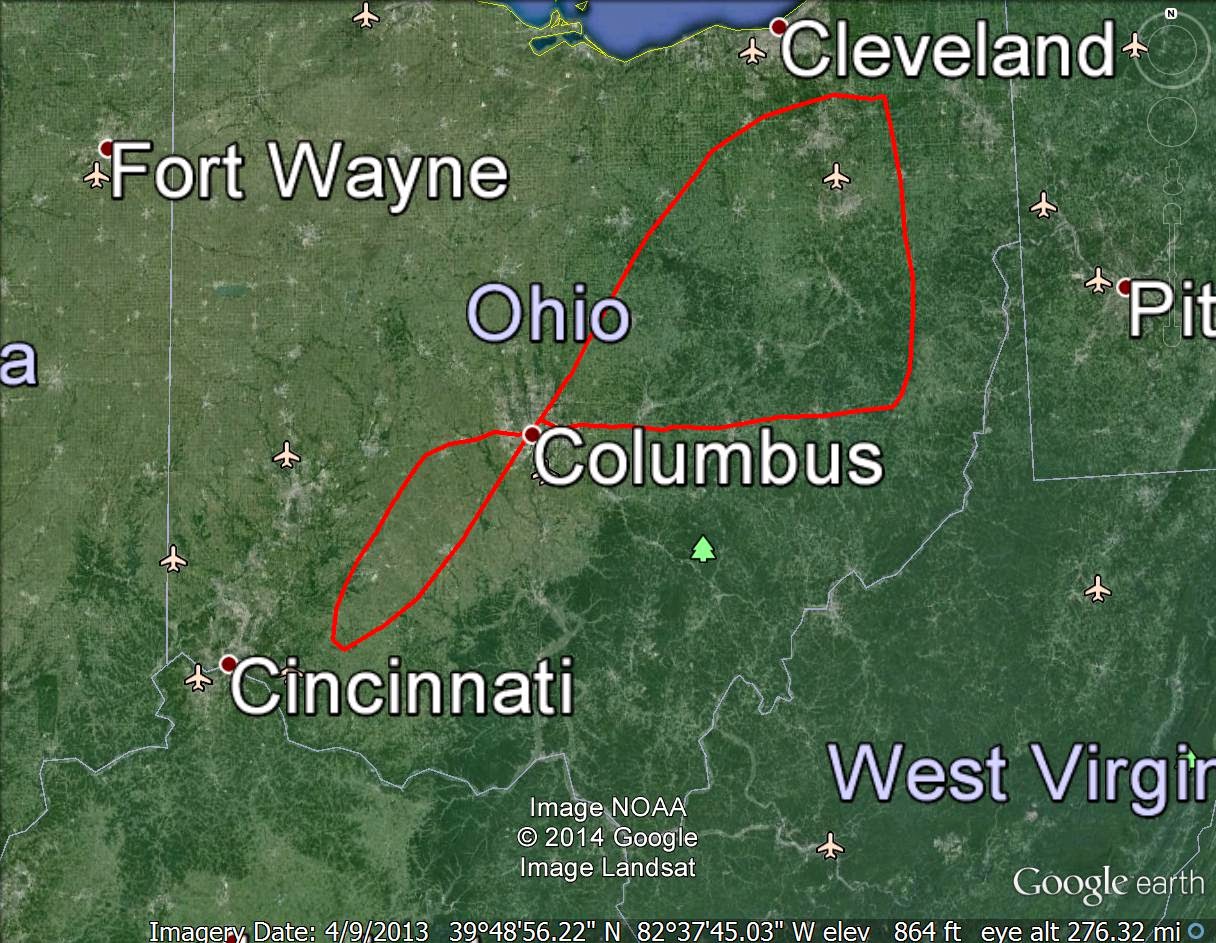 I didn't let much grass grow under my feet this weekend. Saturday, it was off to Caesar Creek Lake in southwest Ohio, where I met up with Ned Keller, Kathy McDonald, and Debi Wolterman to sort out last minute details for next weekend's butterfly workshop. The next day, it was off to see some of the coolest natural areas in Geauga County, then from there directly to Tuscarawas County where I joined in on some interesting moth-ing last night. Rolled back into Columbus about 6:30 this morning...

Of course, I had the camera in tow and was able to make a few images here and there. This is one of the prairie meadows at Caesar Creek, where we'll be taking field trips next Saturday as part of the aforementioned butterfly workshop. We saw plenty of interesting critters in this field, and other similar habitats. By the way, this image was taken with my iPhone 5S, which has a remarkable built-in camera (and video function). I often use it to document habitats, people, and places. 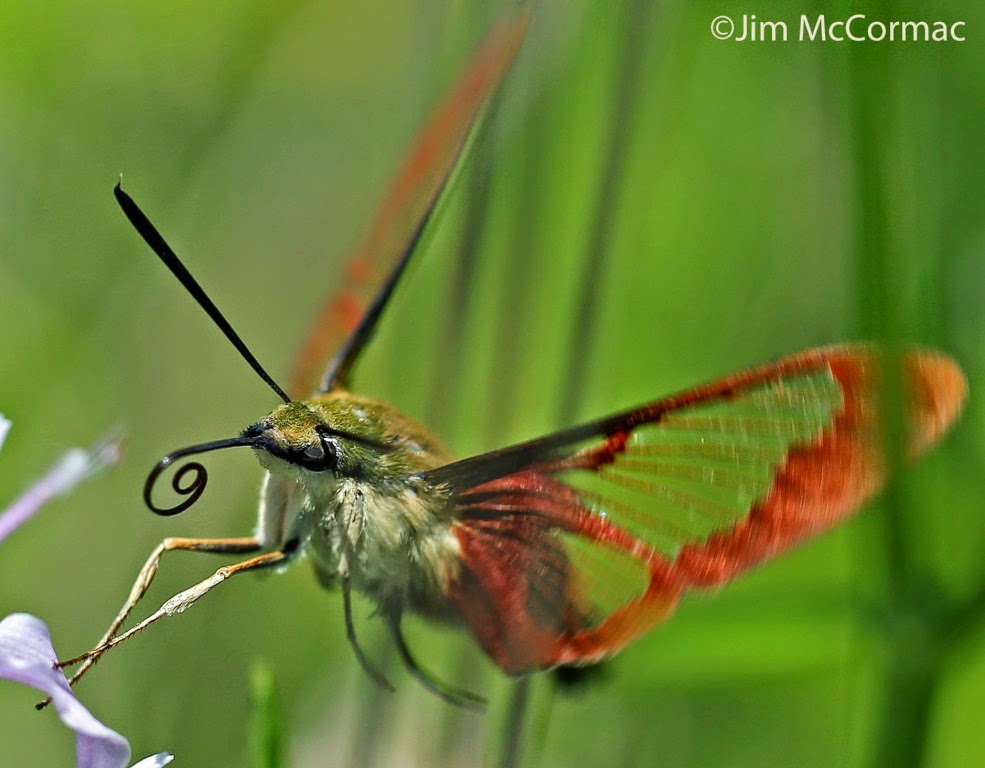 Of particular interest were some cooperative hummingbird moths. This is the species that you're most likely to encounter in Ohio, the hummingbird clearwing, Hemaris thysbe. It, and the other Hemaris moths are day-flying sphinx moths, and can be quite conspicuous as they take nectar at flowers. They're fairly tame, but that doesn't necessarily equate to easy photo ops.

As with real hummingbirds, these moths are quick and darty, and beat their wings at incredible speed. To freeze the action, more or less, one must use an extremely fast shutter speed. I made this image and the next with my Canon 5D Mark III at ISO 250, no flash, f/3.2, and a shutter speed of 1/4000. Even though I probably got some technically better images showing the entire animal in sharper focus, I like this one, as it illustrates the incessant speed of the moth as it moves around the flowers. Just remember to always focus on the eye - if that feature is sharp the rest of the image will usually fall into place. 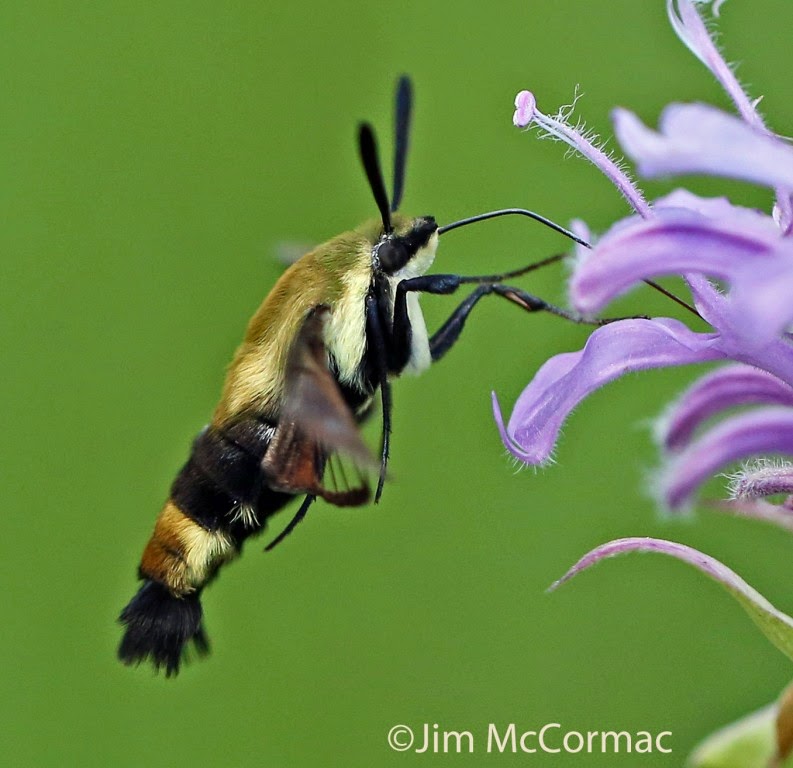 This is our other regularly occurring "hummingbird moth" in the genus Hemaris, the snowberry clearwing, H. diffinis. I don't see this one as often as the previous species, and was pleased to encounter both in short order on the same day. Note how much blacker this species is, even its legs.

All camera settings were the same for this shot as the previous, except I bumped up the shutter speed to 1/5000. Even that wasn't enough to fully arrest the movement of the wings, but the body of the insect is more or less tack sharp. For this shot, I made a conscious effort to shoot the animal from the side, so as to get better clarity of focus throughout its body. Setting up on feeding clearwing moths is made easier by their habit of systematically circling the flower heads of the wild bergamot, Monarda fistulosa, upon which they love to feed. The photographer can just kneel by the flower, and wait for the moth to work its way around and into good position for photos.

"...some of the coolest natural areas in Geauga County."

Oh! Where did you go???
(You can't write that and then not tell us!

Hi Ken, Lake Kelso, Calla Bog, and the Rapids Road crossing of the Cuyahoga River, where I saw my first river jewelwing!

You would really like the new figures in the garden at the Cleveland Metroparks' Ohio and Erie Canal Center: