A prairie comes to life 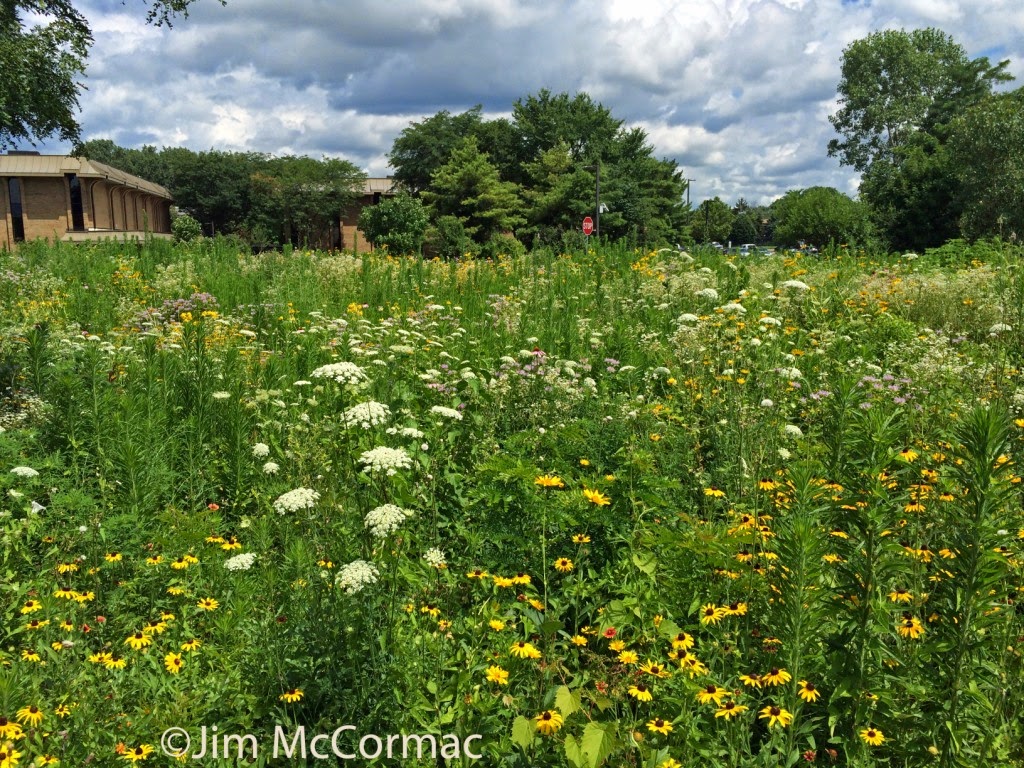 This is the approximate view from my office, in a very urban part of Columbus, Ohio. In 2012, this lush growth of wildflowers was barren mowed lawn, largely lacking in life. BORING, and not at all environmentally friendly.

I approached the powers-that-be, and cajoled them into allowing us to work with Bob Kehres and Ohio Prairie Nursery to plant the one-third acre grass-scape to prairie. We did so in May 2013, and Voila! I took the photo above today, of the prairie in its second growing season. An incredible transformation has taken place, and the prairie will only grow better with age, like a fine wine. 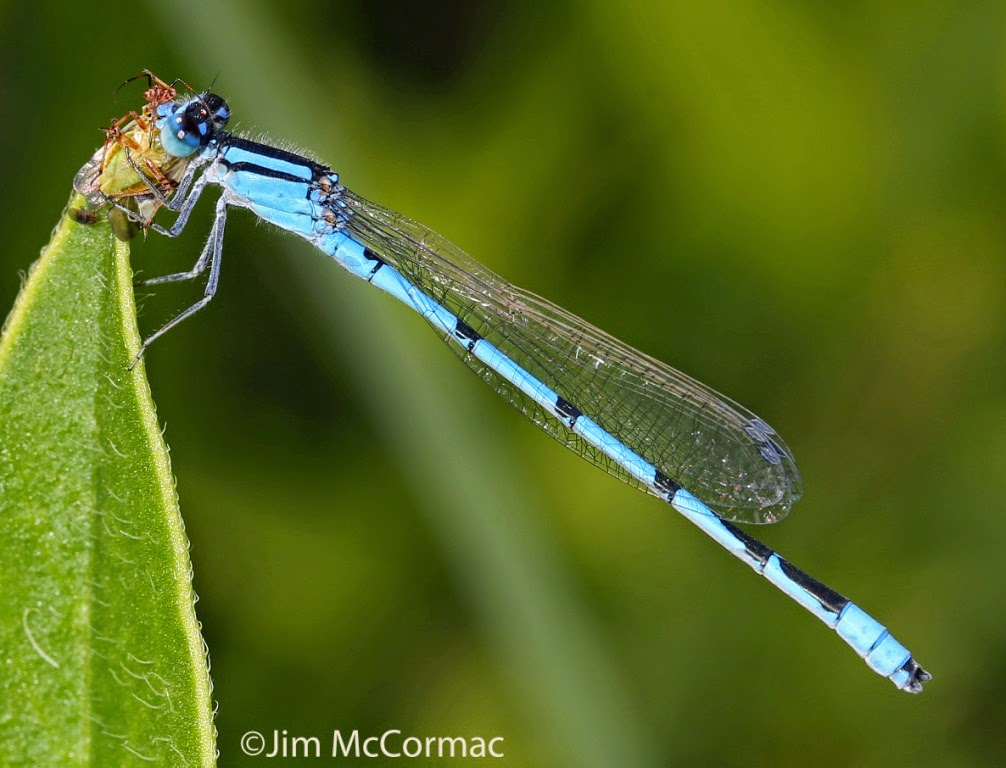 I try to take a few minutes to stroll the prairie, camera in tow, at least once a week. I'm very interesting in documenting the profusion of life that has resulted from removing a lawn monoculture, and replacing it with numerous species of plants that are (mostly) indigenous to this area.

The cast of new characters is already lengthy: moths, butterflies, hemipterans, beetles, bees, wasps, flower flies, and much more. We have even had a male Indigo Bunting hanging around the prairie this summer, a first summering record for our 22-acre complex. As he regularly sings from the boughs of a Honey Locust on the prairie's border, I assume that our new planting has created a good enough food source to keep him happy. Hopefully he'll eventually find a mate.

Today's brief foray was noteworthy for the number of dragonflies and damselflies that I observed. There were Widow Skimmers, Eastern Forktails, Common Whitetails, Halloween Pennants, Common Green Darners and Black Saddlebags, and others that I'm probably forgetting. I don't even know where all of these dragons and damsels are coming from. We have two small wetlands elsewhere on the complex, but I doubt they are producing all of the insects that I saw today.

In the above photo, a beautiful Familiar Bluet, Enallagma civile, makes mincemeat out of some tiny victim. It was one of many bluets hunting the prairie today. 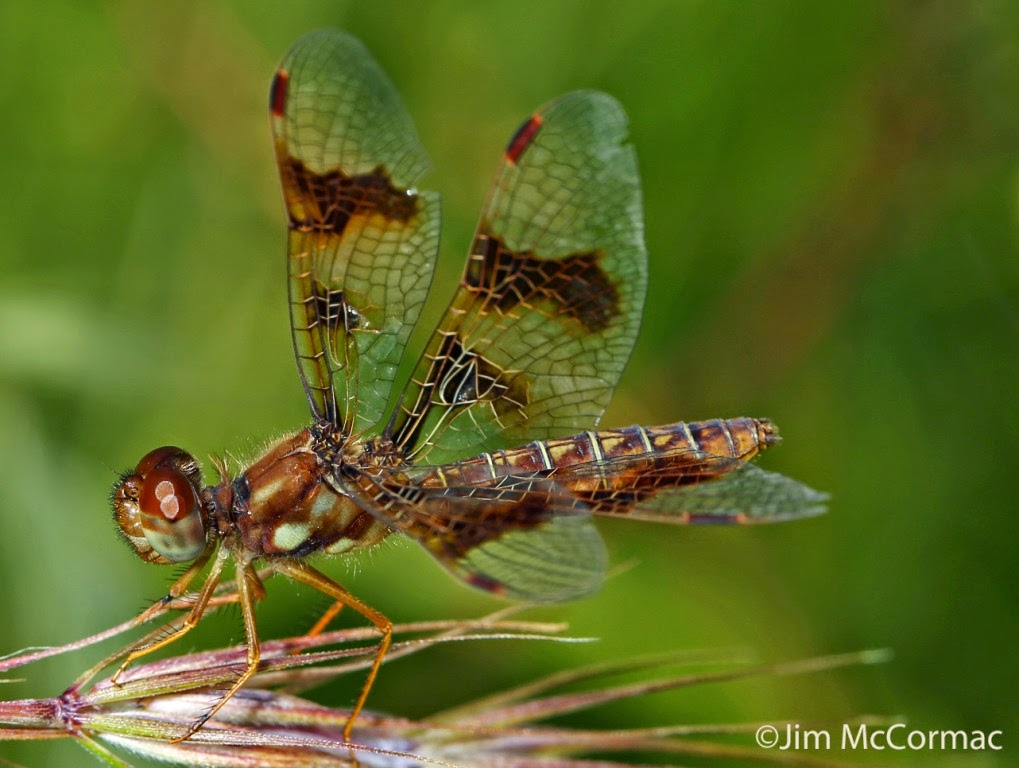 I was especially pleased to see several female Eastern Amberwings, Perithemis tenera. The females of this species seem to be wasp mimics, with their banded abdomen and habit of constantly twitching their tail end in the manner of a wasp.

Amberwings do reproduce in the wetlands on our complex, but they require surrounding buffer meadows to truly flourish. After mating and laying eggs, many female dragonflies leave the wetlands and the ruthless pursuit of the males that gather in such places. Providing an insect-rich prairie nearby is sure to lure lots of predatorial dragonflies, and my short trip into this prairie today provided ample proof of this.

If you plant it, they will come. I look forward to seeing that other wondrous beasts turn up in our prairie as the season progresses.

Far far better than a lawn. I despise lawns and wish they would be banished. Can you imagine the pollution and gasoline from mowing that would save annually? They might be a bit more costly up front, but the savings in energy and labor more than makes up for that over time. I hate driving past companies with acres of perfectly mown grass. Why not a pond and prairie?
Great job convincing the powers that be. And sorry about the novel--I think this post struck a note!

I love hearing stories like this about the conversion of boring monotony to life-filled environs! Glad you're documenting the changes, too. It's exciting to hear about.