As chance would have it, my route yesterday took me (somewhat) near the legendary Sandy Ridge Reservation in Lorain County (a Lorain County Metro Park). Scores of notable birds have been seen here over the years, in large part because of the reservation's sharp-eyed and knowledgeable naturalist, Tim Fairweather. A two mile long path cuts through mature woods then circles some large wetlands. I had only been to the nature center once or twice to give talks, and had never seen the real meat of the park. Time to correct that, so I grabbed some camera gear and took to the loop trail to see what I could see.

I had barely broke free from the woods when a distant menacing shape caught my eye. There, perched on a snag in a dead tree out in the wetland, was a Merlin. These muscular little falcons are among a small bird's worst enemies; feathered Freddie Kruegers. I had scarcely registered the Merlin when the male Downy Woodpecker in this photo bounded in low over the marsh and swooped up into a nearby tree. It apparently had been out working the drowned snags, and the Merlin came in too close for comfort. The woodpecker pressed itself to the trunk, and remained quite still for several minutes. In the photo, it is casting a glance backwards in the direction of the predator. Shortly after the Merlin departed, the woodpecker skedaddled to somewhere else.

Such uncharacteristically frozen postures are sometimes adopted by songbirds and other small birds such as this woodpecker when avian predators are close at hand. You've perhaps seen chickadees or other feeder birds do it when a Cooper's Hawk barrels into the backyard. I have heard this behavior termed "sleeking", as the potential victim presses its feathers down and attempts to become one with its surroundings. It's probably not the best descriptive word for this, but I've always liked the sound of it. 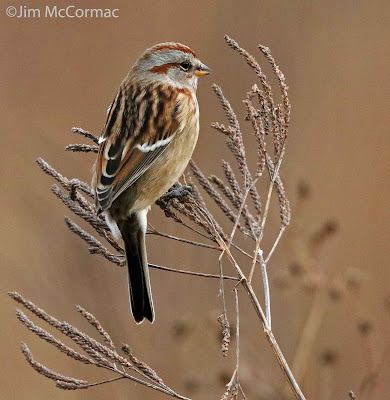 Towards the end of the loop around the large wetland, I encountered a small flock of American Tree Sparrows. Their airy crystalline tinkling notes gave them away well before I got near, and I was prepared to try for some imagery. If I were ever forced to name a Top 10 list of favorite birds, this species would be on it. And one can never have too many photos of a Top 10 favorite bird, especially one as delicately stunning as this.
The animals were not put off by my furtive skulking, and I was able to observe some of their food choices. I was pleased indeed when the sparrow in the photo alit atop this old withered inflorescence of blue vervain, Verbena hastata. My first reaction was to the pleasing aesthetics of the situation, but became more meaningful when the bird began avidly ripping seeds from the candelabra of cylindrical flower (now fruit) spikes. This was not a plant that I've observed American Tree Sparrows feasting upon before.
American Tree Sparrows, when they arrive at these southerly latitudes for the winter (I've written more about this species HERE), are much tied to open meadows that grow a diversity of herbaceous plants that produce bumper crops of small seeds. Goldenrods are especially favored, but the sparrows feed on a wide variety of other plants, especially those in the sunflower family (Asteraceae). Over the long haul, I am sure these plucky little sparrows are major dispersers of many of these plants.
Unfortunately, prime American Tree Sparrow (and many other songbirds) foraging fields are all too often thought of as weed fields. While nearly everyone gets up in arms over protecting bogs, old-growth forests, and prairies, the much more mundane goldenrod and aster-dominated meadows are shrinking away, the victims of various development. These common and largely ignored meadows are biodiversity factories, and even fuel topnotch beauties such as the American Tree Sparrow.
﻿
at November 30, 2015

that is why the 2 acre lot we own next to our home was not mowed this fall,it always tough to find a suitable time for brush-hoggin. I watched a junco,chickadee,titmouse,and 2 car wren working a 4ft strip of leftover coneflowers next to the backporch.

I saw this freezing behavior at the feeders in West Creek Reservation last year. A downy was pecking at the suet when a Coop perched in a tree nearby. That little woodpecker froze and did not move for at least 10 minutes until the hawk left. The other birds at the other seed feeders fled.

I have another freezing story to share. This was strange; but, it was VERY cool. There is a well-known wetlands north of the Route 82 bridge in the CVNP where the bald eagles nest. They open up the area if the nest fails or after the youngsters fledge. It is also a good place to see red-headed woodpeckers. The redheads breed there.

I was walking in that area a few years ago. I saw a pileated woodpecker low on the side of a big dead tree. I thought the big bird was dead because it was rigid - stiff as a board. It was close to the walking area. So, I walked up to it. I had a camera. But, I didn't take a photo because I thought it was dead. I could have reached out and touched it. But, I really don't like to shoot dead animals like this.

I think the frozen woodpecker was a juvenile. The pileated woodpeckers do breed in that area, as well.

The adult is on the left; and the youngster that froze is on the right in this shot:
https://flic.kr/p/8LDzim

Here you can see the youngster on the left climbing the tree. The red-head is on the lower left flapping its wings frantically. The adult pileated is on the right.
https://flic.kr/p/8LDzkJ

When it was all over, I wished I had taken a shot of that "dead" youngster with my hand next to it. What a crazy thing to be that close! But, seeing the whole confrontation between the two species was cool. I wasn't too disappointed.