Today is something akin to a national holiday in these parts - the annual Ohio State Buckeyes vs. Michigan Wolverines football game. This matchup has taken place since 1897, interruptedly, and annually since 1918. It's huge; easily the most important game of the year for these schools. I wouldn't miss it if at all possible.

Since it was a noon game, there was little time for any sort of full blown excursion. But my trigger finger was itching, and I really wanted to shoot something. Fortunately, a light rain had fallen more or less steadily all night and into the morning. The precipitation made for prime conditions for the photos that follow. 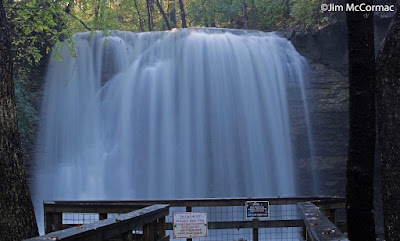 Back on October 29, I made a visit to a local hotspot and one of Ohio's most beautiful waterfalls, the Hayden Run Falls. I wrote about that, with photos, HERE. That trip came on the heels of a torrential gulley washer, and the falls were raging. The above photo is one that I made that day. I couldn't keep the camera trained on the falls for more than a shot or two, due to the prolific mist of atomized water drifting onto the lens. There is such a thing as TOO much water when shooting waterfalls, at least sometimes. 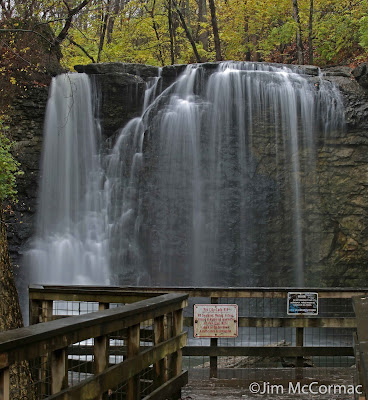 Hayden Falls, as it looked this morning at first light. The volume of water cascading over the 25 foot cliff is heavy, but much less than in the previous photo. Just about aesthetically perfect, to my eye. Where the heavy flow looks cool, it lacks details and resembles a dense watery curtain. Today's lesser flow produced nuanced details. The limestone cliff face appears opaquely in the backdrop, and individual flumes of water separate from one another. Many cascades are produced where torrents hit small ledges and atomize. Perfect.

Also, by getting there at first light, two good conditions were met. One, the completely overcast sky made for perfectly even lighting, and allowed for the use of very slow shutter speeds. Sunny conditions are not good for waterfall photography. The resultant dappling of light and shade creates uneven conditions, and bright light makes it harder or impossible to use a desired VERY slow shutter speed. Two, by going early on a misty morning, there are no other people present. This place, understandably, has a magnetic lure and rare is the time there are not visitors standing on that platform ogling the falls. 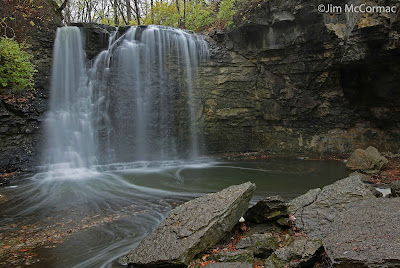 Small wonder that nearly everyone who picks up a camera wants to make waterfall shots. They are beautiful highlights of the landscape. In its most base form, shooting a waterfall photo is simple. Just point your camera at it and snap away. You'll probably get something OK; maybe even something your friends will ooh and aah over.

To really try and capture the artistry of a gorgeous waterfall requires a bit more effort. A tripod is essential due to the slow shutter speeds that should be used. Having the camera stationary on a tripod also helps immensely in composing the image. For this shot, I wanted the falls to the left in the image, and much of the cliff face and the rocky grotto showing on the right. The huge limestone slabs in the foreground create interest, and I made sure to include as much of those as possible. I absolutely detest the invasive nonnative Amur honeysuckle, Lonicera maackii, but there was no way to keep it out of the shot short of major post-editing Photoshop work (and I am a post-editing minimalist). So, I used its still green foliage to provide some colorful punctuation to the left, and above, the falls (really had little choice).

I made these images with my Canon 5D Mark III, and it has a cool device helpful for composition - an electronic level that can be shown on the back screen. It lets you know when the field of view is perfectly flat. An inexpensive remote shutter release plugged into the camera allows for tripping the shutter without touching the camera and possible introducing some shake. So, when all looks good just stand back and pull the trigger. This shot was made with the amazing Sigma 24mm f/1.4 Art lens. Settings were f/16, ISO 100, 4 second exposure. The very long exposure softens the falling water, and creates the interesting plumes of whitewater trailing away from the base of the falls in the pool below. 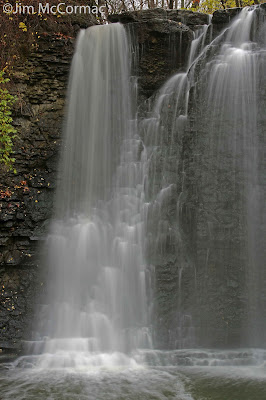 To me, the left side of the falls was the most visually interesting. So, I clipped on another great landscape lens, the Tamron 70-200mm f/2.8. This focal range is superb for a great diversity of shots, and is a must for the camera kit. The Canon version is significantly more expensive, and I can't imagine it is much if any better than the Tamron. I've gotten many keepers out of this lens. Shooting this perspective was a natural for a vertical orientation. The lens was zoomed ever so slightly to 79mm, and the settings were f/11, 0.8 seconds, and ISO 100.

Framing was dictated by a few factors. One, I couldn't get back any further or the handrail of the boardwalk would appear (It's prominently posted not to leave the boardwalk. Better compositions could be made if one did, but abide by the rules). I wanted to pull in tight on the left side of the falls to carve out as much of that blasted honeysuckle shrub as possible. And I wanted that cool looking mini cascade of water fluming over the cliff at the top right of the image to be in the frame. Voila! The effect is of a junior Niagara Falls right here in urban Columbus, Ohio.

I don't understand a word you say about camera settings-but WOW--you do indeed get the shots. Very nicely done.

Though I do get out early to avoid crowds, the main reason is ---the silence--you really get to hear nature. One also gets the benefit of seeing much more wildlife. It's heaven!

BEAUTIFUL JIM ! Thanks for the info will try to duplicate your instructions on our next adventure.