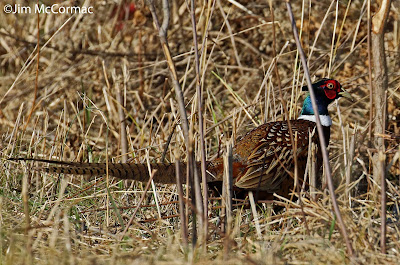 A rooster Ring-necked Pheasant skulks through thick brush in north-central Ohio last Saturday. I saw a number of these flashy birds on this day, and many orange-coated hunters trying to bag one. Pheasants are as tasty as they look.

Ring-necked Pheasants are not native here, as I'm sure you know - they hail from Asia, but have been intentionally spread far and wide. Efforts have been made to establish pheasants in nearly 50 countries, with varying degrees of success. The only continent that has been spared the ring-necks is Antarctica, where they'd have no chance at all.

This spectacular bird can fare well in North America, if conditions are right. Indeed, South Dakota has become a Mecca for pheasant hunters, and the Mount Rushmore State even boasts the world's largest piece of pheasant statuary, a behemoth effigy standing 20 feet tall and extending 40 feet from breast to tail tip.

Apparently ring-necks were first released in Ohio in 1896, and while they've had their ups and downs, releases are still widespread and regular. They do fairly well in some areas that still have decent habitat, but are nowhere near as frequent as they were in the early to mid 1900's. The birds that I photographed here were probably very recent releases. 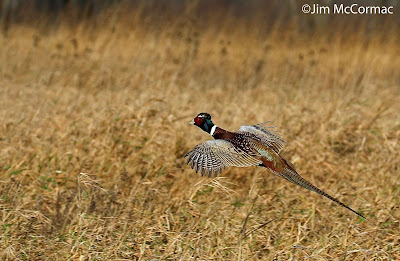 A rooster ring-neck whirring across a late autumn field of browned grasses makes for a pleasant pheasant sighting indeed, and even though I will never put these birds on the same plane as our native species, they do make irresistible eye candy.

I was, as the Boy Scouts say, "[be] prepared", and that's how I got this shot. When cruising interesting country, I like to have the bird camera on the front seat and ready for action. While slowly trolling a backroad, I spotted this bird slinking through the grasses. I stopped the car, camera in hand, and quietly attempted to exit the vehicle. That was too much for the bird, and it took wing, heading for the meadow on the opposite side. It gave me enough time to click off a few shots before it dropped into thick cover.

The image was made with the Canon 7D Mark II and Canon's 100-400 f/4.5-5.6L II lens. This combo is, for sure, one of the best for shooting birds, in flight or otherwise. Settings were f/5, 1/1600, ISO 100, and exposure compensation -2/3rd. I had the camera set on aperture priority and ISO on auto. For the place and conditions, those were good general default settings in case something happened fast and there wasn't time to fiddle about. As always now, I used back button focusing (read Art Morris's nice description HERE). The 7D has 65 focus points, and they are adjustable in many ways. When knowing or suspecting that I'm going to be shooting larger birds, I usually have the center point active as well as the four surrounding points. That was the case here. This gives a nice tight block of five clustered focus points, and if you're tracking the quarry smoothly, you ought to connect with one of them. Of course, the camera was set on high speed burst mode, and in the 7D's case that's 10 shots a second. It's like a photographic machine gun, and such rapid bursts up one's chance of getting a keeper. In spite of this, by the time I acquired the bird in the lens, and hit the shutter, I only got off a partial burst before it vanished into the grasses.

While all or some of this may sound complicated, it really isn't. A little study will break it all down easily enough. The cameras and associated gear grow ever more amazing, and we might as well try and take advantage of what they've got to offer.